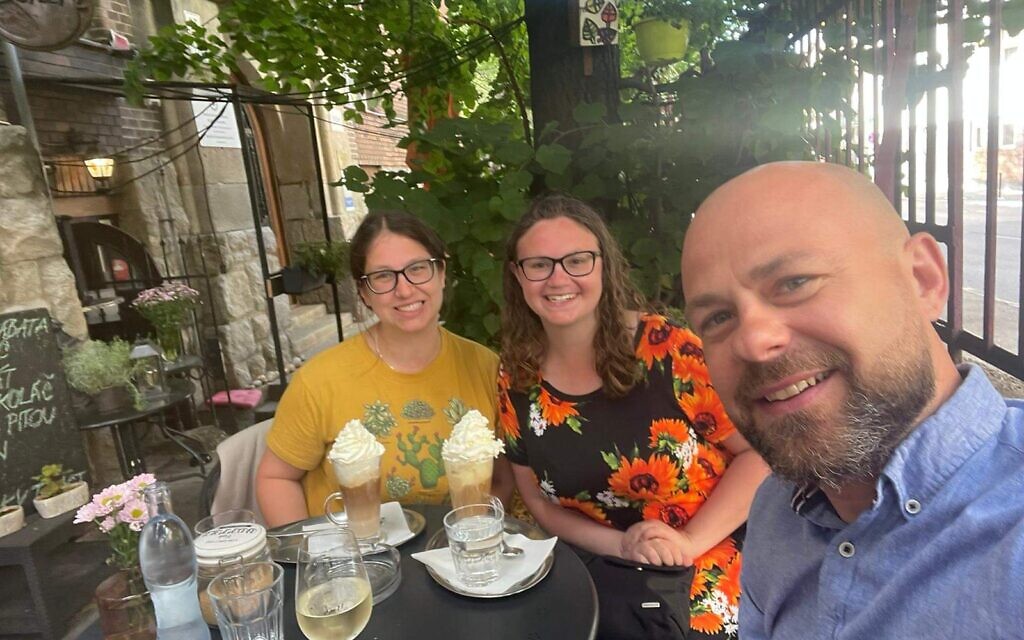 “Are you visiting Bratislava? a man asks us. He wears a white button-up shirt and approaches my friend Deanna and I in the garden courtyard behind the Heydukova Street Synagogue, the Orthodox synagogue in the Slovak capital.

“Yes, we are only here for the weekend. Where are you from?” I reply.

He is from Israel and is traveling through Europe on a kosher cruise. I switch to Hebrew.

The man smiles and seems pleasantly surprised that I speak Hebrew. We have a conversation about where I learned Hebrew and what Deanna and I are doing in Bratislava. I am delighted to be able to maintain myself in a language which I have not spoken for a long time. He mentions that a few minutes earlier, in the sanctuary for Shabbat morning services, he sat next to a person who spoke Slovak but not English. The two were able to communicate using Hebrew. Hearing this story is one of my favorite moments during the trip so far: realizing how much a Jewish language can connect Jews around the world, no matter where we live.

I arrived at Petržalka station around 1:30 p.m. on Friday. It didn’t take long to find Oliver, the global Jewish correspondent who hosted us while we were in Bratislava – he’s lived in Bratislava all his life but was holding a medium sized Israeli flag under his arm.

Oliver had meticulously planned a busy itinerary for our weekend in Bratislava. Two hours after our arrival, we headed to the Museum of Jewish Culture. The museum is located right on Židovská Street (Jewish Street), the only area of ​​the city where Jews were allowed to reside from 1599 to 1840. The museum is inside one of only two buildings in origin remaining in the street. Finding a Jewish street in cities all over Europe always comforts me; I’m proud to be a returning Jew on a Jewish street.

I was surprised that in the 15 minute walk from my hotel to the museum, we came across an outdoor public exhibit about a synagogue that once existed in this very space. I learned that the synagogue survived the Holocaust, only to be demolished in the 1960s by communists building a bridge.

Throughout the weekend I came across many plaques dedicated to well-known Bratislava Jews, stolpersteine ​​in memory of where Jews once lived, and a memorial to Raoul Wallenberg, a Swedish humanitarian who saved thousands of Jews in German-occupied Hungary during the Holocaust.

The director of the Museum of Jewish Culture offered us a private guided tour of the museum. It was small and simple, with a few rooms focusing on the basics of Judaism: what is kashrut, what is a Torah scroll, what are Jewish holidays. The museum is intended as an educational resource for Bratislavians and non-Jewish students. It is state-owned, a component of the Slovak National Museum, which has eight separate buildings, each representing a minority in Slovakia. It’s different from the Jewish Community Museum, an independent private museum I visited later this weekend, established by the Jewish Community of Bratislava. Its exhibits focus specifically on Jewish life in Bratislava and the surrounding region.

But the city is not only home to Jewish heritage sites; there is also a small but present Jewish community. After visiting the Museum of Jewish Culture, we climbed a hill to reach a building with a hall on the ground floor where Reform Jews gather for Kabbalat Shabbat services every two weeks. I thought how unfortunate it is that non-Orthodox groups are relegated to renting an area of ​​a local building instead of meeting in historic, preserved synagogue buildings as the Orthodox do. Although I prefer the small size of European congregations compared to American congregations, it would be nice if prayer groups of various Jewish backgrounds could be housed in real synagogues.

The service started and I recognized most of the tunes from my conservative American Jewish upbringing. We arrived at Adon Olam, and the rabbi across the room asked what tune Deanna and I knew. We told him, and he started singing. Then he asked for another piece.

“Our community doesn’t know the tune we just sang,” he said. “Every country and every community has a different melody. Our community knows that one,” he said, referring to the second track I suggested.

As we stood in a circle after services, holding glasses of wine in preparation for kiddush, a member asked us how our services in the United States differed from what we had just experienced in Bratislava. The Jews of Bratislava were as interested in learning from us as I was in learning from them.

As we drove back to the hotel that evening, we discussed Jewish identity with Oliver. He asked if we planned to raise our eventual children as Jews. “Do you ever take your children to the synagogue? I answered. Instantly he said no.

I was puzzled. A wave of sadness passed through me, as I thought about the possibility of Oliver’s legacy being lost with future generations. Oliver discovered later in life that his father was Jewish. Her mother is not Jewish. Oliver decided to immerse himself in Judaism and became involved in the community. He found a place that welcomed him and he clearly knows the local Jewish life. Yet, even though his Judaism was hidden from him for years, he is now doing almost the same thing with his children: keeping them out of the Jewish community. He explained that his wife is not Jewish, so they decided to wait until their children were older and then maybe give them the option of seeing a synagogue.

I understand that children are given a choice. I have observed that many European Jews become more involved in Jewish life when they are older – compared to some American Jews – because of the sense of choice they have with religion. But part of me wonders why Oliver doesn’t feel more drawn to his family remaining connected to Judaism.

Judaism is very present throughout the Old Town of Bratislava, in one way or another. As we strolled through the weekend, Oliver pointed out the Jewish community complex and Ohel David, the Jewish retirement home. The synagogues have little to no security – it’s a very safe city and Oliver has never experienced anti-Semitism.

Anti-Semitism, however, is not the only thing that can lead to a decline in Jewish life. I hope the Jews of Bratislava will find a way to continue transmitting Jewish culture and practices for years to come. PJC

Madison Jackson is a graduate student in Chatham University’s MFA program in creative nonfiction writing. She lives in Squirrel Hill and is the founder and executive director of the Global Jewish Pen Pal Program. She is traveling across Europe this summer and writing for the Chronicle about Jewish life in various places.