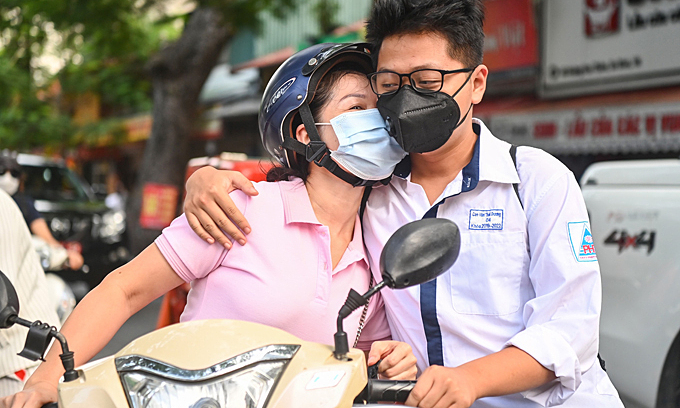 They started with a two-hour literature test starting at 7:35 a.m.

They had to be at the exam site by 6:45 a.m., but many decided to take no chances and arrived early.

At Yen Hoa Middle School in Cau Giay District, no one showed up late. Thanks to generous sidewalks and police directing traffic, there was no congestion at the school gates.

The students’ family members were directed to Yen Hoa Primary School and the nearby Cau Giay District Cultural House to wait.

At Nam Trung Yen middle school, Hoang Viet, a 20-year-old army recruit, said he arrived at 6 a.m. to take the exam. His platoon is stationed just two kilometers away so it didn’t take him long, he said.

More than 40 volunteers were stationed there to help students go through the procedures.

Outside the school gates, some parents went back and forth asking for volunteers to check the documents to make sure nothing was missing.

In Can Tho, more than 12,000 students took the exam on Thursday morning.

After completing the literature test in the morning, students will take the math exam starting at 2:30 p.m.

On Friday, they will take the exam in natural sciences (physics, chemistry, biology) or social sciences (history, geography, ethics) in the morning and the foreign language test in the afternoon.