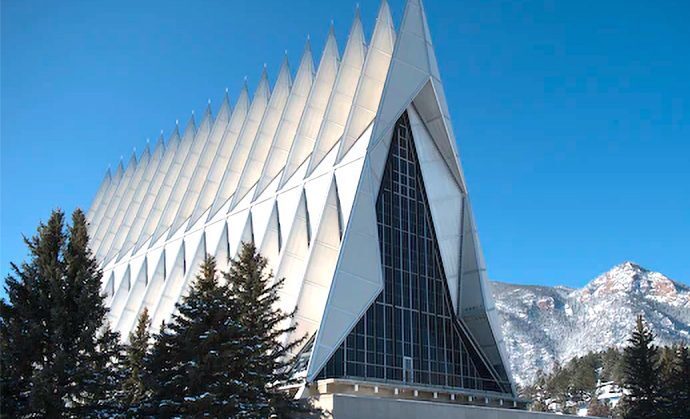 In his final slap in the face to his Jewish cadets, the ever-religious-diversity-challenged This year, the Air Force Academy has scheduled its “Commander’s Challenge”, the most important training day of the semester, on October 5, perfectly timed to fall right in Yom Kippurthe most solemn of all Jewish holy days, forcing Jewish cadets to choose between their religion and joining their favorite Christian counterparts on a day of training that the Jewish Telegraph Agency (JTA) described as “the key to advancement within the academy”.

As Military Foundation for Religious Freedom (MRFF) Founder and President Mikey Weinstein wrote last week in his article “Air Force Academy Again Elevates Jesus and Trashes Jews,”The top-level command structure of the United States Air Force Academy clearly did not care to spend the minimum milliseconds he would have taken in doing his religious due diligence and dissociating this important military training event from the solemn religious observances of his cadet population. Thus, it has clearly excluded a segment of its (cadet) student population, causing not inconsiderable and humiliating pain and embarrassment.

You want an example of the kind of pain and embarrassment this is”planning monitoring“, as the Academy somewhat unconvincingly calls it, caused? Look no further than the following email from the relative of a Jewish cadet who not only was forced to make the agonizing decision to miss the Yom Kippur services, but was told by a senior cadet in her chain of command that the problem was that she “was Jewish”, suggesting that she “at least make an effort to try Christianity”, inviting her to a Bible study and telling her that she would not “convert to Judaism”, but rather that “Christianity is only an enlightened Judaism”. In the words of her parents, this youngest was “humbled beyond description” and “was more discouraged than we had ever heard of her before”.

I am the parent of an Air Force Academy cadet. We are a Jewish family and we cannot thank you enough for all the work you do every day to prevent Christian religious extremism and especially nationalism from afflicting our military.

Our daughter just made the difficult decision not to attend Yom Kippur services at USAFA because it fell on “Commander’s Challenge” day this week.

She is doing very well academically and athletically but her military performance rating needed to be improved and she feared that she would suffer there irreparably if she chose to go to services on Yom Kippur and not participate in this day “Commander’s Challenge”. “.

In making this decision, something horrible happened to him.

She was asking a senior USAFA cadet in her chain of command for her opinion on what to do and he told her the problem was that she “was Jewish.” He suggested that she at least “make an effort to try Christianity” and invited her to one of their bi-weekly Bible studies from the cadet squadron he apparently leads with others.

Our daughter was shocked and immediately told her she had no interest in changing her Jewish faith. The senior cadet replied that she shouldn’t see this as a “conversion away from Judaism”, but rather that “Christianity is only an enlightened Judaism”!

Our daughter was insulted and humiliated beyond description. Is this USAFA’s idea of ​​”Spiritual Fitness”?

This person is in her direct chain of command at USAFA, so she politely excused herself from the meeting and went back to her room. She called her father and me soon after and was more discouraged than we had ever heard from her before.

We were understandably furious. We asked our daughter to call you because we signed up to be MRFF clients even before our daughter started at USAFA.

She was afraid of causing more trouble if she did but agreed that we contact you on her behalf to make sure the MRFF knew what had happened.

We don’t want the MRFF to do anything other than know that issues of Christian religious bullying and anti-Semitism still happen all the time at USAFA.

Telling our daughter that “Christianity is enlightened Judaism” is just one outrageous example. We can only wonder what my grandparents would think of this, as they were both Nazi Holocaust survivors from Dachau and Mathausen concentration camps.

His father and I wanted Mr. Weinstein and the MRFF staff to know that we very much appreciate the public stance you all have taken on behalf of Jewish cadets and their families during this mess of Yom Kippur planning with the “ USAFA Commander’s Challenge.

USAFA’s apology for how this happened is pathetic and only serves to further the goals of unwarranted Christian proselytizing at the Academy.

To refute the Air Force Academy’s weak “schedule monitoring” allegation, the MRFF on October 6 submitted a FOIA request to the Academy requiring: “Any internal documents or communications, electronic or otherwise, between any USAFA faculty or personnel regarding concerns, warnings, and/or objections to scheduling “Commander’s Training Day” and/or “Commander’s Challenge” on October 5, 2022, a date that coincided with the great Jewish holy day of Yom Kippur.

While everyone will be talking about anti-Semitism for a few days right now because of Kanye West despicable tweet that makes the newswe at the MRFF talk about it, think about it and fight it every day, and we will continue to do so until our army ceases to be the bastion of anti-Semitic Christian supremacy that it is now.