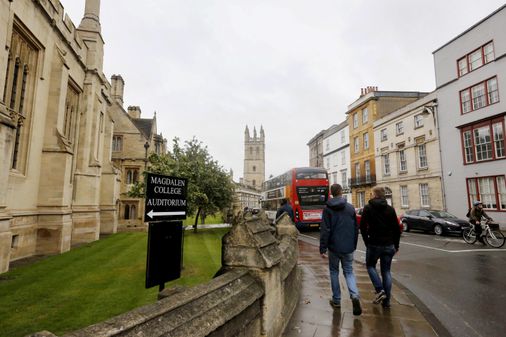 Two Massachusetts students, Tessa KJ Haining and Isaac A. Robinson, are among 32 U.S. students to win the prestigious Rhodes Scholarship for 2023, according to a statement from the U.S. Secretary’s Office of the Rhodes Trust.

Both undergraduate seniors at Harvard College, they will begin their graduate studies at the University of Oxford in England in October 2023, the statement said.

Haining, from Newton, majors in chemistry and comparative literature, according to the release. She is a varsity athlete on the heavyweight rowing team and a violinist and production manager for the Harvard student-run orchestra. As co-director of Harvard’s Food Concerns Outreach and Hotline, she has helped expand the program’s reach on campus and serves as a peer counselor.

At Oxford, Haining will pursue a master’s degree in the history of science, medicine and technology, according to the statement.

Robinson, of Milton, majors in computer science and math, the statement said. He is a college heavyweight rower and co-chair of the Harvard College Democrats.

Robinson created and served as Director of Diversity, Inclusion and Ethical Technology at the Technology for Social Good group. He has also conducted research and completed internships at the National Institutes of Health, Jane Street Capital, Meta and the BGI Group.

At Oxford, Robinson will pursue a master’s degree in advanced computing, according to the statement.

“They inspire us already with their accomplishments, but even more so with their values-based leadership and selfless ambitions to better their communities and the world,” said Elliot F. Gerson, U.S. Secretary of the Rhodes Trust, describing the class of this year in the press release. .

Rhodes scholarships cover all expenses for two to three years of study at Oxford University, extending up to four years for students in certain departments, according to the statement. They support students who are committed to making a positive impact in the world.

“A Rhodes Scholar should show great promise of leadership,” Gerson said in the statement. “We are looking for young people of exceptional intellect, character, leadership and commitment to service.”

This year, more than 2,500 students entered the application process. Of these, 235 applicants from 73 different colleges and universities made it to the final stage. In most of the 16 contest districts, committees interviewed 14 or more contestants, selecting two finalists in each district.

The 32 U.S. finalists will be part of an international group of more than 100 students from more than 60 countries, some of whom have attended U.S. colleges and universities but who are not U.S. citizens and applied through their home countries.

The first class of American scholars from Rhodes entered Oxford in 1904, the statement said. Since this year, 3,610 Americans have won Rhodes scholarships, representing 327 colleges and universities.

Women became eligible to apply in 1976, according to the statement. Since this year, 643 American women have won the scholarship.

The Rhodes Scholarship is worth around $75,000 per year, reaching up to around $250,000 depending on the academic field and degree type of the student.

Isabela Rocha can be contacted at [email protected]