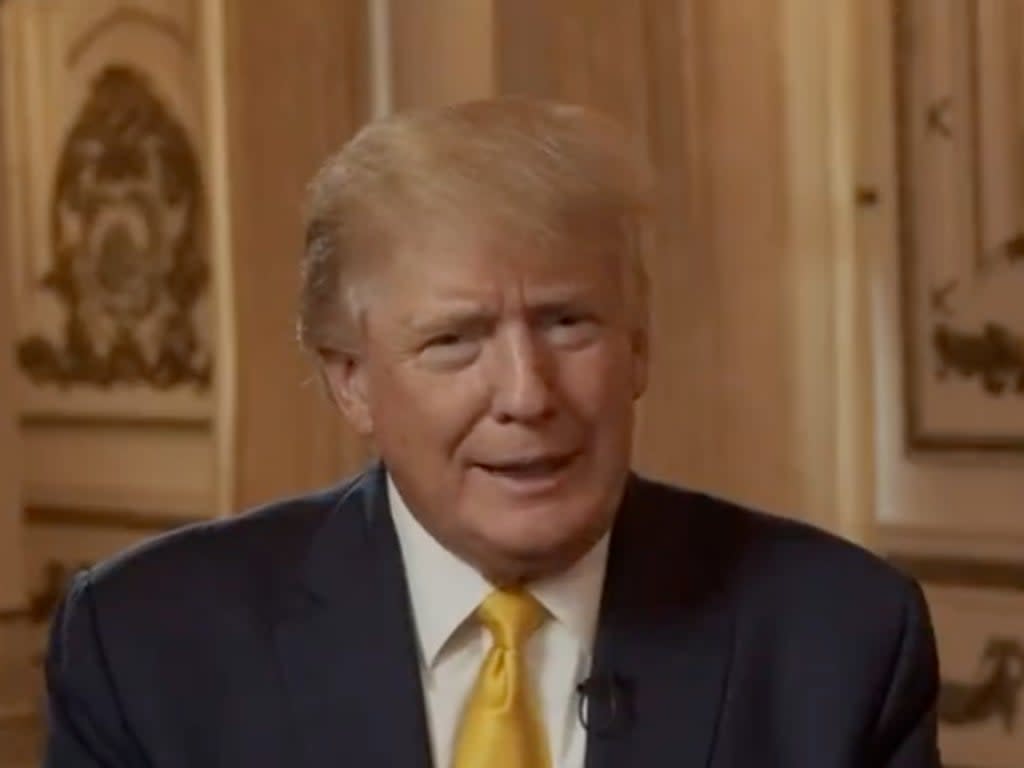 In a bizarre interview between the presenter of Newsmax Mike Huckabee and former president Donald trump, the latter claimed to have brought back by saying “Happy Christmas“and that Jews and Muslims love the holiday as much as Christians.

The interview, which aired on the right-wing Trump-friendly newsmax cable channel Newsmax, centered on Mr. Huckabee praising Mr. Trump for getting people to say “Merry Christmas” again after an alleged period of time when people wouldn’t.

At the start of the clip, Mr. Huckabee says people have stopped saying “Merry Christmas” as a greeting – likely a reference to big business and some people who choose to use “Happy Holidays” as a more inclusive greeting for people who are not or are not religious. not Christian – and then commends Mr. Trump for allegedly convincing people to repeat it.

Mr. Trump agrees that “the country started with this revival” which he says has kept people and businesses from using Christmas greetings.

â€œIt was embarrassing for these stores to say Merry Christmas, you would have these big chains wanting your money but they don’t mean Merry Christmas,â€ Mr. Trump said.

The commentary is the latest iteration of the conservative Christmas cultural wars that crop up every December, typically marked by the hand-twisting of the phrase “Merry Christmas”, the removal of “Christmas Christ” and often including criticism of the mugs. Starbucks coffee.

The former president accepted Mr. Huckabee’s praise and noted that people are apparently saying “Merry Christmas” again, but “they’re not saying anything else, George Washington, Abraham Lincoln, Thomas Jefferson, you know those names are erased because of madness. “

He said he encouraged his supporters not to shop in stores that “don’t say Merry Christmas.”

Mr. Trump then goes on to say that “Americans love Christmas” regardless of their spiritual beliefs.

â€œWhether you are a Muslim, a Christian, a Jew, everyone loves Christmas,â€ he said.

While the enjoyment of the holiday season is obviously left largely to individual preferences, neither Muslims nor Jewish adherents traditionally celebrate Christmas, as it is primarily a Christian holiday co-opted from previous pagan solstice celebrations.

The interview is interspersed with B-roll footage of Christmas trees wearing nationalist ornaments – including one that says “Be Best,” a reference to former First Lady Melania Trump’s anti-bullying campaign – and features music sweet on scenes of white families celebrating the holidays.

Due to the lack of research on the subject, it’s difficult to verify virtually everything either of the two men said during the interview. However, the data suggests that most Americans don’t care.

In 2016, when Mr. Trump was said to have just started rooting out “happy holidays” as a greeting, a Public policy survey found that over 80 percent of Americans didn’t care what wording people use as a holiday greeting.

A Pew Research Poll of 2017 found that more than half of Americans didn’t care about the greetings used by stores during the holidays. According to both polls, the only people who cared were, as you might expect, very strong Conservatives.

Some Christian leaders even support the use of “happy holidays” as it was a more inclusive – and therefore loving – way of greeting others during the holidays.

In a 2016 editorial on the subject, Rev. JC Austin, vice president for Christian Leadership Training at Auburn Seminary, wrote that the phrase was a better way to exercise the values â€‹â€‹the holiday is meant to celebrate.

â€œUsing their own logic, if saying ‘Happy Holidays’ is an intentional cultural shift from Christianity, then stressing ‘Merry Christmas’ is everyone’s intentional shift,â€ he said in The hill. “If ending political correctness means having the freedom to speak out, then it seems strange that its supporters insist on what others have to say.”

This group of Jewish women “barely” speaks of challah – J.