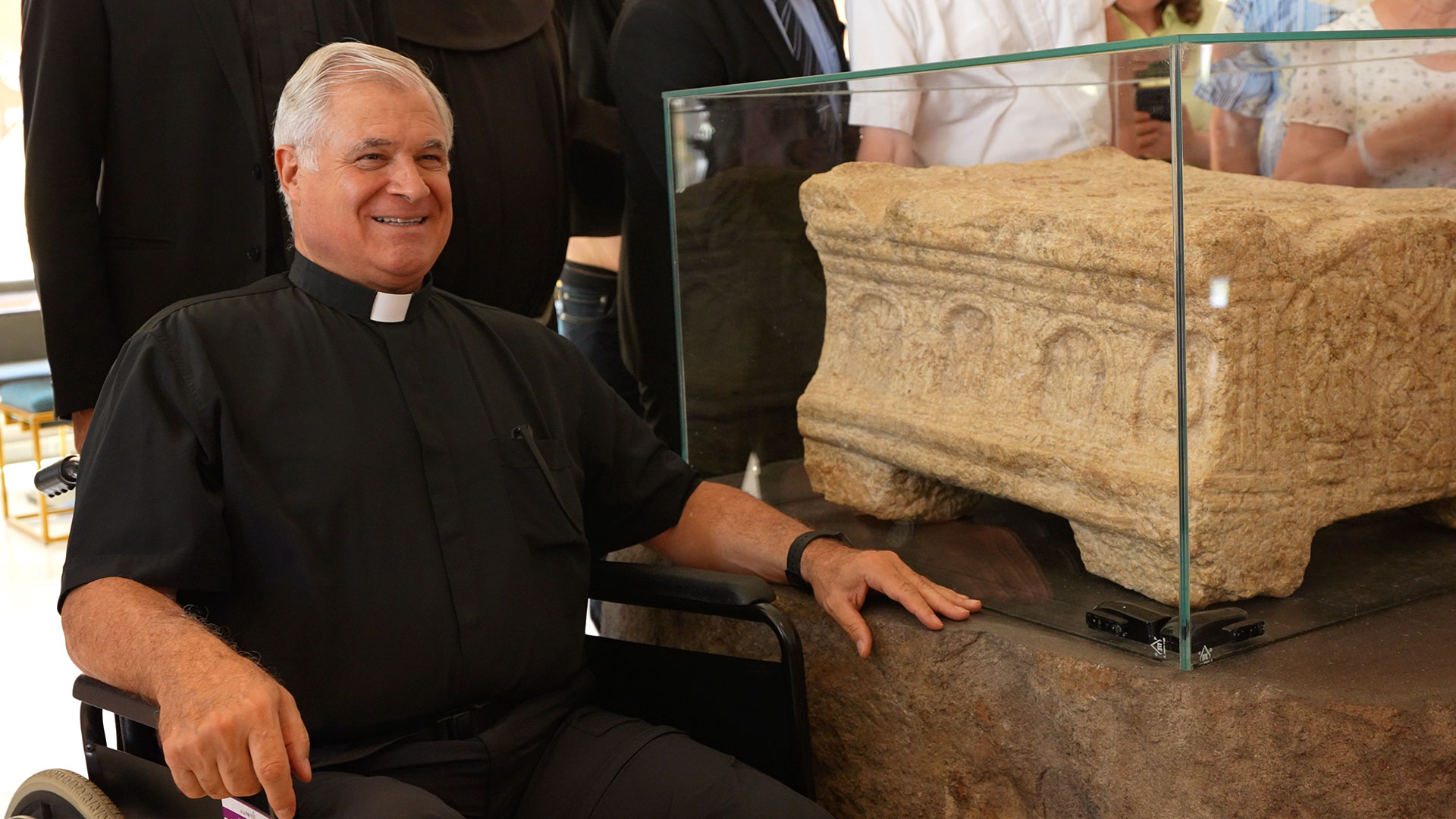 The Stone of Magdala in Israel’s Galilee, an “oasis of encounter” with Christian and Jewish history

JERUSALEM, Israel — A unique stone from an uncovered synagogue where Jesus may have prayed has returned to his home in Galilee, and the Magdala Stone is expected to be a particular draw for visitors.

Considered by experts to be one of Israel’s most important finds, the Magdala Stone spent years with the Israel Antiquities Authority (IAA), then toured internationally with exhibits in New York and in Rome.

“I myself, together with a few other workers here, have put [the stone] in the truck that [removes] from the site. So, I said ‘Bye, see you soon’ to the stone at the beginning of January 2010. So to see the stone coming back today is a great joy,” said Father Juan Solana, director of the Magdala center.

Dozens of people recently gathered at the Magdala Center Hotel for the return of the Magdala Stone.

Just outside the hotel is the site where archaeologists discovered the original stone in 2009. A replica of the stone now stands on the exact spot of the ancient synagogue where it was found.

“The director of [the] Antiquities Authority at the time of discovery, he came, he was looking around,” Father Solana told CBN News. “He said, ‘The Magdala Stone must come back here because this synagogue without the stone is like a decapitated body.'”

Known today as Migdal, Magdala was a city on the Sea of ​​Galilee and known as the home of Mary Magdalene of the New Testament.

In 2005, Father Juan Solana started the Magdala project to highlight the ministry of Jesus in the region and honor women of faith. They paved the way in 2009 and the center now includes an archaeological park, a chapel and a hotel on the shores of the Sea of ​​Galilee.

Father Solana said he realized when he was about to buy the land that the center could not belong to the Catholic Church, but would belong to all Christians, because in as a house of Mary Magdalene, it would be precious.

“But when we discovered the synagogue and the whole city of Magdala from the first century, I said, ‘This does not belong [only] to all Christians, but also to the Jewish people,” he said.

Archaeologist Mordechai Aviam, from the Land of Israel Studies Department at Kinneret College, was one of the first to propose that the Magdala Stone was one of a kind.

“Magdala Stone is a unicum. It is a unique object. He is [an] unknown collection of what I believe to be Jewish symbolism, which [symbolizes] the Temple in Jerusalem,” Aviam told CBN News.

Aviam believes the stone held deep significance for Jewish worshipers who could not make the weeks-long journey to Jerusalem and back. He thinks it was used to hold the Torah scroll (the first five books of the Bible) while it was read.

*** Please sign up for CBN newsletters and download the CBN News app to ensure you continue to receive the latest news from a distinctly Christian perspective. ***

“They looked at the stone, they felt Jerusalem and the Temple and God in their hearts. And that is the meaning of this stone,” Aviam said.

Fr Eamon Kelly, deputy director of the Magdala center says that for him, Magdala is all about the people who come to visit.

“I always hire people who come and really a cross section of humanity comes here. And we see that the archeology here is a crossroads of Jewish and Christian history, but the spirit of Magdala is a crossroads for everyone,” Father Kelly told CBN News.

Father Kelly says he believes the return of the original stone will draw people here like a magnet like never before.

“Magdala is like an oasis of encounter,” he said. “And I think it will give that extra push because people will come, and it will create conversation, dialogue and a search for understanding. And it will be an opening to understand the past and the present. And this is a path for the future.