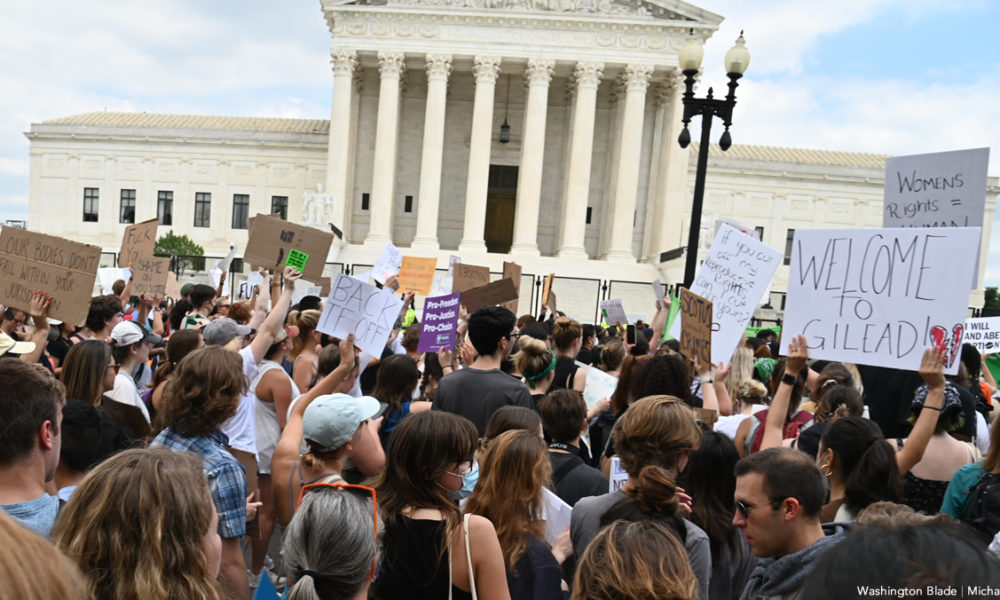 By James Finn | DETROIT – Somewhere in the United States this morning, a young girl is pregnant because she was sexually abused by someone she trusts – a parent, an uncle, a teacher, possibly a Baptist pastor from South. She is terrified, believing it to be her fault. Her mother is doing everything in her power to help her, but her situation is agonizing.

Because they live in Alabama, Arkansas, Florida, Kentucky, Louisiana, Missouri, Oklahoma, Ohio, South Dakota, Tennessee or Texas, her 12-year-old daughter cannot legally terminate her pregnancy – not even as a victim rape or incest. If they are poor, traveling out of state for an abortion will be difficult, if not impossible, especially when abortion is illegal in neighboring states.

In at least two states, this mother could face crippling financial/legal consequences if she took a bus with her daughter out of state for an abortion, and one of her neighbors reported them to authorities.

Welcome to the Republic of Gilead

It’s real. This is happening right now as you read this. For 50 years, women in the United States have enjoyed the constitutional right to terminate their pregnancies before “viability,” the time when a fetus can survive outside the womb. This morning I wake up in a country where a small cabal of religious extremists in the Supreme Court, in Dobbs v Jackson Women’s Health Organization, have knocked down Roe vs. Wadewresting personal freedom from women and girls.

I wake up knowing that these judges are targeting other basic privacy rights like contraception, same-sex marriage, and even the right to have consensual sex with other adults.

How did we get to this dark corner of official religious fanaticism?

Katherine Stewart in The Guardian outlines a decades-long processdetailing “how the Christian right took the judiciary and changed America,” although he represents only a minority of Americans and a minority of legal thinkers.

* If we don’t take the judges at their word on the rest of their extremist agenda, we do so at our peril as free people. *

A super majority of Americans disagree with the High Court, insisting that traditional American liberty MUST include women, insisting that judges got it right 50 years ago when they recognized that the The Constitution implicitly guarantees women the right to make their own reproductive choices based on their own values. and religious beliefs—or lack of religious beliefs.

A super majority of Americans believe that religious Jews, for example, have just as much right to act according to their conscience, based on their religious traditions, as conservative Christians. Traditional Jewish ethics demand abortion in circumstances where the well-being of the mother would be seriously affected by the pregnancy – as with this 12-year-old girl above.

The hardline Christian conservatives on the Supreme Court don’t care.

They just said, indeed, we only care what conservative Christians like us want. Welcome to the Republic of Gilead, where our religious beliefs dictate your lack of freedom.

Justice Clarence Thomas is not shy in his concurring opinion, writing: “We should reconsider all the substantial precedents of due process of this Court, including Griswold, Lawrence and Obergefell.

He talks about rights as “meaningless” as using contraception to avoid pregnancy, having sex in private with a same-sex partner, or marrying a same-sex partner. He says the Constitution does not and should not prohibit the state from interfering in these extraordinarily private parts of American life. Judge Samuel Alito officially agrees with Thomas, although he wrote in yesterday’s majority opinion that Dobbs should not be interpreted to mean the automatic end of other substantive due process rights.

Legal scholars are unimpressed with this disclaimer, especially given Alito’s previous statements expressing his hostility to such rights. They note that Judge Amy Coney Barrett is also hostile to privacy rights. They ask how Dobbs’ reasoning could ultimately fail to eviscerate general privacy rights for all Americans.

Write in the LA blade, leading LGBTQ activists express concern over Dobb’s reasoning, warning that if we do not act decisively, we will lose many of our cherished guarantees of freedom.

human rights campaign Legal Director Sarah Warbelow writes, “We know that if the Court were willing to overturn 50 years of precedent with this case, all of our constitutional rights are at stake. Lawmakers will be even more emboldened to come after our progress.

They are right. We already know that conservative justices want to end civil equality for LGBTQ Americans. They have told us in searing language several times. Yesterday, as judges wrested critical freedom from women and girls, they showed us that even 50 years of entrenched legal precedent would not stop them. If we don’t take the judges at their word on the rest of their extremist agenda, we do so at our peril as free people.

We must protect women and girls

In the short to medium term, working together to help women like this hypothetical 12-year-old rape victim must be a key priority. The governors of California, Washington and Oregon have already announced a joint effort to provide safe haven for women and girls, saying they plan to direct state law enforcement not to cooperate with outside agencies investigating women or abortion providers.

According Atlantic, outraged women are is already organized around activism and shelter networks, committed to making abortion accessible to women and girls who need it.

The federal government has steps announced make medical abortion (using the pill) more accessible, even if it is not a panacea. It is generally illegal for a physician to prescribe medications via telemedicine to a patient in a state where those medications cannot be legally dispensed.

Our number one priority must be Supreme Court reform

President Biden yesterday called for mass voter turnout in November to elect a Congress that will pass abortion protection legislation. He is absolutely right that we need this massive participation, but he does not go far enough.

No federal legislation will stop religious extremists on the Supreme Court from defending state abortion bans. Congress, arguably, doesn’t have the power to tell states how to regulate abortion, and if you think the conservative judges are just going to let that slide, you’re not caring.

As Stewart explains in The Guardian, conservative judges have fringe legal opinions, so don’t expect them to play by conventional rules. Senators Susan Collins and Joe Manchin learned this the hard way yesterday after Judge Brett Kavanaugh broke what they describe as his personal and private commitment not to knock Roe down.

Only Supreme Court reform will save LGBTQ equality

Extremist religious judges are on a rampage right now, tearing down traditional walls of separation between church and state, favoring religious instruction that discriminates against LGBTQ people, even ruling last week that Maine has a affirmative legal obligation fund religious education with taxpayers’ money. The legal experts raised their arms in astonished horror.

None of this is going to go away on its own. Judges are not going to magically see the light and stop eviscerating freedom in favor of fringe religious views.

Yes, we need massive voter turnout in November to elect a Congress ready to save American freedom. No, passing a federal abortion law is not the answer, or at least not the whole answer.

We must enact fundamental judicial reform

We need to increase the number of justices on the Supreme Court and give President Bident the ability to appoint mainstream legal thinkers who will outvote the religious extremists who dominate the court today.

It may be a radical idea, but it is no more radical today than when FDR did the same thing in 1937 in the face of a justice system relentlessly opposed to his efforts to save the United States from the Great Depression – implacably opposed to the will of the American people and mainstream legal thought.

The only thing more drastic than taming the court would be not taming it, allowing the Republic of Gilead to emerge from the pages of dystopian fiction into a cruel reality.

You doubt me ? Go talk to this 12-year-old rape victim and her mother who can’t seem to find a way to save her daughter.

In the meantime, act, organize yourself, vote. Our most cherished American freedoms depend on massive turnout in November.

Get out there and make it happen!

James Finn is a columnist for LA Blade, a former Air Force intelligence analyst, alumnus of Queer Nation and Act Up NY, and an unpublished “agent” novelist. Send questions, comments and story ideas to [email protected]

The previous article has already been published by Prism & Pen – Amplifying LGBTQ voices through the art of storytelling and is republished with permission.