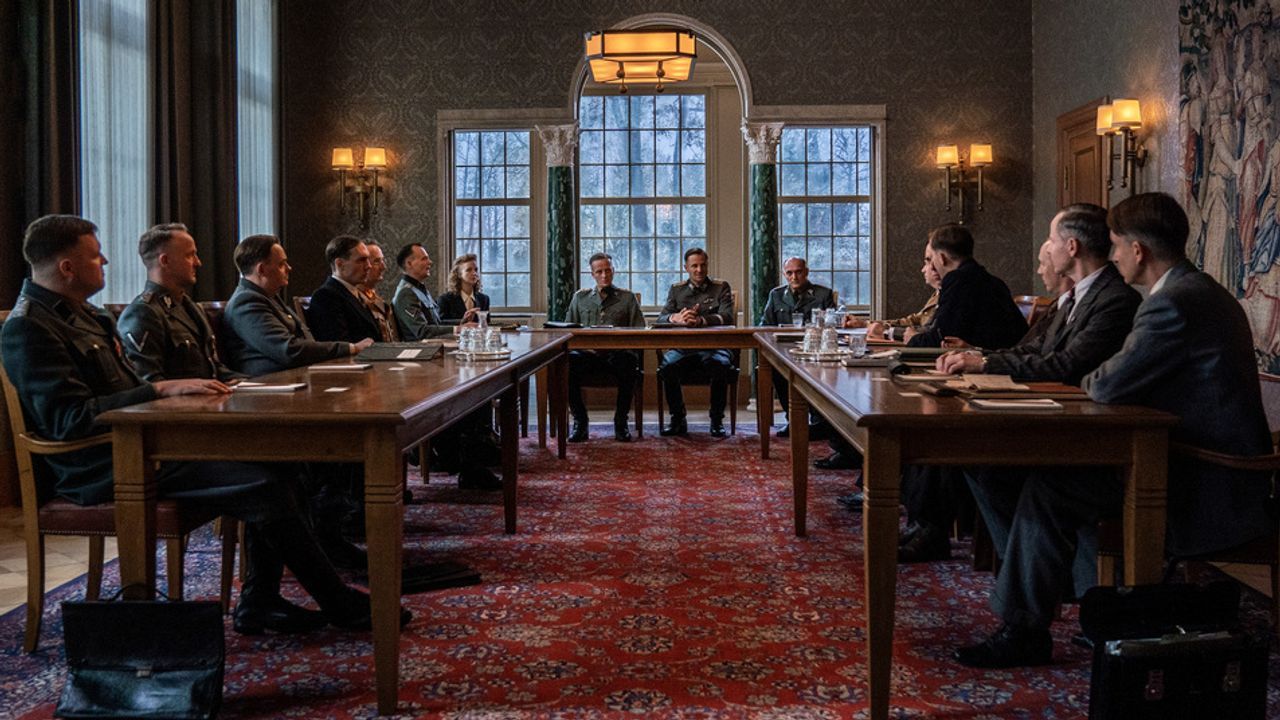 The Conference: A haunting and disturbingly topical film about the Nazis’ “Final Solution to the Jewish Question”

To mark the 80th anniversary of the infamous Wannsee Conference of January 20, 1942, in which leading Nazis and ministers planned the extermination of Europe’s Jewish population, The conference aired on German television channel ZDF on January 24. The film, directed by Matti Geschonneck, can also be viewed online in German.

Geschonneck’s film, shot on location, focuses almost exclusively on the 90-minute encounter at the Villa am Wannsee near Berlin. Here, on a Saturday morning, leading figures of the Nazi regime gathered at the invitation of Reinhard Heydrich (Philipp Hochmair), the head of the Reich Security Office (RSHA) of the SS for a “discussion followed by a small- breakfast”. The meeting had one item on the agenda: “The final solution of the Jewish question.” Heydrich had been assigned to play the lead role in the “Final Solution”. Besides Heydrich, the participants were:

In the opening sequence of the film, we see the last minutes of the preparations for the meeting. Various documents, including a list totaling 11 million Jews in Europe compiled by Eichmann, are laid out on the table for each attendee. Salmon canapes, cognac and coffee are offered for refreshment.

Heydrich conducts preliminary talks with Martin Luther, the Undersecretary of State at the Ministry of Foreign Affairs, followed by Rudolf Lange, Schöngarth and the head of the Gestapo Müller. Heydrich meanwhile asks Eichmann “to go and entertain these gentlemen with some stories from the Orient.”

Besides Eichmann and Müller, it was Luther of the Foreign Office who was best informed of the RSHA’s plans and preparations for the extermination of the Jews. Before the meeting began, Luther assured Heydrich “full access” to Jews of “all nationalities” in Europe. “The time for restraint is over.”

In Heydrich’s office overlooking the lake, Schöngarth and Lange report from the Eastern Front, where the Nazis shot hundreds of thousands of Jews in mass graves in the months following the invasion of the Soviet Union on June 22, 1941. Lange declares that “Estonia is free of Jews” [judenfrei]. Latvia and Lithuania were also ‘free of Jews’, except for working Jews. [Arbeitsjuden].

By the time of the Wannsee Conference, the Nazis, with the help of local fascist collaborators, had already murdered 537,000 Soviet Jews. Heydrich informs his SS colleagues that the Secretaries of State are less severe than the SS. But: “The gentlemen must know what they are about to participate in, it helps to close ranks.” It was only a “question of dosage”.

The meeting itself revolves primarily around two issues: First, Heydrich wants to ensure that all state authorities involved agree with the plans for industrialized mass murder and acknowledge the primary role played by his authority – the Bureau of Reich security. Chillingly, the film presents a grim display of bickering between secretaries of state who feel their ministerial powers are under threat. Bühler’s main concern is that the two million Jews in the General Governorate of the occupied Polish region will be the first to be deported and murdered.

What exactly should happen to the Jews is not clearly stated at any time. This too is historically correct. The minutes of the Wannsee Conference refer only to the “evacuation” of the Jews “to the East”. The other, even more disturbing term used repeatedly by conference attendees to refer to mass murder is “working away”. [wegarbeiten] Jews.

The second and by far the longest part of the session dealt with the so-called “Mischlingsfrage”. Under the Nuremberg Race Laws introduced in 1935, a person could be classified as “half-Jewish” or “quarter-Jewish” if, for example, a German citizen had a Jewish parent or a Jewish grandparent. Stuckart helped draft these laws and insists at the meeting that such “Mischlinge” [derogatory for people of supposedly “mixed race”] be exempted from deportations, proposing instead their mass forced sterilization.

Like several other Secretaries of State, Stuckart feared above all that the mass deportation of Jews from the German Reich would cause “trouble”, “irritation and investigation” among the population. At one point, Stuckart said the mass deportations of those approximately 70,000 citizens could lead to “chaos, and chaos breeds resistance.”

No one at the conference expresses a fundamental objection to mass murder. Erich Neumann, State Secretary in Göring’s Office for the Four-Year Plan, repeatedly stresses that skilled Jewish workers in Germany must be exempt from deportations so as not to endanger the economy. Nor should Jewish labor in the Orient simply be wasted. Heydrich reassured him: the criterion of “Jews able to work” and “Jews not able to work” would henceforth play a more important role. Jews “able to work” would be exploited to advance the war economy before they too were “added to the Final Solution.”

At another point, the Secretaries of State express concern that the mass transport of Jews in the midst of the war could jeopardize the war effort. Heydrich replies, “War is not an obstacle but an opportunity,” because it is now possible to do and achieve things that would be impossible in times of peace.

Secretary of State Kritzinger is somewhat troubled by reports from the East and discusses the effects of mass shooting on the morale of “our German soldiers”. Towards the end of the meeting, he calculates that, based on the shooting of more than 33,000 Jews in the Babi Yar ravine near Kiev, carried out “under ideal conditions” in three days, the mass “at work” of the 11 million European Jews would take more than 450 days without a break.

Heydrich is likeable. Even Heinrich Himmler acknowledged that he was affected when he witnessed such mass shootings and immediately called for “more humane” methods of mass murder, i.e. “more humane” for the mass murderers. Since then, Heydrich continues, new methods have been developed based on the “findings” of the Nazi T4 euthanasia program, which used gas to murder 70,000 physically and mentally ill people.

At Auschwitz, Heydrich continues, Rudolf Höss conducted “promising experiments” with Zyklon B on Russian prisoners of war, and one could assume that in the near future thousands of people a day could be “worked” in the only Auschwitz concentration camp. Reassured, Kritzinger leaves the villa at the end of the conference and rushes to the next meeting, where the “restructuring of the post office” is on the agenda.

The only participants in the Wannsee conference to face reprisals for their crimes were Bühler, Schöngarth and Eichmann, who was sentenced to death in Israel in 1961 and executed in 1962 after continuing for several years after the war to cultivate a Nazi environment. in exile in Argentina. Several of the participants in the Wannsee meeting were in fact able to pursue their careers undisturbed in the post-war Federal Republic, including Georg Leibbrandt, who became an adviser to the Adenauer government.

Screenwriters Magnus Vattrodt and Paul Mommertz wrote the script for The conference based on the only surviving transcript—all other copies were destroyed because the meeting never officially took place—as well as extensive historical research.

The film dispenses with music and relies entirely on a moving camera to chart the interaction of an exceptional cast of players. Director Matti Geschonneck is the son of famous East German actor Erwin Geschonneck, who survived several concentration camps. Geschonneck reportedly told his actors not to play Nazis and told Deutschlandfunk that the film should convey the “character of a board meeting”.

It is precisely this approach and this atmosphere that make the film so disturbing and so topical: not only does Geschonneck show the “banality” of the crimes of fascism – at least from the point of view of the Nazis. In doing so, it also conveys, consciously or not, an impression of the milieu and climate which must prevail today at the highest levels of government, corporations and banks, where the fate of millions, for example through mass death due to COVID-19, or a war in Ukraine are discussed “as an opportunity” in a totally cold manner.

In a discreet way, and therefore all the more terrifying, The conference shows what it looks like and leads to when the ruling class and the forces of political reaction dominate and determine political events. For that reason alone, it deserves a wide audience.

A beautiful document of a father’s last days