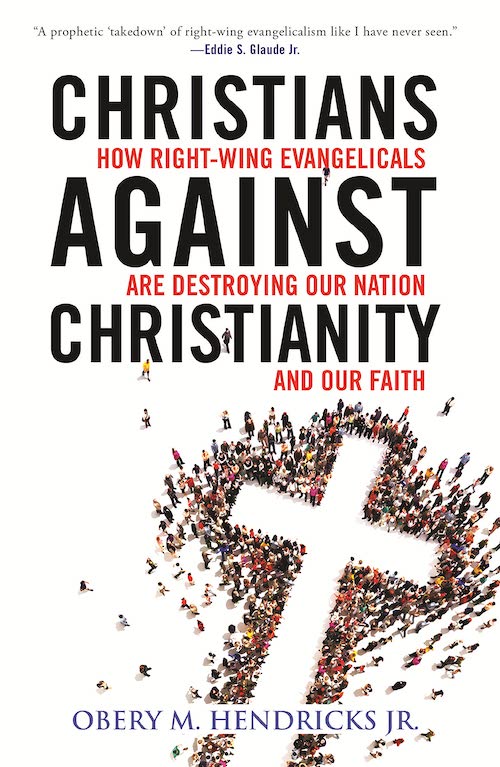 The arbiter of authentic Christianity

HOW CAN CHRISTIANS support the party of Donald Trump – a man who has bragged about sexually assaulting women, uses the Bible as an obvious prop as he gauzes protesters and lies almost as often as he does breathe? For many progressive Christians, the answer is obvious: Trump-era white evangelical conservatives profane the true faith.

This is the argument of the recent book by Bible scholar and Columbia University professor Obery M. Hendricks, Christians vs. Christianity: How Right-Wing Evangelicals Are Destroying Our Nation and Our Faith. Hendricks provides careful textual and historical evidence to show that the Christian view of God is not aligned with Trump, the Republican Party, or conservative evangelicals.

His passion is powerful and his scholarship is compelling. But to non-Christians, his repeated insistence that there is a “genuine Christianity” beyond reproach for such misinterpretations can sometimes sound like wishful thinking. Worse still, the rhetorical evocation of pure Christianity plays on white evangelical Christian nationalism in a way that Hendricks never quite manages to tackle.

Whatever caveats one may have, there is no doubt that Hendricks’ version of Christianity, rooted in the black church, is admirable and compelling. “[T]he central message of Jesus is love,” he wrote. He argues that the central biblical passages for all Christians should be: “You shall love your neighbor as yourself” and “just as you did to one of the least of them who are members of my family. , you did it to me. ”

Jesus unquestionably preached an ethic of social justice and care for the marginalized and oppressed. White evangelical Christians, by contrast, have come to embrace an ethic of supremacy, domination, nationalism, and cruelty.

The religion of evangelical Christians has not always been so grouchy and vindictive. Hendricks points to the participation of white evangelicals in anti-slavery and feminist movements in the late 1800s. But there was a turning point in the late 1970s, driven by desegregation. Evangelicals were mobilized when Jimmy Carter decided to deny tax-exempt status to separate religious schools. Christian institutional self-interest merged with a racist agenda to lay the foundation for today’s Republican Party, fueled by a rabid white evangelical faction.

Hendricks reviews the items in this agenda to demonstrate that they are not in accordance with the general principles of Christ nor the specific word of doctrine. Some of Hendricks’ arguments are compelling. As he says, “Showing hospitality to immigrants is […] an unfailing commandment” in the Old and New Testaments; Passage after passage, Christians are enjoined to welcome strangers. There is virtually no way to reconcile white evangelical Christians’ hatred of immigrants with the biblical text, which is probably why, as Hendricks points out, evangelicals noted this writing had no impact on their views on immigration in a 2015 poll.

Likewise, Hendricks shows that the evangelical Christian obsession with abortion has little or no grounding in Scripture. In fact, he quotes an oft-ignored passage from the Old Testament (Numbers 5:11-31) where the Bible actually commands a husband to abort an unfaithful wife. In the New Testament, abortion is barely mentioned, and Hendricks says there is “certainly no such thing as a consensus about when a zygote or a fetus gains a soul.”

On other issues, however, it is not so clear that the Bible is on Hendricks’ side. On LGBTQ issues, for example, Hendricks argues that in biblical times there was no real concept of sexual orientation. Accordingly, biblical proscriptions are against certain acts rather than certain identities. Hendricks is right – but nonetheless, whether the emphasis is on acts or identities, it is difficult to circumvent the prohibition in Leviticus: “If a man lies with a man as with a woman […] they will be put to death. Hendricks goes on to say that it is possible to interpret scripture in different ways on homosexuality, but argues that in light of Jesus’ central emphasis on love, the ambiguity should be resolved in favor of tolerance and acceptance.

I certainly agree with Hendricks here that Christians, and everyone else, should support LGBTQ people. But since I’m not a Christian, Hendricks’ efforts to align Scripture with common decency are beginning to feel forced and unnecessary. Maybe sometimes the Bible is wrong.

Hendricks wants the Bible on his side in part because he’s trying to convince other Christians that bigotry and cruelty are the way of what he calls the Antichrist, and that as believers they must choose. another way. It follows the long tradition of black Christians like Frederick Douglass or Martin Luther King Jr. who issued prophetic rebukes to their racist white co-religionists in the name of a Christian God they were meant to share. Christianity provides a common basis for discussion and perhaps conversion. Some white evangelical Christians, says Hendricks, “are sincere about their faith but have been terribly misled in its application.”

Hendricks does not fear this past. “It is true that throughout history much suffering, oppression, exploitation and unspeakable horrors have been committed in the name of Jesus Christ,” he acknowledges. But he insists that all these horrors were perpetrated in spite of Christ, not because of him. “[N]No justification or sanction for such abominations can be found in the words or actions of Jesus in the four gospels. Evil Christians have turned against Christianity. Individuals go astray, but speech remains pure. Christianity cannot fail; it can only fail.

Christianity (like Judaism or atheism) is a centuries-old tradition that includes millions of interpretations of its texts and millions of other actions by Christian governments and individuals. As ex-evangelical writer Chrissy Stroop said, “From an empirical and external point of view –– a point of view informed by fields such as history, anthropology, sociology, cultural studies, etc. –– we must accept that there is a great variety of Christian communities with competing theological claims.” There is no absolute court to appeal to to decide which of these communities and claims are evangelical. Thus, Stroop concludes, “we must accept these varied groups as Christians, as representing varieties of Christianity”.

I am convinced that Hendricks’ Christianity of love and justice is a legitimate variety of Christian witness. But I am also persuaded by Yale sociologist Philip Gorski when he reports that white evangelicals love Trump not despite his crudity, but precisely because his “racialized, apocalyptic, gory rhetoric” spoke to their own understanding of their faith. Nationalists and Christian supremacists who love Trump love him because they recognize his xenophobia, hatred and bigotry. Their faith is hate.

Hendricks sidesteps many of the worst implications here as he discusses evangelical Islamophobia. He refers to John 10:16, “I have other sheep which do not belong to this fold.” Hendricks suggests that Jesus said that some of those who serve him are unbelievers. The passage, he says, could refer to “anyone who would accept the ethical demands of its message and strive to live with love and justice, regardless of background or religion.”

I appreciate that Hendricks wants to include Muslims (and me) in the fold, and maybe that’s as far as a Christian witness can go and stay a Christian. But people who have been persecuted by Christians will not necessarily want to think of themselves as belonging to Jesus.

If Christianity ever wants to shake off the current disgrace of white evangelical conservatives, it may paradoxically have to admit that Donald Trump is, in fact, an ugly version of what Christianity is or can be. Hendricks calls for Christianity to triumph over small-hearted Christians, but from a non-believer’s perspective, the real battle is not between individuals and true religion. It’s between a wide range of Christians and a wide range of “Christianities”. May Hendricks and his best faith win.

Noah Berlatsky is a Chicago-based freelance writer. He is the author of Wonder Woman: Bondage and Feminism in the Marston/Peter Comics, 1941-1948from Rutgers University Press.

The BroadsheetDAILY – 2/14/22 – Shortly after residents protest against the planned new homeless shelter in Chinatown, an Asian resident is murdered nearby