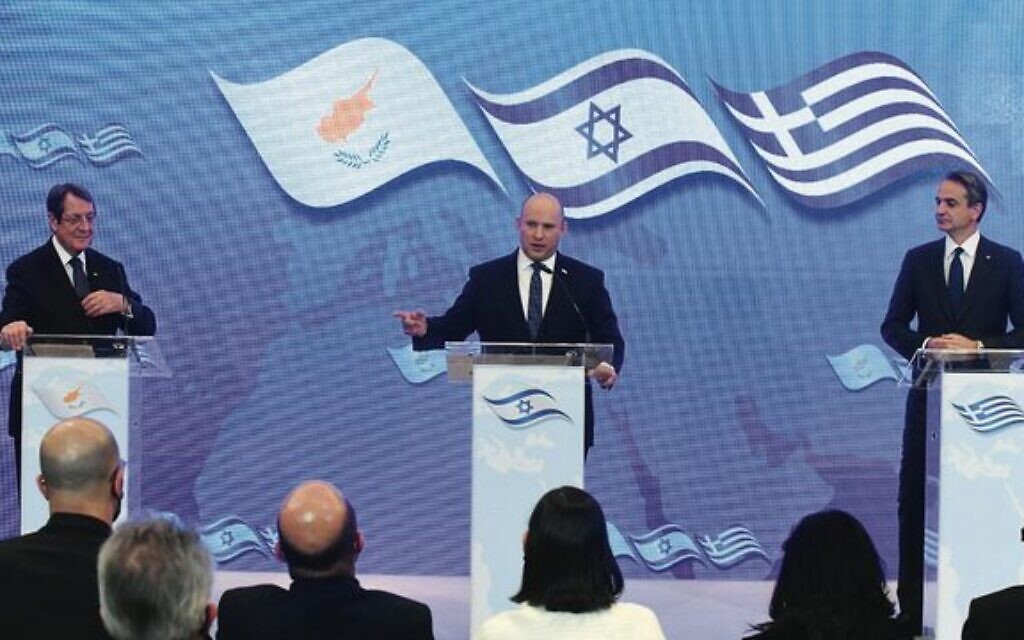 Syria and Turkey on the agenda of Israel, Greece and Cyprus – The Australian Jewish News

Hours after Syrian media accused Israel of hitting the port city of Latakia, Israeli Prime Minister Naftali Bennett said on Tuesday that the military was constantly fighting “evil forces” in the Middle East.

“We push back the forces of evil in this region day and night,” he said in English alongside Greek Prime Minister Kyriakos Mitsotakis and Cypriot President Nicos Anastasiades.

“We won’t stop for a second. It happens almost daily. In the face of destructive forces, we will continue to act, we will persevere and we will not tire out, ”Bennett promised.

“We are strengthening our ties in the areas of security, economy, technology, tourism and emergency services,” he said, referring to the mutual assistance provided during the been faced with forest fires in all three countries.

While Bennett did not mention Turkey, a regional rival to the three countries, Anastasiades referred to Ankara in his speech, calling it a country which “actively sabotages any effort at regional understanding”.

He accused Turkey of “practicing a revisionist policy in which force is just” and of violating the exclusive economic zone of Cyprus in the Mediterranean.

Anastasiades said he would brief his counterparts on the continuing tensions with Turkey in Cyprus. Turkey is the only country to recognize the breakaway republic of Northern Cyprus in the northern part of the island.

In his statement Mitsotakis also attacked Turkey for “unacceptable provocations regarding … this change of Turkish approach to solving the Cyprus problem”.

“The only viable solution to the Cyprus problem is one which fully respects all decisions taken by the Security Council,” he said, asserting that third parties like Turkey did not have the right to intervene in affairs. Cypriots.

“Unfortunately, what we are seeing from Turkey is continued intransigence and unacceptable aggression, both on land and in the maritime areas of Cyprus,” he continued.

The three countries held a naval exercise earlier this year, a sign of the deepening of their military ties.

In August, Israeli Foreign Minister Yair Lapid welcomed his Greek and Cypriot allies to Jerusalem, speaking about his vision for a future regional alliance comprising the United Arab Emirates, Bahrain, Jordan, Egypt, Cyprus, Greece and others as “a key element of change. happening in the area. A moderate, pragmatic and forward-looking alliance ”.