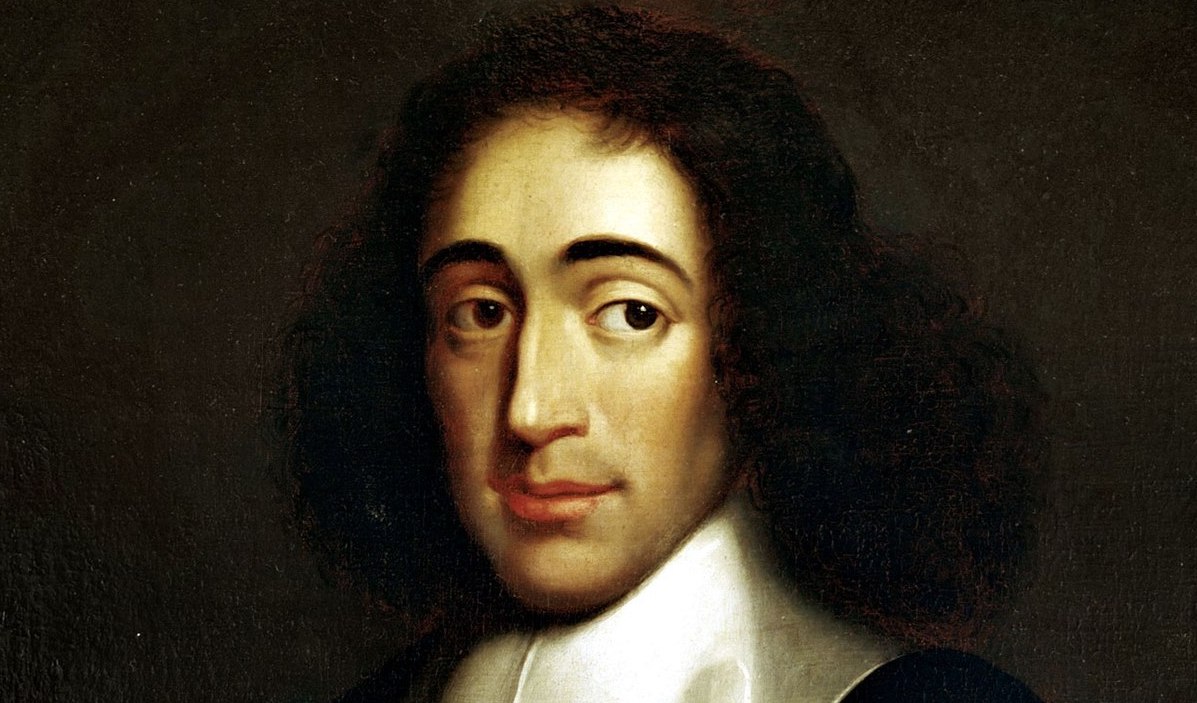 Baruch Spinoza (1632-1677) was a philosopher of the Dutch Golden Age when advances in mathematics and science developed and flourished. Spinoza’s tumultuous rise as a philosopher came after a long battle with his traditional Jewish faith – having been brought up and harshly excommunicated by the Sephardic community in Amsterdam. Spinoza’s excommunication came in response to his Theological-Political Tractatus (Theological-political treatise), one of the earliest significant examples of written and widely published biblical criticism in the West. And although this earned Spinoza a reputation for heresy and atheism, Spinoza believed he was far from either. Rather, his view was that the system of philosophy and theology he had created – only through his reasoning faculties – could make humanity more rational, moral, and happy if followed.

Much of Spinoza’s intellectual journey began with how most of us stay long enough – and for some it lasts until death, which is an existentially terrifying thought. In his first book, Tractatus of Intellectus Emendatione (Treaty on improving understanding), almost autobiographically, Spinoza communicates the existential realization that much of what our ordinary waking life represents is entirely unnecessary and that the things most of us desire are futile to pursue. After all, in the end, what is really is the goal of the momentary pursuit of pleasure, honors and riches, other than to satisfy one’s vanity? Basically, these things don’t really matter, and when they do inevitably disappear, our pleasure too.

More importantly, another realization he expressed is that human beings are not entirely in the driver’s seat of their decision-making abilities. We often have consciously let’s act against our best interest, or as Spinoza says, we often see the good but still choose the bad. This is because our emotions control us far more than we control them, and these are usually not the kind of emotions that we would otherwise want to guide us. Consider, for example, how things go when you act on whatever your hate, anxiety, or blind dopamine systems are telling you. We are very often – perhaps, principally – under the influence of our passions and our actions, not because we thought about it, but because we “wanted to”. As a result, the results of our decisions are substandard – even by our own standards! – which often accumulate in an inferior life. Each of us has, idiosyncratically, a role model way of being and acting, and such substandard decisions prevent us from acting according to our best selves.

Obviously, each of us has the ability to envision a life we ​​would like to have – a life that is respectable and fulfilling for us and precious for others as well. These are not material or practical desires but spiritual desires. Yet most of us, for the most part, fail to achieve this ideal. Existentially and empirically, these are real statements about what it is and means be a human. If so, what should we do about it? Is there really all another question worth asking? Of course not! One can nevertheless consult Spinoza for his masterpiece entitled Ethics, which largely attempts to resolve this existential dilemma.

Certainly we have all seen the antithesis of Spinoza’s average human being. There are undoubtedly rational actors who act according to their own interests and those of others. And in doing so, they lead happy and healthy lives. What separates such a person from others? Are they naturally like this? Or have they developed skills that most of us just haven’t heard of?

Spinoza believed that responsible and cheerful sages, who act according to spontaneous reason, exist, but he also believed that the population of these sages was negligible. As for us, we have to cultivate something, but what and how?

“To be a philosopher is not only to have subtle thoughts, nor even to found a school, but to love wisdom to the point of living according to its precepts,” said Henry David Thoreau. But what does it mean to love wisdom rather than live by its precepts? And how do you go about following Thoreau’s philosophical path? Why do we, as a species, have such a strong propensity towards actions, beliefs and passions like jealousy, resentment, ingratitude, chauvinism, wickedness and hatred? And why is it so difficult for us to free ourselves from these all too human tendencies?

What Spinoza says is the root of our problem

Spinoza thinks the main problem is the lack of understanding. Our “slavery”, as Spinoza calls it, is fundamentally the result of significant ignorance about the nature of reality. And because of this ignorance, we become vulnerable to external causes that negatively affect our psychology. What about the reality we ignore that is holding us back? Several things.

For example, Spinoza believes that reality is determinist – a notion that could be corroborated by modern physics – and therefore free will is an illusion. We readily believe that there is an intentional order in existence – whether it is God’s plan or Marxist dialectic, we are generally convinced that there are calculated and considered reasons for all phenomena. Instead, Spinoza asks us to understand that we, and everything in between, are the product of an endless chain of causes. We hear contemporary versions of this scientifically, for example: After the Big Bang stars appeared, which eventually led to the planets and biological life. All of this did not happen because someone or something wanted or wanted it, but rather, it did because of the very necessity of the laws of nature. We are not in the grip of our emotions because we are bad people; rather, it is the result of natural chance. But, more often than not, we don’t realize this and live our lives believing that we are bad people, which is not true. Replacing such falsehoods with their antithetical truths is what Spinoza believes to be the solution to our initial existential dilemma.

We have to accept the fact that there are external causes – like biology, culture, and socio-economic factors – which are far more powerful than us and which limit our power to act and think as we would otherwise wish. And all of this works in conjunction with our general inability to regulate our emotions, forcing us to live second-rate lives. Basically, realizing this is the first step in solving our slavery.

Liberation by embracing the truth of reality

According to Spinoza, when a true idea replaces a false one, our involvement in thought and action increases. So realizing the truth of reality – which our emotions and externalities primarily control us – will kindle a fire under the belly to take more steps towards liberation.

The next is self-love. And Spinoza’s definition of self-esteem is quite straightforward: it causes feelings of joy in oneself by recognizing itself – and not an emotion or an externality – as the cause of an action or a thought. How do we know we were such a cause? We acted and thought, but we did it in a way that brought us closer to our ideal and idiosyncratic way of being. The idea here is that the more you act in this way, the more capable you will become of self-esteem.

Such self-esteem significantly involves self-preservation – taking care of your own needs before looking after someone else. And these “needs” are not the same as your “wants”. Rather, it means taking genuine care of yourself by absorbing yourself in what interests you and urging yourself to cultivate and maintain your physical and mental health. Striving to strengthen the strongest and most meaningful aspects of yourself is what Spinoza calls “virtue.” To act in your own rational interest – to become the best person you can be, rather than a dogmatic libertarian – is a Spinozist virtue. “Bliss” is the satisfaction of the spirit that derives from virtue.

But, bliss is not the end of the story. What will we do with the others? Living in isolation is not an option. We are, for better or for worse, glued to each other. Spinoza believes that we cannot help but want the same for others once we have achieved virtue. It’s not the same as saying, “Look at me. I’m a writer and I’m in good shape, so you should be too. It would make no sense if everyone’s tangible ends were unified; not only would that be impractical, but it would require force, which is antithetical to virtue itself.

Instead, we should want the good for others we have achieved through our understanding: namely, the ability to act and think in a way that facilitates the creation of our distinctive ideal. The point is this this differs for everyone. If everyone came to virtue in this way, we would all become more useful to each other. If, for example, everyone worked in the profession that best matches their skills, needs and interests, we would have a much more cooperative and skilled workforce. Not to mention that more of us would experience “bliss”, allowing for a more peaceful and joyful cohabitation between individuals.

Modern Neuroscience and Psychology justify Spinoza’s beliefs about ethics, knowledge and human psychology. We are above all self-referential and absorbed in uncontrolled and unconscious emotions. And, through the pursuit of meaning, character development, self-determination and self-preservation, we can overcome our natural inclinations, resulting in a much more wisely lived and fulfilled life.

“If the path that I have shown to lead to these things now seems very difficult, it can be found. And of course, what is so seldom found must be difficult. For if salvation was at hand and could be found without much effort, how could almost everyone neglect it? But all great things are as difficult as they are rare.

Most of us – let alone many – are unlikely to achieve the Spinozist ideal. But it’s hard to argue against its desirability. Perhaps we should pursue it despite its improbable accomplishment.