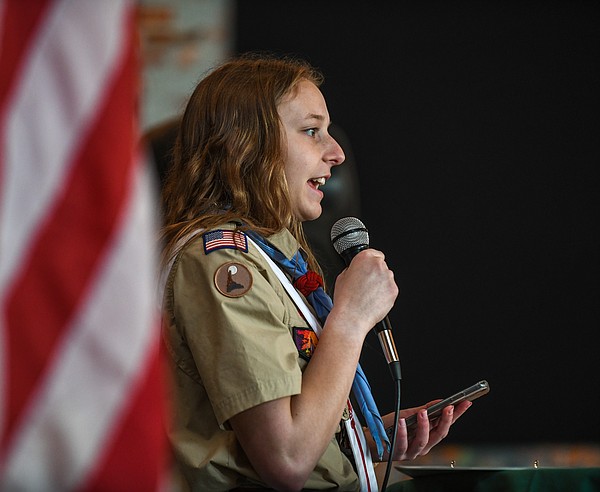 Josephine “Josie” Hall, a high school student from Capital City, was awarded the rank of Eagle Scout in February.

Many community leaders were able to meet and greet Hall at the BSA Scouts annual breakfast and fundraiser on Wednesday morning at the Millbottom.

Now known as BSA Scouts, Boy Scouts of America announced plans in 2017 to allow girls to participate in the program. The first of the girls began to achieve rank over the next three years, and the organization chose to commemorate the entire first class of approximately 1,000 Girl Scouts on February 8, 2021.

“It’s a great organization for me to meet people, meet new friends,” Hall said. “I can do things that I love. I love camping. I love hiking.”

Hall said she developed wilderness skills and leadership skills, and learned time management. Becoming an Eagle Scout requires a person to earn 21 merit badges. Many have time requirements, she says. It takes about three months to complete the requirements for multiple badges.

She attended the Philmont Scout Ranch in Cimarron, New Mexico.

“We went hiking for 12 days in the mountains,” she said.

Of the adults surveyed, all former Boy Scouts, nine in 10 said they were proud to live in the United States.

“Nine out of 10. Ninety percent. I don’t know where else you would poll like that today, to get that kind of rating,” Olson said. “Here you probably would.”

The study also showed that respondents believed voting in every election was essential to good citizenship, Olson said.

“The one big takeaway is that Scouts are more likely to make ethical decisions, rather than easy decisions,” he said.

When he was young, Olson says, his scout leader gave him the book “As a Man Thinketh” by James Allen. Allen took the title from a verse in the Book of Proverbs in the Bible – “As a man thinks in his heart, so is he.”

Allen described his book, published in 1903, as dealing with the power of thought, specifically the use and application of thought to happy and beautiful problems.

By patiently and intelligently working through his thoughts, a man could transform his situation, Allen wrote.

“It’s a very impactful piece of literature for me,” Olson told listeners. “Rarely a week goes by that I don’t refer to it. Thirty-five years ago, my scout leader gave me an object that is a pillar, a reference of my belief system.”

He gave the book to other scouts.

“One day, I hope they refer to it in the same way,” Olson said. “Leaders, do not underestimate the impact you have on the youth of your Scouting units today.”

The fight to criminalize abortion is a matter of religion, and as a non-Christian it is a violation of mine – The Columbia Chronicle