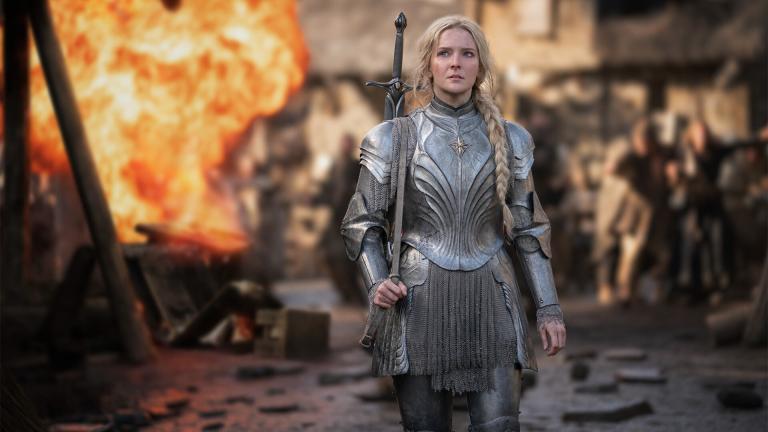 Rings of Power and Loss of Transcendent Virtue

Rings of Power is unquestionably a great TV show. You can see where the huge budget went – the quality of the production. After watching the first two episodes, I was in awe of the visuals. Elvish kingdoms and dwarven mines are captivating. They’re as good as, if not better than, Peter Jackson’s turn-of-the-century masterpiece (my favorite movie of all time). Yet for all the visual splendor that Rings of Power produces, the story so far seems a bit hollow and fabricated for this Tolkien fan. I think it’s because writers are the products of a generation that doesn’t understand the substance and meaning of transcendent virtue.

My theory is bolstered by the initial reviews for The Lord of the Rings: The Rings of Power being mixed. While critics seem generally pleased, Tolkien fans remain cynical. At the time of writing, Rotten Tomatoes featured 84% critical approval but only 39% fan approval; this is a notable disparity. Why? Because, whether they know it or not, the dedicated Tolkien fan yearns for the depth, soul and virtue that only narrative based on the original novels can produce; the bar is set very high.

Recently, I was challenged to compare and contrast the terms “values” and “virtues”. While the task seemed mundane at first, upon reflection I was struck by the contrast of the two words and their interchangeable use today. Admittedly, I’ve been guilty of treating the two as synonyms in many cases. Yet in classical Western philosophical thought (in which Tolkien is said to have been very good), virtue is understood as an alignment of the person’s will and actions with those of the divine. In contrast, values ​​are things a person believes in. The former is vertically aligned and the latter is horizontally focused, a byproduct of our post-modern times.

Why is this important? Because what makes Tolkien’s epic The Lord of the Rings work so well is that the narrative’s thrust is driven by virtue, not personal pragmatism. Subsequently, Jackson’s films did a great job of capturing that. Consider for a moment the virtues that drove the actions of the main characters in Tolkien’s story. Aragorn sought justice, peace and honor. Samwise shows unwavering courage. Frodo shows abnegation, temperance, courage and wisdom. The characters often do the right thing, because it is the right thing as defined by God’s law and the objective moral code. In the face of pure evil, they maintain a deep belief that goodness and providence will prevail over darkness. It’s these virtues (and many more that I haven’t named) that make the novel so influential, timeless, and epic.

I would add that you don’t have to be a Christian to see the beauty of this. Such truths resonate deeply with us because we are humans created in the image of God. I think that’s part of what Paul meant in Romans 1 when he said, “For what can be known about God is clear to them, because God has shown it to them.” For his invisible attributes, namely his eternal power and his divine nature, have been clearly perceived since the creation of the world” (20-21). The story is great because it connects us to the eternal, objective truths of the world God has created. We naturally love heroes.

Jonathan Edwards once wrote in Religious Affections that “true Christian strength consists in strength of spirit, by grace, exercised in two things; in the control and suppression of the evil and unruly passions and affections of the mind; and by firmly and freely exercising and following good affections and dispositions, unhindered by sinful fear or opposition from enemies.” This quote actually reads as if it could be a commentary on Lord of the Rings. That’s how well this story captures biblical and transcendent virtue.

Unfortunately, our modern age has done all it can to undermine divine and transcendent virtues in the name of individual values. For example, how often do we hear children being taught the importance of self-esteem and not self-sacrifice? This reality is tragic on many levels; we have forgotten how to properly evaluate entertainment. Objective truth has taken precedence over feelings, and it is ruining great art and storytelling. When everything is seen through a morally relativistic lens, entertainment becomes little more than a way to satisfy our penchant for lack of critical thinking. Virtuous and well-written stories challenge our human condition and lead us to meditate on the beauty of Christ.

That’s why Rings of Power feels so hollow. For all its stunning visuals, it was written by and for a generation struggling to appeal to the transcendence of virtues. The main character, Galadriel, does not seem driven by courage, justice, or wisdom. Instead, she is driven by revenge. She hunts Sauron because her brother was killed by him. Although revenge stories can be entertaining, they are often superficial and self-centered. Ultimately, it’s cheap storytelling with a few fireworks. I hope the writers add substance to her character over time, but so far it seems her motivations are somewhat selfish and one-dimensional.

That said, I remain optimistic that as the series continues, some measure of Transcendent Virtue will develop – perhaps even some wonderful redemptive arcs. There are so many virtues inherent in Middle-earth that even a storyline based on broad outlines, like Rings of Power, should let some beauty shine through. While it will never repeat the moral depths of the original tale, I will watch and hope for more.