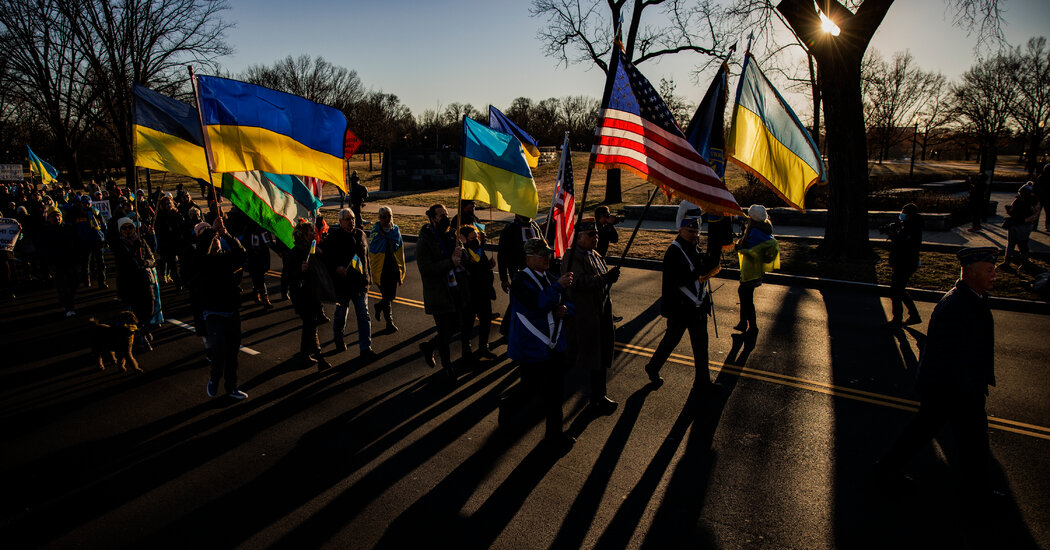 At the center of much of the skepticism about America’s involvement in the Ukraine crisis is the question “Who are we?”

Who are we, with our long history of invasions and interventions, to lecture Vladimir Putin on respect for national sovereignty and international law? Who are we, with our domestic record of slavery and discrimination, our foreign record of supporting friendly dictators, and the continuing injustices of American life, to hold ourselves up as models of freedom and human rights? Who are we, after 198 years of the Monroe Doctrine, to try to prevent Russia from delineating its own sphere of influence? Who are we, with our usual ignorance, to meddle in distant disputes about which we know so little?

Such questions are often asked by people on the left, but there is a strong tendency for the same thinking on the right. When Bill O’Reilly asked Donald Trump in 2017 how he could “respect” Putin when the Russian president is “a killer”, the president replied, “We have a lot of killers. What, you think our country is so innocent?

Trump aside, there’s something inherently virtuous about that kind of thinking: Who’s to say we throw the beam into our own eye first before we throw the straw into someone else’s eye? other ? Countries, like people, are better off when they proceed with more self-awareness, less moral arrogance, greater intellectual humility, and an innate respect for the reality of unintended consequences.

But neither peoples nor countries are well served by the shortcomings of these virtues: self-awareness which becomes a recipe for personal or political paralysis, intellectual humility which leads to moral confusion, fear of unknown risks which becomes an asset to an enemy. These are some of the most profound risks we now face in the fight against the Kremlin.

Why did Putin choose this moment to act on Ukraine? As many have pointed out, Russia is an objectively weak state – “Upper Volta with nuclear weapons”, as someone once joked – with a lower nominal GDP than South Korea. Apart from energy, minerals and second-rate military equipment, it produces almost nothing that foreigners want: no iPhones, Lexus or Russian “Fauda”. Putin’s problem with Ukraine, starting with the 2014 Maidan uprising, is that Ukrainians want nothing to do with him. If he was a Disney character, he would be Rapunzel’s mother.

But Putin has advantages that his opponents do not have, which go beyond the correlation of military forces in the Donbass.

But Putin’s greatest advantage is self-confidence. Serious historians may scoff at his elaborate historical theories about Ukraine’s non-existence as a true state. But he believes in it, or at least he makes a convincing demonstration of it. What does the West really think of Ukraine, except that it would be a shame and scary if Putin swallowed big chunks of it? Certainly nothing worth fighting for.

Most of us understand that history has a way of turning into myth, but the reverse can also be true: myths have a way of making history. Fortune also tends to favor fervent believers.

The United States used to be self-confident. According to several generations of Americans, our civilization represented human progress. Our political ideals – concerning the rule of law, human rights, individual freedoms, democratic governance – were ideals for all peoples, including those beyond our borders. Our literature spoke of the universal human experience; our music with a universal soul. When we waged war, it was for high moral purposes, not for miserly purposes. Even our worst blunders, such as in Vietnam, stemmed from defensible principles. Our sins were real and many, but they were correctable flaws, not systemic characteristics.

It goes without saying that this self-belief – like any belief – was a mixture of truth and vanity, of idealism and pride, of vision and blindness. It has led us to commit all sorts of errors, the keen awareness of which has become the dominant tension in our intellectual life. But it also led us to our great triumphs: Yorktown and Appomattox; the 13th and 19th Amendments; the Berlin Airlift and the fall of the Berlin Wall; the Marshall Plan and PEPFAR.

These victories were not the result of a question: “Who are we?” They arrived asking, “Who else but us?” In the Ukraine crisis, which is really a crisis of the West, one might start asking the second question a little more often than the first.