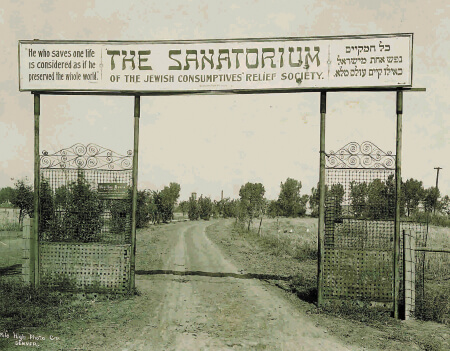 Rabbi Yehuda Leib Ginsburg’s 75th yahrzeit is Tishrei 27. Denver’s most prolific rabbinic author, he is also remembered as a gentle and welcoming personality who, along with his wife, ran an open house.

His works on the Torah, the Prophets, the Mishnah, and the Shabbat – all with a distinct ethical bent – are studied around the world.

RAbbi Yehuda Leib Ginsburg was born in Dvinsk, Latvia, in 1888. Although little is known about his early years, Rabbi Ginsburg was clearly a high-caliber Torah scholar from an early age. He was a pupil of some well-known rabbinical figures of his time, including Rabbi Meir Simcha Hakohen of Dvinsk and Rabbi Chaim Ozer Grodzinski.

Rabbi Ginsburg himself also appoints Rabbi Aryeh Leib Rubin of Wilkomirer as one of his teachers.

Rabbi Ginsburg was dean of yeshiva in the cities of Eishikok, Lithuania and Rezhitsa, Latvia, and later rabbi in Yaroslavl, Russia.

During the Russian Revolution, there were many attempts to move Rabbi Ginsburg to the United States, but they were all unsuccessful.

The family first settled in New Haven, then soon moved to New York.

Shortly after arriving in the United States, Rabbi Ginsburg was diagnosed with tuberculosis.

Treatment was initially attempted at the Hebraic Sanitarium in Browns Mills, New Jersey, but when this proved unsuccessful, Rabbi Ginsburg was transferred to the Jewish Consumptives Relief Society (JCRS) in Denver.

Rabbi Ginsburg’s original intention was to return to New York after his recovery.

Eta Ginsburg and the two Ginsburg children stayed in New York City while Rabbi Ginsburg traveled to Denver for treatment. He arrived at JCRS on February 3, 1932.

BBy April 1932, Rabbi Ginsburg had already decided that he wanted to move his entire family to Denver permanently.

Rabbi Ginsburg’s change of plan is explained in a letter sent by the JCRS to the Jewish Social Service Assn. At New York.

â€œRabbi Ginsburg is very keen to stay in Denver if possible because people here don’t fear the presence of TB patients like they do in the East.

“He tells us that he was welcomed into several homes in Denver, when he felt very sensitive visiting friends in New York.”

It’s nice to hear that the unique hospitality that permeates so many Jewish homes in Denver today was present almost 100 years ago.

Rabbi Ginsburg left the sanatorium on June 30, 1932 to succeed the late Rabbi Isaac A. Braude as rabbi of the Zera Israel congregation (also known as “Litvishe Shul”) west of Denver. He was then joined by his family and spent the rest of his life there.

Rabbi Ginsburg was loved by all. Although he was only paid a small sum by Zera Israel, a fund was established for him and his family while he published several books on Jewish law and traditions.

Orthodox, Conservative and Reform Jews in Denver have been reported to have contributed to the fund, thereby supporting Rabbi Ginsburg in his efforts.

In Pioneers, peddlers and Tzaddikim, Ida Uchill wrote: â€œHer house was one of the friendliest and most hospitable in town. There were always five or six guests who ate with him while his fragile wife served them.

“His genius didn’t stop him from being one of the most easily accessible men in the community, and his pleasant spirit put everyone at ease with him.”

He also played an active role on the board of directors of Vaad Hatzalah.

In 1935, Rabbi Ginsburg handwrote a letter in Hebrew encouraging the community to give charity to the Jewish National Hospital. The letter has been digitally preserved and can be viewed today.

To[dropcap] To say that Rabbi Ginsburg was a prolific author would be an understatement. He publishes his first book, Yalkut Yehuda, on the book of Genesis, in 1931. Between the years 1933 and 1944, he proceeded to the publication of 10 other books on various subjects (as indicated below).

In an act of humility and respect, Rabbi Ginsburg attributed his ability to publish so many books in such a short time to the merits of the city of Denver and the Jewish Saints who resided there.

Although Rabbi Ginsburg’s work covers several different areas of Jewish law and tradition, it is clear from the introductions to his books that he had only one goal.

He is concerned that the Torah teachers of his generation did not adapt their teaching style to the needs of their students. The teachers focused on dry questions of Halachah, but students are not receptive to their style and fail to retain the very important information they convey.

He believes that many Jews left Judaism because they did not really understand the Torah value system and the morals it represents.

Further, he laments that there are some very wise Torah scholars who do not uphold Torah values. They understand the Torah in its depth, but do not respect the virtues it preaches.

His way of solving both problems was to weave the ethical values â€‹â€‹of the Torah into what appears to be a dry legal code.

In his words, he attempts to give future Torah scholars the water to enable them to properly digest the bread that is Torah. he mixes Aggada (non-legal exegesis) with Halachah (law) in an attempt to allow the wisdom of Torah to penetrate deep into the hearts of anyone who reads what they write.

This is a six-volume set that covers the five books of the Bible (he wrote two versions of Yalkut Yehuda on Genesis, the second being much larger than the first).

He then published a two-volume set entitled Musar HaMishna on the first four orders of the Mishnah.

This set is perhaps the purest version of Rabbi Ginsburg’s attempt to glean ethical values â€‹â€‹from what appears to be a barren legal text.

In his introduction, he admits that this is a path that has not been taken by many and explains that this is why he was unable to successfully extract ethics from certain sections of the Mishnah. He encourages others to follow in his footsteps and continue what he started.

In the middle of editing Musar HaMishna Rabbi Ginsburg has also published a single volume titled Keser HaShabbos – a collection of several essays on the day of Shabbos.

He included his comments on Pirkei Avos and Shir Hashirim, two books that are commonly studied on or immediately before Shabbos.

The latest set of volumes he published is titled Musar HaNevi’im, a commentary on the early prophets (the books of Joshua, Judges, Samuel and Kings).

He also intended to continue writing on the prophets and subsequent writings (see the introduction to the first volume of Musar Haneviim), but died before he had a chance to do so.

Rregarding Yalkut Yehuda on Leviticus, Dr. JW Marcus of Jewish mail (Chicago, June 10, 1934), wrote: â€œThe eminent author shows in his third volume the same great knowledge of Talmudic and Midrashic literature as in his previous volumes on Genesis and Exodus. He takes the “dry” passages of Torat Cohanim and transforms them into golden chains on which he threads the colorful and sparkling jewels that dot the Talmuds, Mechilta, Midrashim, Yalkutim and other writings of our ancient and sublime religious literature. .

“It is therefore desirable that our Jewish intelligentsia, which finds no opportunity to seek in the depths of our sea of â€‹â€‹knowledge, travels the Yalkut Yehuda by Rabbi Ginsburg. They will be fascinated.

Based on a quote from Libby Rosen (cited in an article published in the Jewish News from the Intermountain in 1996), Rabbi Ginsburg’s funeral “lasted boulders and boulders.”

In 1959 a new synagogue was built for the Zera congregation Israel in his memory.

Yehi Zichro Boruch – may the memory of Rabbi Ginsburg be an eternal blessing.

Several people who helped me write this article. Thanks to Dr Jeanne Abrams and David Fasman for their help in finding information about Rabbi Ginsburg at the Beck Archives in DU. Thanks to Chris Leppek Associate Editor of the IJN, for providing me with Rabbi Ginsburg’s IJN 1946 obituary. Last but not least, I want to thank my mother for inspiring me to look more closely at the life and work of Rabbi Ginsburg.

Aaron Brooks is a student at Yeshiva University.

From the community editorial board: BVSD reminder