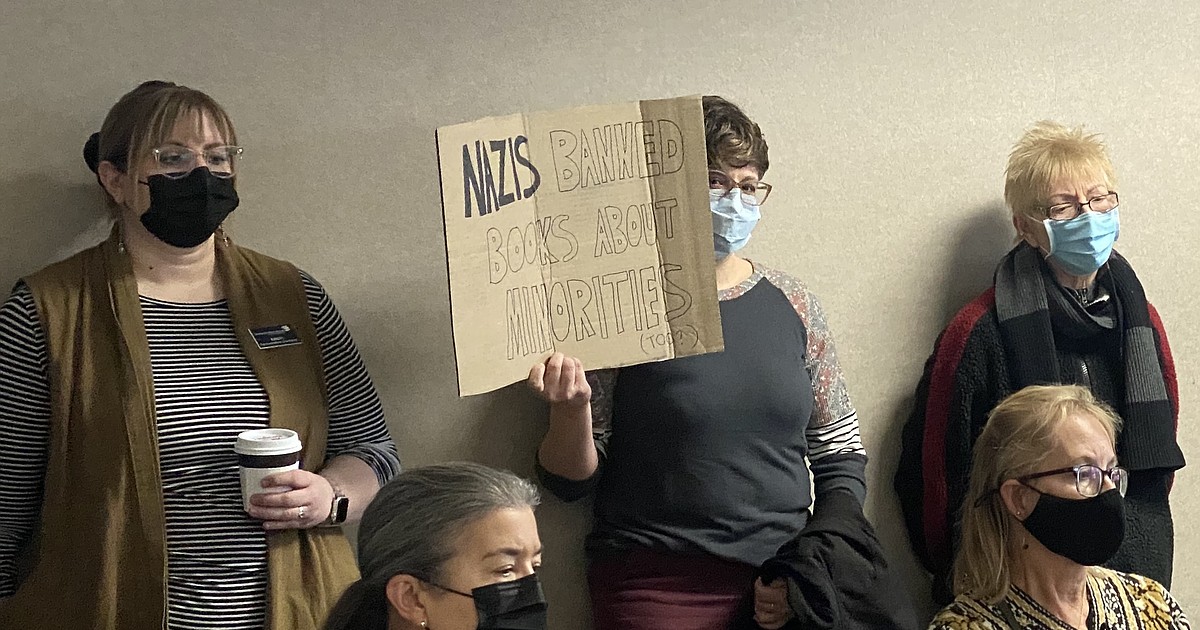 POST FALLS – The crackdown on gay and transgender material at Community Library Network facilities drew a crowd on Thursday.

Despite a snowstorm and freezing temperatures, dozens of citizens attended a meeting of the library board.

For several months now, CLN administrators have heard concerned residents tell them what they believe should be allowed in public libraries.

Nearly 50 people gathered in the Post Falls Library board meeting room on Thursday. Around the room were LGBT and queer pride flags, clothing and posters depicting rainbows.

Signs held by participants featured phrases such as “I deserve to know our history”, “LGBTQ + children exist”, “CDA4Pride” and “The Nazis banned books on minorities.”

Part of the conflict stems from a CLN program aimed at adolescents and LGBTQ + allies aged 11-18 called “Rainbow Squad”.

Rainbow Squad is a monthly program that the library system has hosted for about three years. According to the network’s website, Rainbow Squad participants participate in crafts, activities and games.

On November 20, Rainbow Squad attendees were greeted by a crowd of community members holding homophobic and anti-transgender signs outside the entrance to the Post Falls library.

The press wrote about the Rainbow Squad protest and previous LGBTQ material board meetings on December 1.

During the directors’ public comment period Thursday, 16 people testified in support of allowing community library network facilities to continue to offer LGBTQ-related literature and programming. Eight speakers expressed their opposition to the literature, programming or discussion of gay and transgender topics in public libraries.

In the ALA statement, the association condemned “acts of censorship and intimidation” by organizations that have launched campaigns to suppress books and materials on gay people, gays, transgender people and men. people of color.

“We oppose censorship and any effort to coerce belief, suppress opinion or punish those whose expression does not conform to what is considered orthodox in history, politics or belief, “the statement read. “The free exchange of ideas is essential to the preservation of a free and democratic society.”

Rathdrum resident Nina Beesley referred to several laws under Title 18 of the Idaho Code, Chapter 15, regarding the crime and punishment of disseminating obscene material to minors.

“Such materials and performance are a contributing factor in criminality, juvenile criminality, and also a fundamental factor which undermines the ethical and moral development of our youth,” Beesley read in the act.

Here are other comments from the public:

â€œI think children are sufficiently sexualized, especially through pornography and just exposure to sexual acts in general, online, in the media, stuff like that. I think we should stop sexualizing them. children and stop exposing them to so-called alternative lifestyles, which I don’t believe in, I’ll say the same. “

“This is Idaho. We believe in freedom. Whether it’s religious freedom, the freedom to love, the freedom to raise our children as we want or to read what we want. Stop trying. to ban books. Absolutely nothing in the Community Library Network’s list of LGBTQ children’s books is anything sexually explicit. “

David Reilly, former candidate for the Post Falls School Board

â€œFor the last 60 or 70 years there has been a censorship program in this countryâ€¦ against traditional Christian values. These folks all claim to oppose censorship, but each of them rejoiced at the day Trump was banned from Twitter. It’s no censorship. It’s about promoting the gay agenda and corrupting our children. These people are perverts, and they are trying to pervert our children. “

â€œ(My son’s friend Emma) decided to start transitioning and her parents took the initiative to support her, but later in life she regretted making that choice. sensitive topics that must be approached with an adult maturity so that they do not make decisions that they will end up regretting all their lives. ”

For several months, the administrators of the CLN have been discussing a policy for evaluating current and future activities.

â€œWhat we’re working on is how narrow or broad the policy should be,â€ CLN director Amy Rodda said in a recent interview with The Press. â€œWe need a policy that provides a pleasant overall framework but is not too limited in order to support the views and perspectives of all audiences. “

Administrators have already approved a guideline for the selection of library materials in 2018. According to the document, it aims to “maintain a balanced and diverse collection of materials that meet the information, educational and recreational needs of our residents â€.

The administrators continued their discussion on the programming policy on Thursday. The board also heard a request from first-year administrator Rachelle Ottosen to discuss whether CLN should “allow children 12 and under unrestricted access to sexual / LGBT material” in a future agenda for the board.