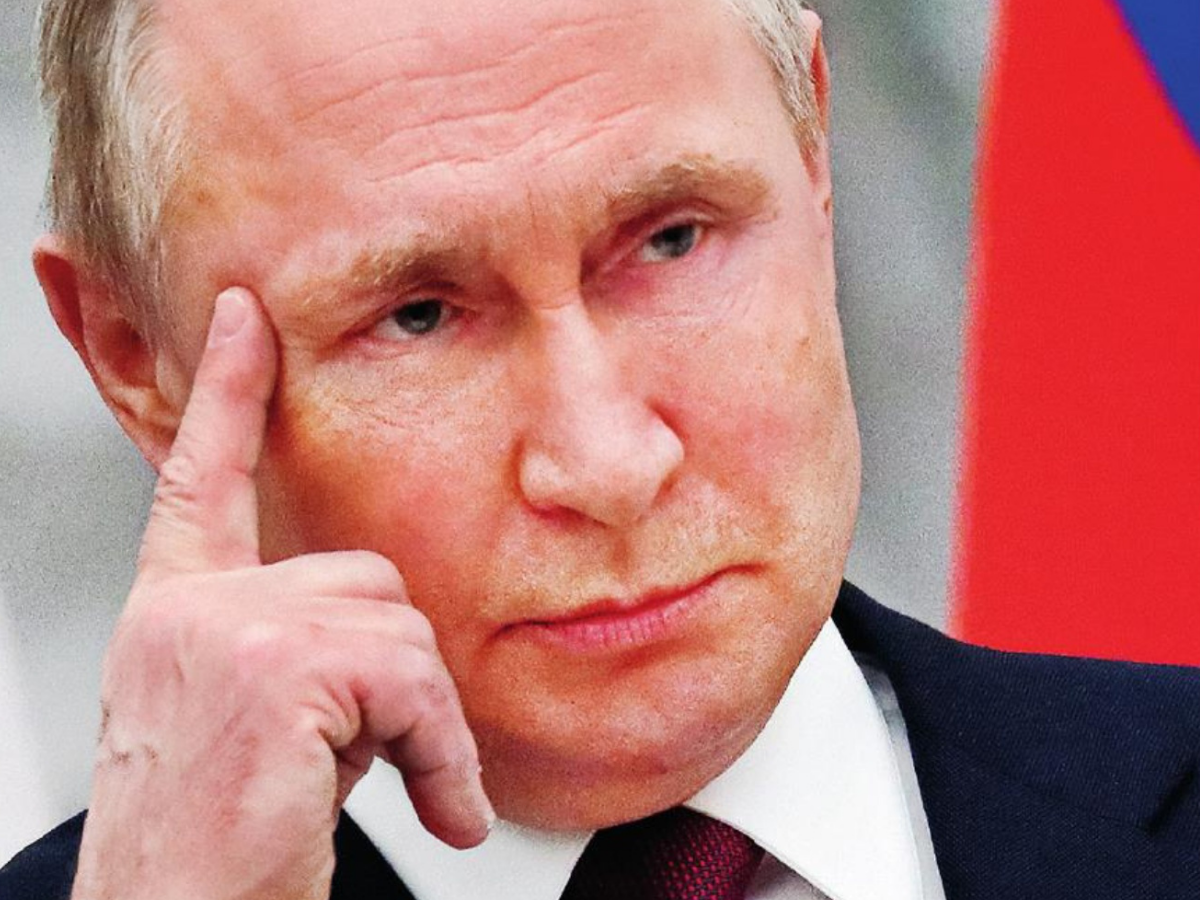 How to explain the medieval return, the horror that is taking place in Ukraine? Is Putin’s paranoia the only reason? Is there something ineluctably “Russian” in such brazen aggression? Can a culture that gave the world Chekhov, The Karamazov Brothers, the Bolshoi, Tchaikovsky and Andrei Rublev also give us the Holodomor (the artificial Soviet “terrorist famine” in Ukraine), the Gulag, Chernobyl and, now, this ? YOU are looking for clues

Historically, Russia has caused a lot of suffering in its neighborhood and in the rest of the world, but its cultural contribution is also immense. It shaped people’s minds and affected their senses, sensibilities and states of being. The special fascination that Russia has always had for Kerala and the Malayalis is due to this cultural repertoire. As several scholars and observers of Rossiyanin (“Russianness”) have said, Russia represents polarities: the lowest and the highest, the most despicable and the noblest, blasphemy and holiness, cynicism and idealism, all meet here. Fiodor Dostoyevsky in his writings and Andrei Tarkovsky in his cinema have strangely captured this synthesis of opposites.

But Vladimir Nabokov said it best: “The truth of old Russia was never a comfortable companion; he had a violent temper and a heavy step. It was not just truth, not just everyday pravda, but the immortal istina not truth but the inner light of truth. When Tolstoy found it in himself, in the splendor of his creative imagination, then, almost unconsciously, he was on the right track. What does his struggle with the ruling Greek Catholic Church matter, what significance do his ethical opinions have in the light of this or that imaginative passage from one of his novels? »

The West as “other”

Russian leaders, from Stalin to Putin, have always exploited identity to achieve their imperial goals. Ukraine plays a central role in Russia’s identity, both as the “other” to distinguish Russia and as part of a pan-Slavic identity. But the real “other” is the West and its democratic institutions. Instead of democracy, Putin’s idea is to encourage autocracy; instead of unity, division and xenophobia instead of open societies. ‘Instead of letting people hope for the best, they promote nihilism and cynicism,’ says historian Anne Applebaum who believes Putin is often misrepresented as a Russian nationalist when in fact he is an ‘imperial nostalgic’ . The Soviet Union was a Russian-speaking empire and Putin’s goal is to recreate at least part of it. Putin aims to destabilize and, if possible, destroy Western and democratic institutions and undermine American influence wherever he can. These are big goals, certainly beyond Putin, but like Lenin, Stalin and their Soviet successors, there is no harm in dreaming big. Putin will eventually fail but, as Applebaum says, he can do a lot of damage trying. Ukraine is proof of that.

Vladimir Putin reportedly had portraits of Peter the Great hung in several important Kremlin meeting rooms. Peter the Great became the “Tsar of All Russia” after the Battle of Poltava on July 8, 1709, when his forces defeated the armies of the Swedish Empire in the decisive battle of the Great Northern War. On the eve of the battle, Peter proclaims to his troops: “Soldiers! The hour has come when the fate of the whole country is in your hands! Either Russia will perish or it will be reborn!

Putin’s action in Ukraine contains something of this apocalyptic tone. But Putin’s real hero may well be St Volodymyr. Serhii Plokhy, among the most renowned Ukrainian scholars in the West, professor of history at Harvard and director of the Ukrainian Institute of Harvard, in his book Lost Kingdom, states: “A monument to St Volodymyr/St Vladimir was recently built in the most coveted, the most prestigious, the most visible place in the Russian capital, just opposite the Kremlin… Saint Volodymyr, the prince who reigned in Kiev, is more important in the Russian capital in terms of size and d location of the statue that the alleged founder of Moscow, Yuriy Dologorukii. Some pundits say that St Volodymyr is a namesake of Vladimir Putin so it really is a celebration of Putin but other than all that there must be a very special understanding of Kyivan’s history to allow someone to to place in the very center of Moscow a statue of a sovereign who reigned in a city which is today the capital of a neighboring country”.

Interestingly, Saint Volodymyr was a key part of “Synopsis”, the first Russian history textbook, which was written in Kiev. This book shaped Russians’ understanding of who they are, even today. The development of a separate Ukrainian identity, literature and language was met in the 19th century with attempts to stop this development. The battles then begin and focus on history and language, but for a long time the goal of Ukrainian activists has been autonomy, not independence per se. The idea of ​​Ukrainian independence for good was put on the political agenda in the 20th century and since then it has refused to leave. In the 20th century, there were five attempts to declare an independent Ukrainian state. Plokhy says: “The fifth was successful in 1991, and then the question was, ‘Okay, you have a state, but what kind of nation does Ukraine have or will it have? Is it ethnic? Is it political? What separates Russia from Ukraine? »

Russian society has a tradition of attaching extraordinary importance to literature and the written word. The other side of the coin was of course censorship; Many of Russia’s greatest writers endured exile and imprisonment. One of the reasons for Pushkin’s eminence was that the Tsar had personally censured him. Some great writers have of course captured this contradiction between the importance given to literature and the repression of what was unpleasant. As Costica Bradatan pointed out, Dostoyevsky’s The Brothers Karamazov was one such work.

“In The Brothers Karamozov, the prosecutor Ippolit Kirillovitch pleads for the conviction of Dmitri Karamazov, he evokes the image of two abysses between which the accused, according to him, is caught. One is “the abyss below us, an abyss of the lowest and most fetid degradation”, while the other is “the abyss above us, an abyss of lofty ideals . “Two chasms, gentlemen,” said the prosecutor, at the same moment – without that […] our existence has no meaning…”

Bradatan argues that each of the brothers represents a different facet of Russia. Ivan – “there is a great and unresolved thought in him. He is one of those who do not need millions, but need to solve their thinking” – represents Russian philosophy itself, while Alyosha represents Russian spirituality – “the theology of beauty and incarnation, the mysticism of the earth, the spiritual function of humility and holy madness – they belong to Alyosha as much as to the great Russian religious figures, from Leo Tolstoy to Pavel Florensky via Andrei Tarkovsky. Alyosha has an “angelic” function in the novel, always carrying messages, always in a hurry somewhere, bringing people together, trying to reconcile opposites.

Meanwhile, Dmitry Karamazov is the face of ordinary Russia. Dmitri is impulsive but noble; naive but also ready to sacrifice himself; he acts stupidly, but always generously; he is ready to kill his father for money, but is never petty; he usually gets drunk on poetry and alcohol, unable to separate the two forms of drunkenness. “He ends up poorly framed, as ordinary Russia always does,” concludes Bradatan. It’s an epitaph Putin could choose or, if it didn’t fit his vanity, it could at least be something he would mutter, as a self-proclaimed Orthodox believer, in the confessional.

As author and historian Dominic Sandbrook recently wrote in an article: “Since the mid-17th century, the Cossacks of the Zaporizhian Army in what is now central Ukraine were the vassals of their Russian neighbors to the north. But just before the Poltava clash, the Cossack leader Ivan Mazepa decides to switch sides, abandoning Peter the Great and casting his spell with the Scandinavians. He was fighting, he said, “for the common good of our mother, my homeland, poor Ukraine.” The defeat at Poltava destroyed his dream of Cossack independence and he fled across the border to Ottoman Moldavia and soon died”.

In the years that followed, when central and eastern Ukraine was part of the Russian Empire, Mazepa was portrayed as an anti-Russian traitor. Every year, on the first Sunday of Lent, he was ritually cursed in Orthodox churches. Even in the Soviet Union he was condemned as a “Ukrainian bourgeois nationalist”. “But now many Ukrainians see him as a national hero. Not so long ago, Ukrainian President Petro Poroshenko unveiled a statue of Mazepa in the center of Poltava. Today his face adorns Ukraine’s 10 hryvnia note,” writes Sandbrook.

“We spoke several times between meetings, and he managed to sit next to me at a dinner party, accompanied by his interpreter. At that dinner party, he asked me: ‘What is the most important obstacle between your Western businessmen and my Russian compatriots in starting business relations? Off the top of my head, I answered: “The absence of legally defined property rights – without these , there is no basis for resolving disputes. “Ah yes,” he said, “in your system, a business-to-business dispute is resolved by hourly paid lawyers representing each party, sometimes carrying the dispute in court, which normally takes months and accrues hourly attorney fees.”

“In Russia,” he continued, “disputes are usually resolved by common sense. If a dispute is over money or very important property, both parties usually send representatives to a dinner party. those who arrive would be armed. Faced with the possibility of a bloody and fatal outcome, the two sides always find a mutually agreeable solution. Fear is the catalyst of common sense. He used his argument in the context of disputes between sovereign nations Solutions often require an element of fear of disproportionate responses if no agreement is reached.The idea of ​​forcing adversaries to face horrible alternatives seemed to excite him.”

The opinions expressed above are those of the author.

How Germany and the United States Became Best Friends

Armed violence can be reduced through a strategy of deterrence

Nature affects our lives in more ways than you might think, new study reveals