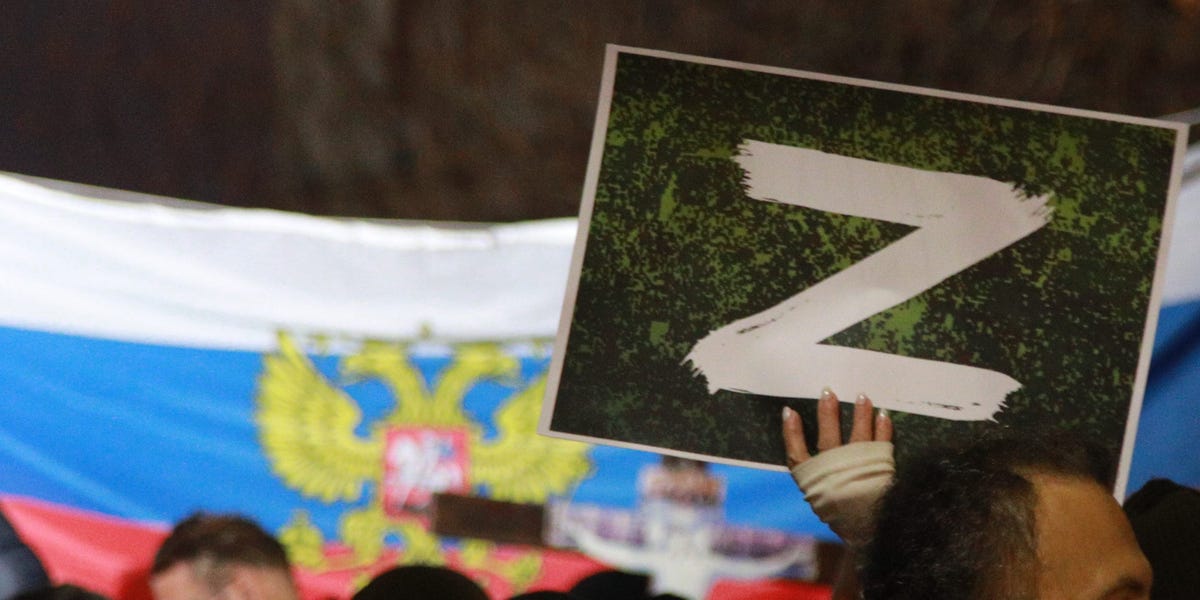 A new symbol of Russia’s war against Ukraine has emerged – a white “Z” emblem, stylized in a thick brushstroke. It found its way onto the placards and t-shirts of pro-Russian ultra-right protesters, was painted on Russian tanks and military vehicles, and was worn as a sign of support for the Russian invasion.

In recent weeks, the “Z” has changed from a military mark to a powerful symbol of support for Russia’s invasion of Ukraine. And there are signs that Russian nationalist groups have also co-opted the brand.

The emblem was first spotted on Russian tanks in February

Twitter Commenters speculated that the “Z” symbols, which appeared on the tanks framed by squares, triangles and other painted shapes, could be a means of delimit the infantry.

Kamil Galeev, a former Galina Starovoitova Human Rights and Conflict Resolution Fellow at the Wilson Center policy think tank, tweeted that some interpreted the “Z” as short for “za pobedy” – the term Russian for “victory”. Others have guessed that the “Z” is short for “zapad” (or west) and is meant to denote westbound infantry.

The meaning of the symbol has not yet been confirmed by Russian military sources.

A symbol of Russian nationalism and a rallying cry for Putin

Despite the letter “Z” not being in the Russian Cyrillic alphabet, the letter seems to have woven itself into the larger narrative of the Russian war.

Cars emblazoned with the “Z” logo have been spotted across Russia, and companies have also co-opted the symbol.

On March 4, a crowd of pro-Russian far-right Serbian protesters marching in Belgrade waved signs decorated with the “Z.”

Similarly, a group of Russian nationalist protesters in Leningrad were filmed wearing hoodies emblazoned with a white “Z” with the words “We don’t give up on ours”. It’s unclear when the video was taken, but it surfaced on social media during the first week of March.

The slogan echoed false claims by Russian propagandists that the invasion is intended to “liberate” and “denazify” Ukraine — an independent democracy headed by a Jewish president.

On Sunday, a Russian gymnast appeared at a medal ceremony with a “Z” plastered on his uniform

Russian gymnast Ivan Kuliak stuck a “Z” symbol on the front of his uniform while accepting a medal at the Gymnastics World Cup in Doha on Sunday. He came third, behind Ukrainian Illia Kovtun, who came first.

Pro-Putin figures also bears the symbol. Marie Butin, convicted russian spy and current member of Russia’s State Duma, was seen in a video removing her blazer and drawing a “Z” on her lapel.

Insider’s live blog on the Russian invasion covers developments as they occur.

Critique of “The Moisés Ville Murders”: A Forgotten “Jerusalem”