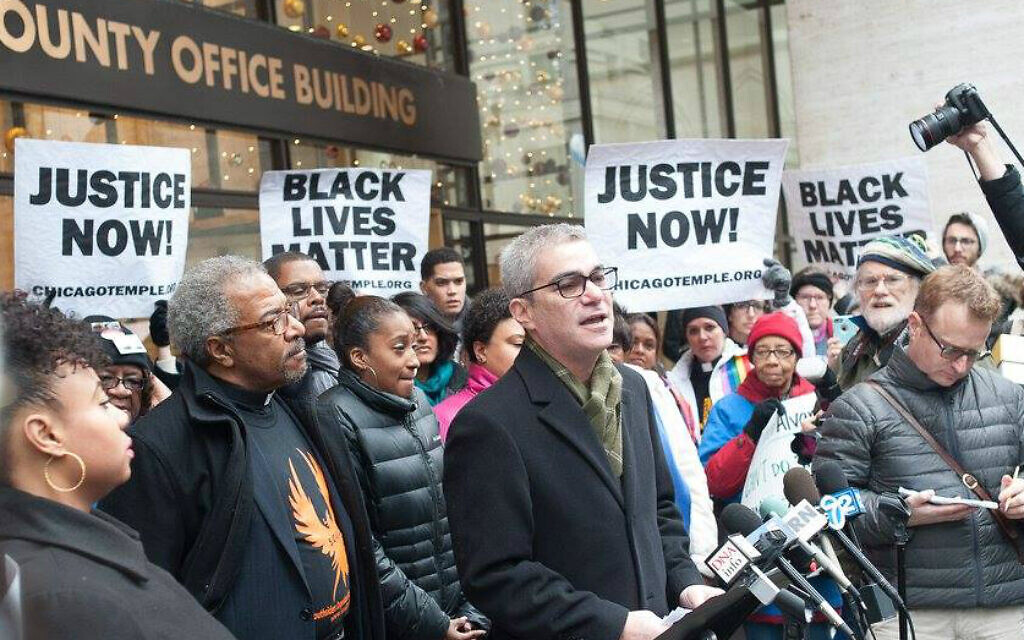 CHICAGO — Chicago’s Tzedek Synagogue has voted to adopt anti-Zionism as a “core value,” becoming the first known American congregation to officially take such a stance.

Members of Tzedek, a non-denominational congregation founded in 2015, voted last week to pass the measure. The synagogue’s 12-member board unanimously approved the move in December.

“Jews have a moral precept to seek justice and stand in solidarity with the oppressed,” Rabbi Tzedek Brant Rosen said, saying anti-Zionism is an extension of that effort during an interview Sunday with the Times of Israel. Israel.

Seventy-two percent of Tzedek members supported the decision, with the rest accepting the decision and choosing to remain in the community, while a handful of American Jews reached out to join in the announcement of the vote. , Rosen said. There are about 200 families in the congregation.

The vote represents further evidence that there is a demand for such religious institutions in the American Jewish community, Rosen said.

Virtually all synagogues in the United States are Zionist by default, given their affiliation with the various major denominations that support the Jewish state to varying degrees. A handful of congregations identify as non-Zionists in an effort to create space for pro-Palestinian activism, which is increasingly popular among young liberal Jews. But these communities are small and marginalized by mainstream Jewish organizations, which see a connection to the Jewish state as an essential part of Jewish identity.

The ultra-Orthodox Satmar sect, which has tens of thousands of members in the United States, goes even further in its opposition to Zionism, believing that a Jewish sovereign power can only rule the land of Israel upon return of the Messiah. The Satmars still enjoy some degree of interaction with mainstream Jewish organizations, as opposed to the fringe group Neturei Karta, which is more active in its anti-Israel efforts.

These groups hold anti-Zionist religious beliefs, but they are not individual congregations and do not make decisions about their principles as Tzedek did last week.

Members of Naturei Karta protest against Prime Minister Naftali Bennett outside the United Nations as Bennett gives a speech inside, in New York, September 27, 2021. (Luke Tress/Flash90)

Reactions to Tzedek’s announcement seem far more vocal than responses to ultra-Orthodox anti-Zionists, with important pro-Israel voices weighing in on the decision with more or less contempt.

A leader of the Jewish Federations said their branch had so far sought to “avoid giving [Tzedek] all oxygen” by issuing public responses to the various anti-Israel measures he has taken. But they acknowledged that the most recent decision “may not be something we can ignore”.

“Make no mistake. What they are saying has nothing to do with the politics of Israel. It is about the mere existence of Israel as a Jewish and democratic state. For them, the Jewish people are the only people in the world who do not deserve their own state,” he told The Times of Israel, calling Tzedek a “fringe voice” while thanking the wider Chicago Jewish community for their support of Israel.

Rosen said he is “under no illusions” that Tzedek’s decision will lead to a change in how mainstream Jewry relates to Israel, even in the long term.

He argued, however, that there is still a desire for the space his congregation provides, especially among young people “who are not brought up with the same relationship to Israel as their parents were” and who are alienated by the current discourse in American Jewry. community.

Proud to announce that the members of my congregation, @TzedekChicago, have just voted to adopt anti-Zionism as a fundamental value. We will send you more information about our decision very soon.https://t.co/i8EiHKArYd pic.twitter.com/RHfj3uZTDN

Rosen has long held views on the Israeli-Palestinian conflict that are outside the mainstream, but he was trained in the Reconstructionist movement and led several Reconstructionist congregations across the United States.

He left the last of those positions at the Jewish Reconstruction Congregation in Evanston, Illinois, in 2014 due to disagreements with some congregational members over his views on Israel.

The decision by Tzedek members will not have many practical implications because he has already partnered with a number of anti-Israel and pro-Palestinian coalitions and actions in the community. But Rosen said the statement against Zionism is important in itself.

The tzedek spiritual leader admitted that supporters and opponents within his community feared the decision would lead to the synagogue being defined by what it opposes and upholds. However, Rosen insisted that actively supporting anti-Zionism is part of a larger set of values ​​rooted in the idea that “the Diaspora is the place of Jewish life.”

Pressed on whether a sovereign Jewish state could be essential to protecting Jews amid past, present or future spikes in anti-Semitism, Rosen said the creation of the State of Israel has “exacerbated the anti-Semitism of many manners”.

“I think it’s a misnomer to think that somehow you can just run into a country and build your army and all of a sudden the Jews of the world will be safe,” he said. he declared.

Particularly when that state “comes at the expense of another people”, which, according to Rosen, is “extremely problematic”.

Rabbi Brant Rosen, founder of the non-Zionist Tzedek Synagogue in Chicago, and members of the congregation perform ‘havdalah’ at a Jewish Voice for Peace rally. (JVP Chicago)

Despite his marginalization, Rosen said he still felt his community was part of “Am Yisrael,” the Jewish people.

He maintains this belief, while subscribing to the idea that some of these same “family” members are engaged in the ethnic cleansing of Palestinians. At the same time, Rosen and Tzedek signed Palestinian calls to boycott his figurative Israeli relatives.

“That’s what it means to be in a family. This includes people with whom you very strongly disagree with the approach – and they feel the same way about us,” he said.

If so, we have a request.

Every day, our journalists aim to keep you up to date with the most important developments that deserve your attention. Millions of people rely on ToI for fast, fair and free coverage of Israel and the Jewish world.

We care about Israel – and we know you do too. So today we have a question: show your appreciation for our work by join the Times of Israel communityan exclusive group for readers like you who appreciate and financially support our work.

yes i will give

yes i will give

For just $6 a month, you can help support our quality journalism while benefiting from The Times of Israel WITHOUT ADVERTISINGas well as access Exclusive Content only available to members of the Times of Israel community.

Thank you,
David Horovitz, founding editor of The Times of Israel