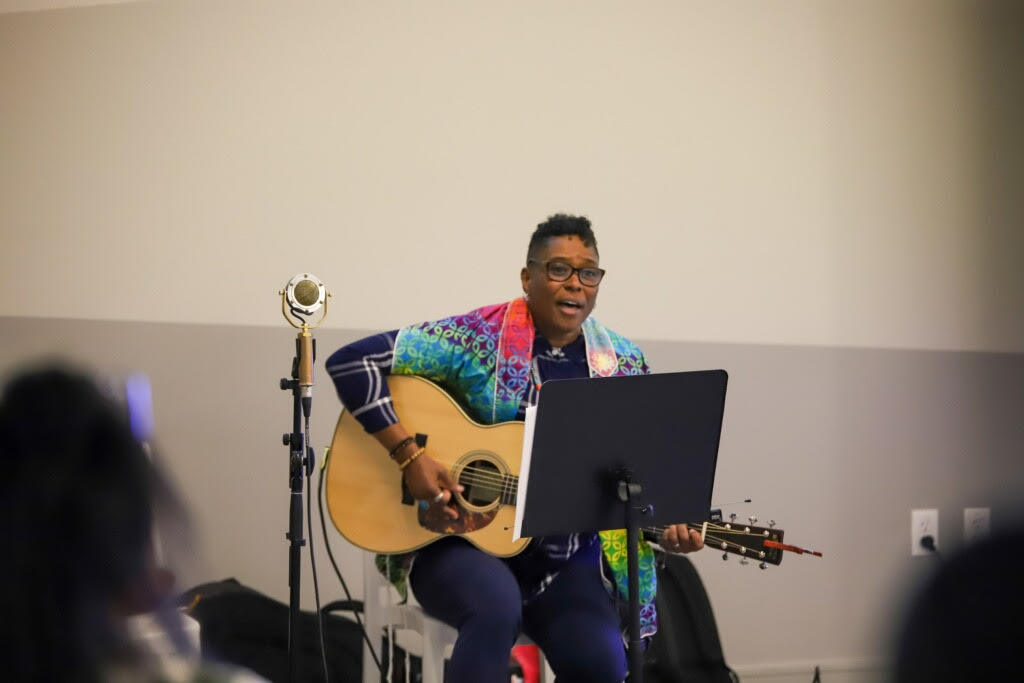 (RNS) – Songs sung at this Friday night Sabbath service included the traditional “Lecha Dodi,” as well as “Wade in the Water.”

The musical accompaniments were a guitar and an African drum.

This pioneering service marking Juneteenth — the day (June 19) in 1985 when Major General Gordon Granger arrived in Galveston, Texas, to deliver the message that the Civil War was over and slaves were free — was a first in many ways.

Held at the Distillery of Modern Art, an event space 18 miles north of downtown Atlanta that doubles as a gallery and cocktail lounge, it was the first Jewish service organized and run by Jews in color to mark the annual celebration of freedom which is now a federal holiday.

RELATED: Grappling with the Sacred in the Juneteenth Freedom Celebration

“Jewish demographics are changing rapidly,” said Rabbi Sandra Lawson, one of the organizers and leader of Kol Hapanim or “All the Faces”, an inclusive Jewish worship group. “We have to recognize that there are significant numbers of Jews of color. Because there are a lot of black people in the Jewish community, we have to celebrate June 19.

While American Jews are overwhelmingly white, they have slowly embarked on a new racial consciousness.

The Friday evening service, co-sponsored by the Council of Colored Jews of Atlanta, was one of many Jewish commemorations of June 19 this weekend. In Greensboro, North Carolina, Temple Emanuel’s Friday service focused on the efforts of white worshipers to desegregate Woolworth’s lunch counter during the 1960s civil rights movement.

Washington Hebrew Congregation in DC celebrated by sending a delegation to Saturday’s Moral March on Washington. On Sunday, he screened a film, “Who We Are: A Chronicle of Racism in America.”

RELATED: American Jews are taking a close look at racism among them

The Atlanta Council of Jews of Color co-sponsored the Juneteenth Shabbat service on June 17, 2022, the first to be planned and hosted by Jews of Color. Photo courtesy of Dedra Walker/Emory Rose Photography.

In Atlanta, the service led by Lawson and Koach Baruch Frazier, a rabbinical student at Reconstructionist Rabbinical College in suburban Philadelphia, was attended by 60 people in person and another 400 online, with people watching across the United States. United, Canada and as far away as Melbourne, Australia.

It began with the traditional Hebrew blessing “Shehecheyanu”, commonly recited on special occasions to thank God for new and unusual experiences. Lawson and Frazier then riffed on “Woke Up This Morning with my Mind Stayed on Freedom” and “Ain’t Gonna Let Nobody Turn Me Around,” popular black spirituals.

“The Torah says in several places that you can’t enslave humans forever,” said Frazier, who delivered a short sermon or “drash” near the end of the service. “Doing so is an affront to God.”

Frazier then turned to the weekly Torah portion, the book of Numbers 9, in which Moses teaches the people of Israel how and when those unable to celebrate the Passover Feast of Freedom at its usual time can do so. later.

Just as slaves in Galveston, Texas celebrated their freedom two and a half years after the 1863 Emancipation Proclamation, there were also provisions in the Torah for a second Passover, Frazier observed.

“In our own liberation effort, there have been moments of utter despair, relief and joy,” Frazier said. “As we honor our ancestors and their charge to never let anyone take our joy away from us, may we keep walking, keep walking and celebrating dignity until we find ourselves in our own promised land of redemption .”

Victoria Raggs, executive director of the Council of Colored Jews of Atlanta, said it was fitting that the first known Jewish Juneteenth organized and led by Jews of Color was held in Atlanta, the birthplace of the civil rights movement.

The nonprofit began three years ago to advocate for Jews of Color across the South and seeks to ensure their representation in a variety of Jewish community spaces, including synagogues, Jewish day schools and camps. Jewish summer.

“As Jews, we are not an island unto ourselves,” Raggs said. “Everything is connected. This is a time to live our values ​​and the values ​​of America, freedom and justice for all.

When death becomes life. The will of the Holy Land… | by Daniel Mark Harrison | June 2022