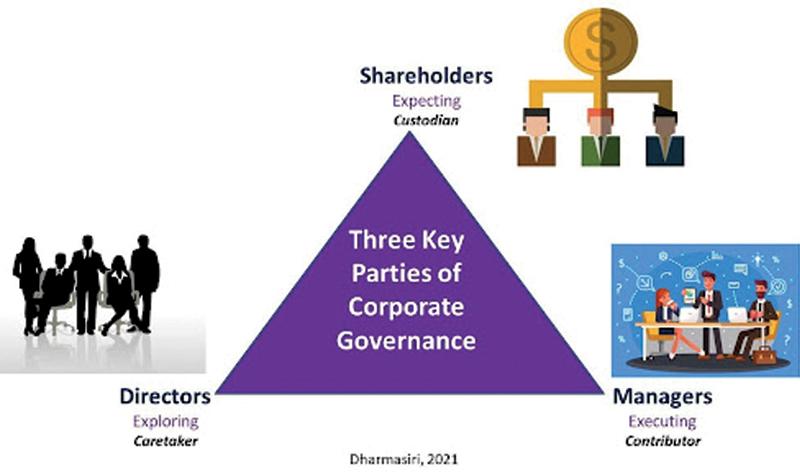 Overview of Governance: From a Broad Perspective to Board Practices

I stepped down as an independent non-executive director of a leading financial institution a few months ago. My nine-year association with her, as well as my continued involvement with several other companies has given me greater exposure to governance. It was about enriching myself in the creation of shared value for the benefit of the institution in particular and economic growth in general. Particularly for me it was a valuable two-way exchange as I contribute to an institute and bring back this experience to enrich my association with the “learning partners” of the MBA. Today’s column explains how I experienced governance, from a general perspective to the practices of boards of directors.

Governance is a much broader concept than typical corporate governance. According to the United Nations Economic and Social Commission for Asia-Pacific (ESCAP), it can be defined as the decision-making process and the process by which decisions are implemented. These are essentially the initiation and implementation decisions. We can see this happening at four levels, namely, international, national, sectoral and institutional.

Global bodies such as the United Nations advocate governance as a key requirement to ensure “a life of dignity for all” as progress is accelerated towards the Sustainable Development Goals. From a national perspective, we can still remember the perspectives and problems that Sri Lanka experienced during the “Yahapalana” regime. Whether it really is about exhibiting the expected precepts of “good governance” remains a debatable subject. I chose to use the term “exemplary governance” during my tenure as Director of the Postgraduate Institute of Management (PIM), where governance has been a key pillar of its “edifice of excellence”.

We can see the need for governance at four general levels, namely, international, national, sectoral and institutional. Exemplary governance is in high demand at the national level in many countries including Sri Lanka. It is in fact the interaction between the state, civil society and the business sector. I would suggest triple P’s to think about to deepen such an interaction. They are linked to proactivity, predictability and productivity,

Aspects of governance related to proactivity include looking to the future with a good set of vision, mission and action. It begins with aspiring to a desired state (vision) and clearly identifying the reason for achieving it (mission) and ensuring the execution of elaborate strategies (action). Sad to note the treatment of vision and mission as mere cosmetics by some, disregarding how vibrant nations got to where they are now with such a proactive approach.

Aspects of governance related to predictability include compliance, consistency and connectivity. It’s about ensuring professionalism on all fronts by being legal and ethical when decisions are made. Being consistent by being transparent as opposed to favoritism is also of great importance. In my opinion, connectivity is the need to involve all stakeholders to convince them of the need to comply with a set of policies, procedures and practices. Sad to note the varying occurrence of the above in many developing states and we are no better.

Rather than bemoaning the lack of the triple P above, what it takes is to start from somewhere. It is far too valuable to leave in the hands of politicians whose populist agendas are said to have many contradictions. One way to find solace is to see if we can draw inspiration from the eastern roots of governance.

The Eastern Roots of Governance

It is encouraging to see the “Dasa Raja Dharma”, or ten royal virtues, providing us with a solid foundation, as opposed to anything that can be called a “Western conspiracy”. In the ‘Kutadanda Sutta’ (Digha Nikaya), the Buddha explains that in order to eradicate crime, the economic condition of the people must be improved. The relationship between employer and employee should be made cordial primarily through the payment of adequate wages, gifts and incentives. As mentioned in an article by Danister Fernando (lankalibrary.com), these ten “best practices” can be briefly stated as follows:

If the : Morality – a high moral character.

Pariccaga: Make sacrifices for the greater good of the people.

Tapas: Restraint of the senses and austerity in habits.

It is believed that after the advent of Buddha Sasana in Sri Lanka, during the reign of King Devanampiya Tissa, in the 3rd century BC. governance. Needless to say if we see the presence or absence of these in the current day and time. As Martin Luther King said: “Let us light a candle rather than curse the darkness.” It is in this context that I would orient myself towards corporate governance.

Corporate governance at a glance

As described by the Chartered Governance Institute of the United Kingdom and Ireland, corporate governance is the system of rules, practices and processes by which a company is directed and controlled. Sir Adrian Cadbury (1929-2015), who was a pioneer in global governance who presided over the development of the world’s first corporate governance code in 1992, gives a much simpler but meaningful definition, “the way companies are managed and directed ”.

According to James McRitchie, publisher of the Pioneering Corporate Governance website (www.corpgov.net) since 1995, “Corporate governance is most often seen as both the structure and the relationships that determine leadership and the performance of the company ”. He also states that the board of directors is usually at the heart of corporate governance.

I observe three key players involved in corporate governance. Figure 1 illustrates my way of conceptualizing it.

As shown in Figure 1, shareholders expect returns as stewards of the organization, while directors explore pathways for sustainable growth while gatekeepers and managers execute strategies with associated actions as as contributors. The harmonized interaction between the Triple C parties, namely, the custodians, custodians and contributors, is essential to ensure exemplary governance.

As often mentioned in the literature, the four pillars of corporate governance are accountability, fairness, transparency and independence.

The board of directors, executive and non-executive, dependent and independent, is collectively responsible for the management of the company. It is serious business that goes beyond “going to meetings and having tea”. Executive directors are more involved in management tasks, being engaged full time with an emphasis on planning and implementation. In contrast, non-executive directors are more involved in governance tasks being hired part-time with an emphasis on advice and sharing of expertise.

With the dynamism of social media, a business cannot hide an unfair practice under the rug. It could be a minor case like the unwarranted extension of a product’s expiration date or a major case like the avoidance of a huge tax payment to the state. Transparency in statutory declarations and relationships with key stakeholders is essential. The independence of the board of directors in making the best decision for the organization without any direct or indirect external influence is the ideal scenario.

Within the Board, the chairman provides general management of the company while the CEO generates results by leading the functional experts. A clear division of responsibilities between the president and the CEO is essential to ensure the coherent engagement of the two. Another difficult task that I see in the Sri Lankan scenario is the balance of power on the board without undue concentration in an individual. The tendency to move away from minor operational issues without focusing on strategic issues and political aspects is a common temptation in boards of directors. Board members must follow certain precepts to ensure the expected governance.

They can be described as the need to be informative, responsive, empathetic, strategic, holistic, mature and human.

This is a call to update and update by being up to date. In a changing world, this is an absolute must. They are meant to bring new ideas to the discussion rather than just being rubber stamps.

Quick feedback for faster decisions is essential. Despite busy schedules and multiple commitments, it is necessary to react quickly to avoid delays and the associated disastrous consequences.

This is a required overall improvement as pointed out by many researchers. Respecting the point of view of others through a thoughtful listener will cost you nothing. The attitude of “my way is the highway” will not be the right way.

Demonstrating a futuristic approach is essential for collective success. Conceptual skills necessary for both visualization and evaluation should be demonstrated.

The need to see problems from multiple angles has become increasingly important in the new normal. The implications of a decision taken, whether positive or negative, must be assessed objectively.

The ability to handle constructive feedback is essential in the boardroom. Maturity in separating a person from his point and an individual from his idea is necessary to avoid unwanted interpersonal conflicts.

The need to respect precious human resources as the only living and dynamic resource that can take command and control of other resources, should be the way forward. COVID19 had shown us the value of “lives” more than “livelihoods” in painful ways.

The above seven precepts offer a recipe for an awakening to lasting results.

“Good corporate governance is about being decent and prospering,” said Toba Beta, an Indonesian economist. Governance on all fronts is not easy to navigate. He has to face major challenges. For example, dominance over democracy in deliberations is a common occurrence. The next column of human results will cover these challenges in relation to the Sri Lankan context.