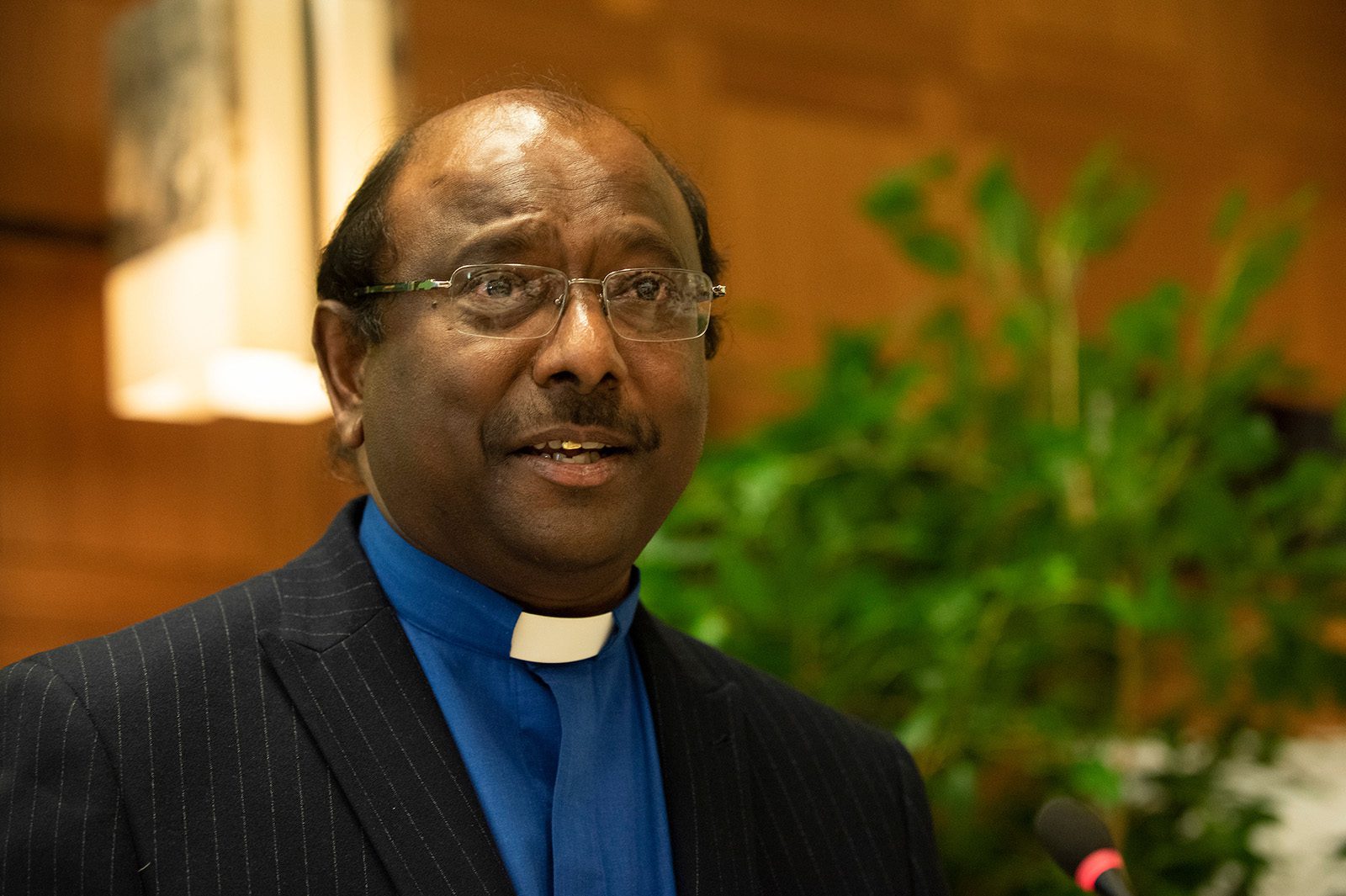 “Our task is to proclaim the name of God”

(RNS) – The Reverend Jerry Pillay, the Presbyterian minister elected general secretary of the World Council of Churches last month, takes the helm as the global ecumenical body is already under pressure to expel the Russian Orthodox Church from its ranks over of Patriarch Cyril of Moscow justifies his country’s brutal invasion of Ukraine.

But that’s not the only controversy the new leader faces: Pillay has come under fire since his election for past comments comparing the Israeli government’s treatment of Palestinians to his South Africa’s former apartheid policies. native.

Pillay, a former general secretary of the Uniting Presbyterian Church in Southern Africa, pushed back against the criticism, saying in a recent interview with Religion News Service that the pressure “comes with the territory”.

Pillay said he planned to tackle head-on the issues facing the WCC when he takes office early next year. “Ultimately,” he said, “our task is to proclaim the name of God.”

The following interview has been edited for length and clarity.

What are your reactions to your election?

It was very exciting for me. The COE played a central role in South Africa during the dark days of apartheid. Without the involvement of such ecumenical bodies, we would not have had so much international pressure on the South African government. So for me to be elected to this position is simply a joy of giving back, in a sense, a thanksgiving, joyfully acknowledging the role the WCC has played in our own context.

What do you hope to accomplish? Are there any projects that particularly interest you?

The WCC is certainly a very wide range of different churches with a great sense of diversity, with doctrines and theology and views on ethics and so on. One of the highest priorities is to work towards the unity of these churches, so that we can indeed create a unity visible to the world in terms of united Christian witness.

My first task would therefore be to continue the work of bringing the Churches closer together, to seek the unity of the Churches, to identify and deal with the major world problems. Things like poverty, things like HIV and AIDS, things like pandemic, war and conflict.

The second thing concerns questions of justice. Justice is an important priority for the WCC. What is happening, where is it happening, and how do you talk to him? Where is human dignity at stake and in danger? Where are oppressed and disadvantaged human beings, whether through political structures, economic structures – religious structures too – and social structures. How does the World Council of Churches actually work to free people and set them free, as Jesus would say, in his own ministry, “I have come to set the captives free”?

Let me put this in context: a group of church leaders from South Africa went to try to understand the situation of the Israeli-Palestinian conflict, and a number of those church leaders were church leaders Blacks – prominent black church leaders in South Africa. We went to the Israeli side and the Palestinian side. We spoke to many people, including pastors, rabbis, locals and politicians, to better understand what was going on. We came back and wrote a response to what we had seen, heard and felt ourselves. The majority of black pastors – and I was quite surprised by this – actually said, “You know, it’s worse than apartheid,” based on what they’ve been through. Then we wrote a collective statement.

The 2016 article was an academic paper trying to capture these experiences and put them into context. The references and comparison of Israel and apartheid South Africa were not words from my own mouth – they are academic references. If you went to read the article, for example, you will see that it cites the United Nations and their declaration of apartheid in Israel.

I am not a politician and I have not read things from a political angle. Mine was introspection from a biblical perspective on justice, (and) what I saw from a justice perspective did not sit well with me.

Unfortunately, the right-wing Jewish media in particular took (the article) and, instead of focusing on the justice issues of Israel and Palestine, simply attacked me as being anti-Jewish and anti-Semitic – this which is completely unfounded.

In South Africa, I worked with Chief Rabbi Warren Goldstein for many years, working against apartheid, against corruption in South Africa, and working together to write a moral charter. (Jews in South Africa) know that I never mentioned that position – of being anti-Jewish or anti-Semitic. But defend justice? Yes, of course I am guilty. I will stand for justice and truth, and I will not compromise on that.

So what do you think of the boycott, divestment and sanctions movement directed against Israel?

From a justice point of view — and again, I want to reiterate this aspect, not from a political point of view — the call for sanctions and boycotts in apartheid South Africa has certainly led to the dismantling of apartheid in our country. there is no doubt. So in my view, when I wrote in 2016, I was basically saying boycott, sanctions, and divestment might be an option. I wasn’t necessarily asking for that. This is probably still an option to resolve the crisis in Palestine and Israel. But it’s not something I’ve openly advocated over the years.

Do you stand by your comparison between the Israeli government’s treatment of Palestinians and apartheid?

Apartheid in South Africa was mainly a matter of separate development – people promoted it as separate development. I have no problem with separate development. I have no problem with people who identify with a group or try to preserve a particular culture, norms, values ​​and even a race. What troubles me is when a culture or people prioritizes their particular vision, culture and identity over others – where oppression is involved. Where systemic oppression and policy formation victimizes and dehumanizes people so that other cultures and other people are not given equal status. This is precisely what we had in South Africa.

In the context of Israel-Palestine, it is obvious that the Jews claim Zionism and the right to retain their culture, their identity and their religion – I have no objection to that. But when we use this to oppress other people, to the detriment of other people’s justice, then the world must cry out. The churches have to rise up, say pretty strongly in the name of God, that such things are not acceptable.

Remember, going back to the context of apartheid, we had a so-called Christian government, and we had churches that justified apartheid. The churches raised up and said, ‘No, that’s not the same God we’re talking about.’

Whether in the Torah, the Koran or the Bible, we must think of a God of justice and love.

Have you reached out to your detractors? Are you concerned about the impact this will have on your term as WCC president?

I would be very willing to reach out to groups to discuss this. But to be honest with you, most of these diaries are really aimed at smearing me. I give credit to the Jewish newspaper of South Africa – they actually took the time to ask me for a comment. Unfortunately, they ended the article by quoting a Zionist Christian, a conservative Christian, who crushed me again. But I expected it, because it’s a big problem in terms of Israel-Palestine.

The WCC has made very strong statements regarding Israel and Palestine. My position does not necessarily contradict what the WCC has said over the years.

There was a debate about whether the WCC should expel or suspend the Russian Orthodox Church. The current Secretary General has indicated that he would not support such an approach. Would you?

The war in Ukraine and Russia is obviously sad and unnecessary. No one can really tolerate any kind of war for any reason. The WCC has spoken out on this. Personally, this will be my point of view.

But in terms of suspending the Russian Orthodox Church: suspending a church, any church, should be one of the last resorts.

RELATED: Will the World Council of Churches expel Kirill? We speak with Bishop Mary Ann Swenson

What would you like people to understand about the work of the WCC?

(The WCC has) been accused of not playing an adequate role by people in a particular context. … Also, unfortunately, there are some people – some Christians – who come from a very strongly conservative and right-wing outlook who view the WCC as a political body. They tend to demonize him, as if he never does God’s will in the world. This is a total misconception.

But I think if they can see that the WCC has been willing to get its hands dirty, willing to talk about the tough issues, and willing to really understand what God is telling us as Christians, then they will see a new appreciation for the WCC .