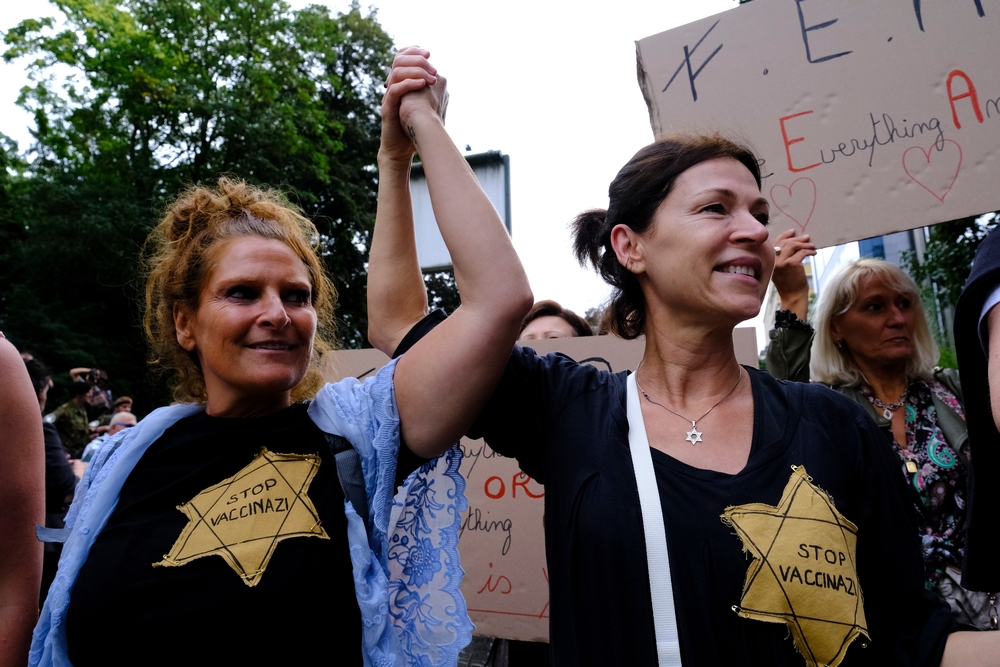 (January 7, 2022 / JNS) “How can we as a society just sit back and watch people die when a single gunshot could prevent a deadly disease? That was the agonizing question posed by a group of nine Minnesota health care providers who last weekend made the unprecedented decision to release an advertising in the local media begging people to get vaccinated.

Along with their advocacy, there was a stern warning about the strains – mental, physical, infrastructural – on health workers and their institutions who have resisted the COVID-19 pandemic for two years now. “The care in our hospitals is safe, but our ability to provide it is threatened,” the ad says. Heart attacks. Car crashes. Cancer. Stroke. Appendicitis. Now a disturbing question looms: will you be able to get care from your local community hospital without delay? uncertain.

The health care crisis that has unfolded in Minnesota comes despite more than 66% of state residents being fully immunized, placing Minnesotans firmly in the top half of the United States’ national immunization chart . In 17 states, the vaccination rate is well below 60 percent, while in three others – Wyoming, Alabama and Louisiana – less than 50 percent of the population has been completely stung. There is no doubt that tensions are felt at the national level, and that desperation among health workers is evident; depression, exhaustion and PTSD are unfortunately commonplace among clinicians and nurses.

The social costs of the ongoing pandemic are just as acute, in large part because proponents of vaccine denial have adopted the victim mantle and falsely claim they are discriminated against. Many cities and countries now require some form of vaccination passport, which may mean that for public health reasons, those who refuse the vaccine are no longer eligible for certain jobs, cannot travel on public transport, cannot enter restaurants, cinemas and other places of entertainment, and so on.

As many Jewish communities discovered to their dismay, these restrictions resulted in obscene comparisons to the plight of Jews under the Nazi regime. From Alaska to Austria over the past 12 months, we have seen protesters refusing vaccination donning concentration camp uniforms with the Judenstern (“Star of the Jews”) and carrying placards with slogans such as “Vaccination sets free”, a variation of the slogan “Work sets free” at the entrance to Auschwitz. The flip side, of course, is that when they don’t own the Holocaust, there is a trend among vaccine refusals and other pandemic conspiracy theorists to blame COVID-19 on “the Jews. “- as David Bateman, founder of the billion – Utah dollar software company Entrata did last week.

Successive studies have shown that more than 75% of the American population must be vaccinated to achieve herd immunity against COVID. Right now, our nationwide vaccination rate is just under 62%, which means the pressure on the hospital system will continue to mount as the latest highly transmissible strain of the coronavirus, Omicron , can only be considered as benign or not lethal. in vaccinated people. Hence, the passionate appeals in Minnesota that echoed across the country urging those who are not vaccinated to do the right thing.

Will an attempted call to action through a call to conscience have the desired effect, two years after the start of the pandemic and almost a year since vaccines became available ? Many observers regret that this will not be the case and that a decidedly lower approach should be tried.

This approach would involve paying financial incentives – bribes, if you prefer – to those who are currently reluctant to get the vaccine. As radical as this idea is, some variations of it have already been rolled out by some state and national governments and by private companies. In Baltimore, officials who can show they are fully immunized by Jan. 14 will receive a one-time payment of $ 1,000. In New York City in December, a booster shot at licensed clinics came with a $ 100 reward. There was a similar deal in Louisiana during the same period, with 34,000 vaccinated patients reportedly given a $ 100 gift card as a reward for taking the vaccine plunge.

Meanwhile, fully immunized Walmart employees are entitled to a $ 150 bonus. Further afield in Slovakia, a severely under-vaccinated central European nation, people aged 60 and over who get fully vaccinated will receive a cash reward of just under $ 350, thanks to legislation passed by the Slovak parliament in early December.

All of these examples I have cited represent just a handful of the various patterns that exist that link one form of payment to achieving immunized status. Even so, a national program that targets all unvaccinated people, regardless of their demographics, and offers the same amount of money to anyone who verifiably agrees to be vaccinated is nowhere to be found.

Perhaps this is because such a scheme carries enormous risks, especially for politicians who should explain and justify it. The objections are obvious. Is this to the right? Have we really fallen so low that we are now bribing those we fail to persuade? Is this fair? Why would we reward the recalcitrant while dismissing those of us who have freely done our civic duty? Could it even be job? Although there have been some encouraging small-scale studies of the effectiveness of payments, there is little overwhelming evidence to allow policy makers to conclude with confidence that a vaccination incentive would persuade the vast majority of refusals. to change your mind.

Yet some politicians, including former Democratic presidential candidates John Delaney and Andrew Yang, have advocated financial reward programs for those who get vaccinated for a year or more. Robert Litan, an economist at the Brookings Institution, argued at the end of 2020 that the sum of $ 1,000 would be a tantalizing reward, and that the roughly $ 250 billion that he thinks such a program could cost is a small price to pay. pay to reactivate our economy and cultural life. According to Litan, anyone who opposes such an idea “is indeed saying that it is better for the nation to continue to suffer from the fear and cost of the virus than to pay a small fee to end this national nightmare.” Designed as a cost-benefit assessment, payment, if necessary, is a matter of course. “

While I do not share this confidence in a payment system for vaccines, I reluctantly concluded that a larger and aggressively marketed program nationally offering a significant financial reward in return for immunized status is worth it. worth it, if you will excuse this terrible pun, a shot.

This is because the costs of allowing this pandemic to drag on outweigh any discomfort with the admittedly immoral act of resorting to legally sanctioned corruption.

There are millions of people with long-term illnesses and conditions far more serious than COVID-19 whose treatment is in jeopardy due to the demands of the pandemic. Moreover, the poisoning of our society’s discourse with pseudo-scientific pretensions and conspiracy theories – often rooted in medieval prejudices about Jews – destroys trust in education, in government and worse, in the world. ‘other.

These anti-Semitic biases will of course persist long after COVID-19 has been banned, but they will be much less virulent under conditions where a pandemic is no longer raging. If ending the collective misery the coronavirus has inflicted on us is our top national priority, we should be prepared to do the unthinkable.

Ben Cohen is a New York-based journalist and author who writes a weekly column on Jewish and international affairs for JNS.

“12 angry men” remember – and not a moment too soon

A look at the future of art restitution