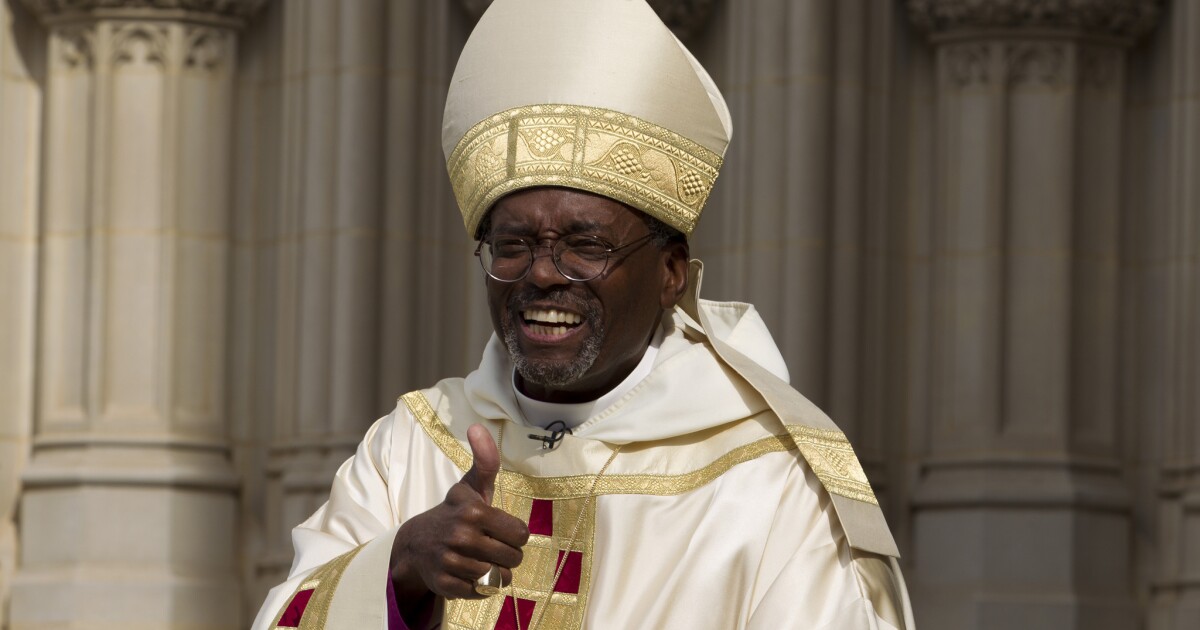 Michael Curry, Presiding Bishop of the Episcopal Church, on reconciliation, healing and hope

It took about 10 minutes for the chosen ultimate frozen to thaw. The royal audience at Prince Harry and Meghan Markle’s wedding actually laughed – a little.

Then there was more laughter. No more nodding heads. More complicit smiles.

After Bishop Michael Curry left the pulpit on that day in spring 2018, many in attendance – and the nearly two billion viewers – discovered what many of us on this side of the pond already knew. : Presiding Bishop of the Episcopal Church is one of the best preachers of his generation.

Media critics cemented the verdict for this son of an Episcopal priest and descendant of slaves.

“Knock down the house.”

Readers will soon have the opportunity to sample many of Curry’s most recent homilies, thanks to a new book featuring sermons delivered during the first year of the COVID-19 pandemic in Washington National Cathedralseat of the Episcopal Diocese of Washington and spiritual beacon for many American worshipers.

“Reconciliation, Healing, and Hope: Sermons from the Washington National Cathedral,” scheduled for February 22, includes five of Curry’s sermons, plus dozens more delivered by an array of speakers who sought to bring comfort to thousands of worshipers who had turned their couches into pews.

The book was inspired by the cascade of cards and letters thanking the cathedral for these sermons, a sentiment reinforced by a survey of new supporters who highlighted the importance of this preaching.

So how does he do it? What’s the magic formula for weaving the right words together to persuade and inspire hearts and minds in 20 minutes or less?

The 68-year-old prelate, the first African American to lead the Episcopal Church, says he begins with a question: Who is the audience and what do they need?

“What is the deep longing of the human heart that brings us together at this time?” he told me in an interview from Pittsburgh, where he was in town for a funeral service.

Then comes the challenge of making the message relevant to the world outside the walls of the church. For that, he turns to the late theologian Karl Barth, who taught that preachers should hold the Bible in one hand and a newspaper in the other.

Consider this excerpt from the first sermon of the book. Like other places of worship across the country, the National Cathedral had been closed by the pandemic and uncertainty reigned. Then, just days before he was due to preach, George Floyd was killed by a Minneapolis police officer as the world watched.

Curry had already written a very good sermon. He threw it away.

“To avoid it is to deny Christmas,” he says of that terrible scene and the fury it sparked. “Christmas is the coming of God into the world. It is not God who avoids it.

So he turned his attention to two pandemics plaguing this country.

Last week, we not only had to endure a pandemic caused by a virus – a viral pandemic – but we had to endure and deal with a spiritual pandemic: the roots of self-centeredness, where a person can look at another person and despise them and reject them, and don’t even consider them a child of God.

We have once again seen the unthinkable become thinkable. It caused great pain or, better said, increased the great pain that was already there…

There is a part of us that just wants to give up and, in the words of the psalmist, cry out: until when? How long, Lord? How long? And yet, we are not victims of fate. We are people of faith. We are not doomed and condemned to perpetuate our past in our present and our future.

We must not be slaves of fate. We follow in the footsteps of Jesus. This Jesus taught us that love will bring us out of nowhere. He taught us that sometimes you have to take up the cross and follow in his footsteps and that if you dare to follow his path of love, you will find God’s path of life.

Curry isn’t afraid to put herself in the sermon — or her whole body. His hands, arms and facial expressions are extensions of his words, punctuating, cajoling, imploring. Its cadence is sometimes lyrical, repeating phrases and words like a composer’s rhythmic refrain.

He credits a parish he served early in his career, where the faces he looked at each Sunday ranged from domestic workers who could or could not read to well-educated professionals.

“They made me learn to preach and use everything I really could, including myself, to deliver that message to a diverse group of people with different levels of education, different life experiences,” says- he.

She was one of those domestic workers who became a Sunday morning compass for getting things right.

When asked why he often makes the message personal, he quotes Phillips Brooks, an Episcopal priest perhaps best known for his Christmas carol, “O Little Town of Bethlehem”, who described preaching as the communication of truth through personality.

“You don’t need too much of the person because the sermon isn’t about you,” Curry warns. “But being authentic means it has to be the communication of truth through you, through lived experience.”

It can be as simple as customizing a researcher you’re about to cite. Or as complex as putting a human face to the golden rule.

I was probably 16 or 17 years old. I was getting ready to go to college. I was in the car with my dad, and he told me something he told us growing up. He said, “When you get to college, you treat every girl like you would want someone else to treat your sister.” I remember thinking, ‘Man, you just ruined all the dreams I had for college.’

Show them the same love, honor, care, dignity and respect that you would want for your own. “Do unto others as you would have them do unto you.

It’s not rocket science, but it changes the world. He said, “If we did this, if we did this, then every child would have access to quality education. If we did that, then there would be justice and equality for everyone in this country and around the world.

His attempts at persuasion are sometimes accompanied by a spoonful of confession. When the mask war broke out, he admitted it was no fun to wear the face mask. But he wears it anyway.

It’s a small sacrifice, he added, “that can actually be a symbol of what it means to love.”

Sharing your own reluctance can make you vulnerable, he admits, but it also makes you authentic.

A Chicago native who grew up in Buffalo, Curry has been an Episcopal priest since 1978, the same year he earned his master’s degree from Yale University Divinity School. He served churches in North Carolina, Ohio and Maryland before being elected bishop of the Diocese of North Carolina in 2000.

Fifteen years later, he was elected presiding bishop, becoming president and CEO of a leading Protestant denomination that operates in 17 countries and has more than 1.7 million members. The Episcopal Church is a member of the worldwide Anglican Communion.

Curry had already distinguished himself as a champion of civil rights, women’s ordination, and LGBTQ equality — with something you’ve probably learned by now: an unwavering belief that God is love.

This love remains his epicenter.

“I’m telling you, that’s the key to any kind of preaching,” Curry says, with more than a little excitement. “You can do it in two minutes or you can do it in 15 minutes. But do it.

He mentions the biblical story of Lazarus, who was brought back to life from his own tomb by Jesus. When Jesus noticed that Lazarus was still wearing his burial cloth ties, he called someone to untie him and let him go.

“Untie the preachers,” Curry says, “and let them become the vessel, the instrument of God’s love, flowing through them and communicating with others.”

He’s warming up now, leaning closer to the Zoom camera as he speaks.

“That’s when the sermon takes place. And this is how preaching comes to life. And he is vulnerable. It’s risky. It is not acting.

If COVID-19 doesn’t cause another postponement, people here will have a chance to hear Curry up close and personal later this year, when he’s the guest speaker at a “Festival of Good News” hosted by the Episcopal Diocese of San Diego on December 9 and 10 at the Town and Country Resort Hotel (Details: thegoodnewsfestival.com).

You can bet he will conjure up the word love.

“I am convinced,” he told me, “that the decision to live the path of sacrificial love will be the decision that will make or break us.”

Allow me to conclude. A few years ago, I was listening to public radio on a Sunday afternoon, probably in the summer. I suspect I was on vacation. There was a program about a man named Norman Gershman, who had recently published a photo essay and released a documentary about Muslims in Albania…

As the Nazi armies advanced towards the small country of Albania, messages were sent by couriers to the Albanian Foreign Ministry. “You must identify all Jews living in Albania, provide their addresses and any contact information.”

It turns out that the foreign minister of Albania was a Muslim, a member of this small community. And in the mind of Harriet Tubman, he organized an Underground Railroad, if you will. He sent a message to the little — I want you all to hear me — to the little Muslim community in Albania.

He said, “The Jewish people must be your people. They must live in your homes. They must sleep in your beds. They must eat at your tables. You should treat them like your own family, because that’s what they are. And the Muslim community in Albania saved 2,000 Jews from the Holocaust.

Dolbee is the former religion and ethics editor of the San Diego Union-Tribune and a past president of the Religion News Association. Email: [email protected]