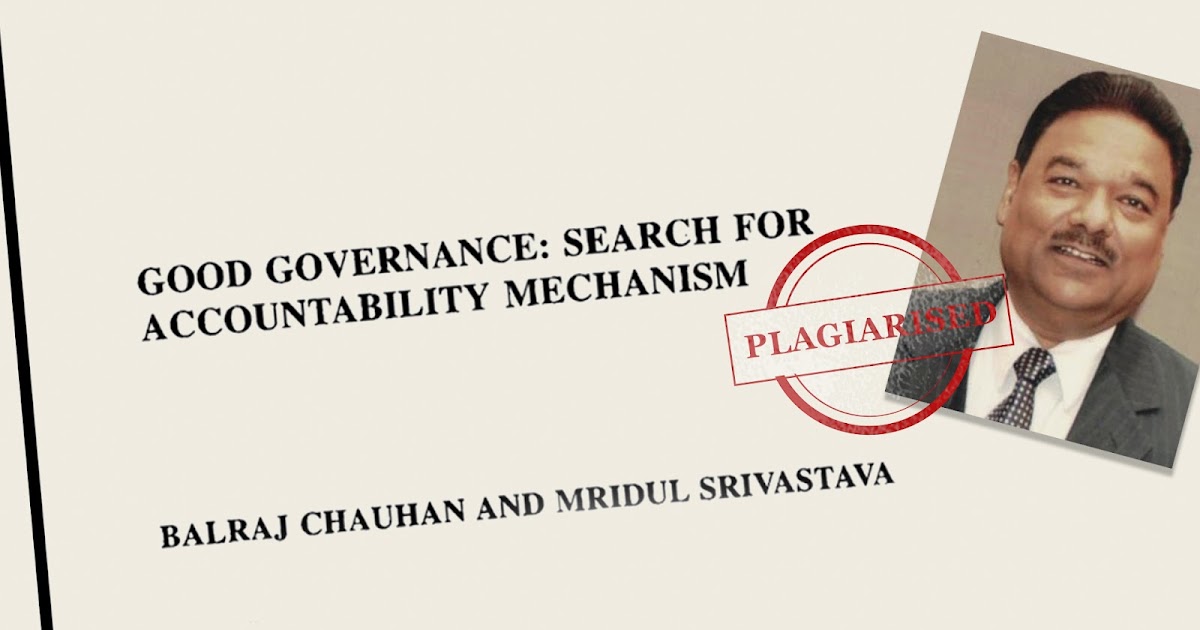 Several sections of an article co-authored by Balraj Chauhan, a member of the Interior Ministry’s Committee for Criminal Law Reforms, are plagiarized. The article, titled â€œGood Governance: Search for Accountability Mechanism,â€ was published in the Indian Journal of Public Administration in October 2011.

Chauhan was the vice-chancellor of the Dharmashastra National Law University in Jabalpur, Madhya Pradesh until mid-June of this year. Chauhan’s co-author Mridul Srivastava is Deputy Registrar at Dr Ram Manohar Lohiya National Law University in Lucknow. The IJPA is a peer-reviewed journal of the Indian Institute of Public Administration, which describes itself as an autonomous academic institution. Chauhan and Srivastava’s article is just over 4,500 words long. Of these, at least 3,500 words had already appeared in other publications, written by other authors, and only just over nine hundred words appear to be original.

The CRCL is a committee that the Home Office has established to review India’s criminal laws. On its website, the committee states that it “endeavors to recommend reforms” of Indian criminal laws “in a principled, effective and efficient manner”. However, lawyers, activists and academics criticized the committee’s constitution because it was not representative of the country and did not include members of Dalits, Adivasis or other marginalized communities.

Chauhan’s article reproduces large sections of a 1999 article by Ngaire Woods, an academic who at the time was a lecturer in international relations at the University of Oxford. Woods is currently the Dean of the Blavatnik School of Government in Oxford. His article, titled â€œGood Governance in International Organizationsâ€, was published in volume 5 of the journal â€œGlobal Governanceâ€ in its January-March 1999 issue. Chauhan’s paper uses entire sections of Woods’ paper without quote or credit it.

In fact, Chauhan’s article does not contain any citation in the body of the article. However, Chauhan’s article has a list at the end titled “A Select Reading,” which mentions another Woods article. Chauhan’s article says: “The article here is based on research conducted for the Group of Twenty-Four and published under the title Ngaire Woods, Governance in International Organizations: The Case for Reform in the Bretton Woods Institutions UNCTAD / Group of Twenty-Four International monetary and financial questions for the 1990s. Volume IX (Geneva; United Nations, 1998). This phrase also appears to be copied exactly from a quote at the end of Woods’ 1999 article, which referred to his own past work.