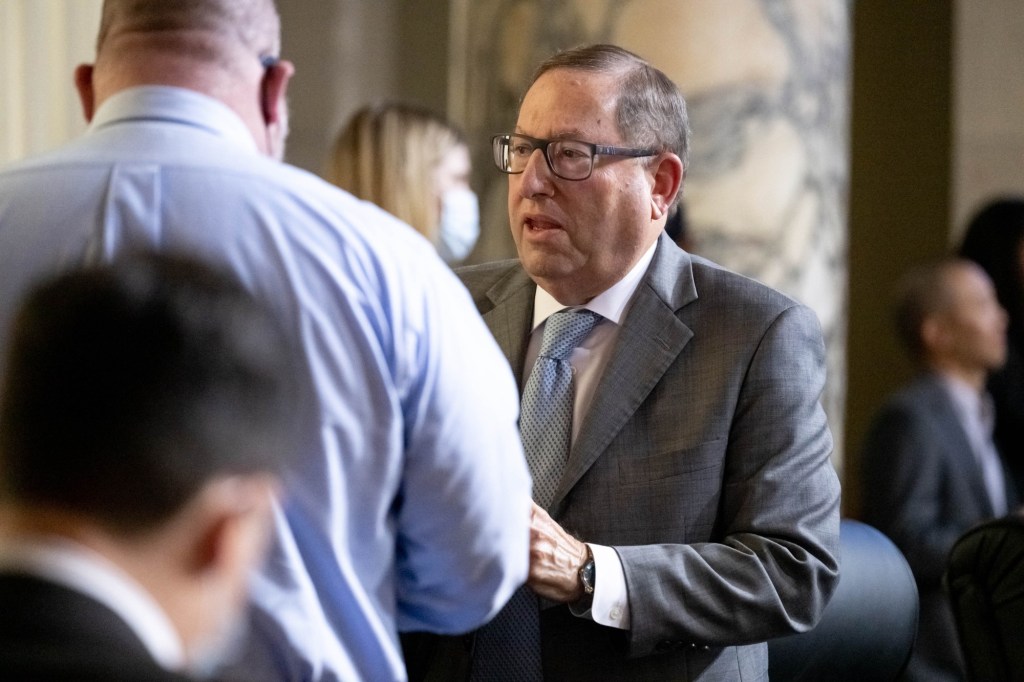 The Los Angeles City Council on Tuesday (November 1) adopted a definition of “anti-Semitism” to help city officials, city employees and contractors better understand what anti-Semitism looks like following incidents recent hate speeches, including the laying up of antisemitic banners on highway 405 two weekends ago and racist comments in an audio leak of a conversation between some city council members.

Also on Tuesday, the council took its final vote on an ordinance prohibiting pregnancy service centers from providing false advertisements and misleading information to pregnant patients about their options, including abortion. In addition, a council member reintroduced a motion to consider creating an anti-corruption office following the latest of several scandals at City Hall.

The most recent scandal, in which three current and former council members were heard in a Secret recording 2021 making racist comments while attempting to manipulate the city’s redistricting process last year, continued to bring protesters to City Hall this week to demand the resignation of city councilors Gil Cedillo and Kevin de León for their role in the incident.

Tuesday’s council meeting was briefly delayed at first when rowdy protesters once again called for councilors to resign and disrupted proceedings with noisemakers and chants. They were ordered to vacate the room and left without incident after around 10 minutes as around 20 police, many in riot gear, stood around the council chamber and some led the protesters away towards the exit.

Another day at the town hall. The rowdy protesters were pushed/out of the hall by the police when they began to disrupt the start of the meeting. Some officers, standing, were in riot gear. No physical confrontation. The whole thing lasted about 12 minutes. pic.twitter.com/P9FBnzTo5K

After council members returned to the room to resume the meeting, they heard about two hours of public commentary before voting unanimously to accept the International Holocaust Remembrance Alliance’s definition of “anti-Semitism.”

The IHRA defines anti-Semitism as “a certain perception of Jews, which may be expressed in hatred towards Jews. Rhetorical and physical manifestations of anti-Semitism are directed at Jewish or non-Jewish individuals and/or their property, at Jewish community institutions and religious establishments.

The definition is not legally binding, but supporters of the council resolution said it was essential for the city to speak out against anti-Semitism when it occurs. The definition has been adopted by 37 United Nations countries, including the United States, as well as 22 US states and several cities, including Beverly Hills and West Hollywood.

Councilman Paul Koretz, who drafted the resolution, said anti-Semitism is not always overt and may look different today than when his father fled Nazi Germany. But, he said, “the Nazis did not call themselves anti-Semites, and those who engage in modern forms of anti-Semitism are no different.”

Matthew Friedman, senior associate regional director of the Anti-Defamation League Los Angeles, which spoke in support of Koretz’s resolution, said hate crimes against Jews were on the rise in Los Angeles and nationwide. national.

“As our city reels from an increase in assaults, these heinous acts of harassment, vandalism and propaganda are all having a ripple effect, with the perpetrators seeking to strike fear not only in the Jewish community but in all marginalized communities,” he said. “This is something we cannot and will not tolerate.”

According to the resolution, the Anti-Defamation League counted 2,717 anti-Semitic incidents in the United States last year, a 34% increase from the previous year and the highest number since 1979, when the league started tracking such incidents.

The resolution also said the number of reported hate crimes statewide increased 32% between 2020 and 2021 and was at its highest level since 2001. Among hate crimes involving religious bias, incidents anti-Jews were the most common, with a 32% increase statewide. in 2021, he says.

While the vast majority of speakers during the roughly two-hour public commentary came out in favor of the IHRA’s definition of antisemitism, a few expressed concern that by adopting it , the city would stifle the free speech rights of individuals critical of the Israeli government.

Jeff Warner, coordinator of LA Jews for Peace, told the council that the IHRA’s definition of anti-Semitism “blurs the line between anti-Semitic speech and legitimate criticism of Israel and Zionism.”

“It sows confusion while delegitimizing the voices of Palestinians and others, including Jews like me, who are critical of Israel and Zionism,” Warner said. “None of this helps fight anti-Semitism.”

In the end, the council voted 11-0 to adopt the IHRA’s definition of anti-Semitism.

The council vote took place on the same day as the Riverside County Board of Supervisors voted to approve a resolution denouncing anti-Semitism.

Also on Tuesday, the LA City Council took its final vote on an ordinance prohibit pregnancy service centers from providing misleading or false information to the sick. The vote was 11-0.

The order – a response to the Supreme Court’s overturning of Roe v. Wade, who had offered a federal constitutional right to abortion – means the Los Angeles City Attorney’s Office can now issue fines of $10,000 per violation and allow victims to sue if they believe that they were misled about their options.

“Crisis pregnancy centers often try to lure pregnant Californians into their facilities through vague statements about the information and services they offer,” Bonta said at the time. “While crisis pregnancy centers may claim to offer comprehensive reproductive health care services, their mission is to discourage people from accessing abortion care.”

On Tuesday, City Attorney Mike Feuer said the issue “is so big right now” because states across the country are limiting or banning the right to abortion. He cited a UCLA study that said thousands of women are expected to travel to Los Angeles “to seek to exercise their full range of reproductive choices.”

“When they come here, they need to get accurate information so they can make the choice they want to make for themselves,” he said.

Instead, he continued, some crisis pregnancy centers falsely advertise that they provide abortion services or referrals. Then, when a patient comes, the staff at the center tries to dissuade the woman from having an abortion.

“Here’s the thing: We all know that women faced with this most sensitive, difficult, personal question don’t have a second to waste,” Feuer said. “Every moment matters because it affects the choices they can, in fact, make.”

The City Council also voted on Tuesday to reconsider creating an Anti-Corruption and Transparency Office in response to the City Hall racist scandal that led to the resignation of City Council Speaker Nury Martinez. .

Council initially considered creating the office in 2020, but the motion lapsed after council failed to act for more than two years.

This week, Koretz introduced a motion to reactivate the process, following the latest City Hall scandal.

The original motion was put forward by former Councilor David Ryu, who at the time quoted a an in-depth investigation by the FBI and the Department of Justice into corruption around real estate development and abuse of land use power. This investigation led to the arrest of city councilors Jose Huizar and Mitch Englander.

Ryu’s motion focused on oversight of land-use planning and building processes and approvals, but Koretz on Tuesday introduced an amendment aimed at potentially expanding the office’s reach to other areas such as ethics. .

The proposal will be reviewed by the new ad hoc committee on municipal governance reform.