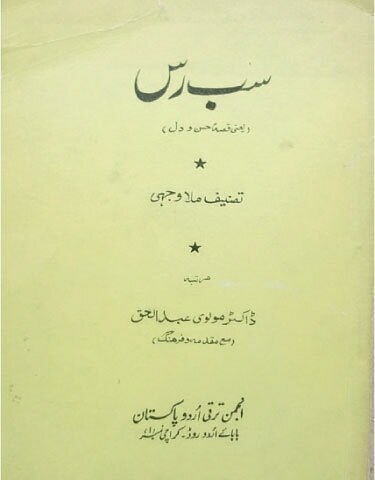 No matter how strange it may sound, the fact is that although Urdu originated in northern India, its first written literary pieces, whether in prose or poetry, were created in the south. from India.

The word ‘Deccan’ literally means ‘south’ and Deccan is credited as the birthplace of the earliest Urdu literary plays. The very first literary work written in Urdu – i.e. discovered so far – is Masnavi Kadam Rao Padam Rao, according to research studies. It was written between 1430 AD and 1435 AD by Fakhr Deen Nizami, in Deccan. Based on Hindu mythology, Kadam Rao Padam Rao addresses mystical issues in a figurative sense.

But it took about 200 more years for Urdu prose to develop: the first literary work in Urdu prose is Sabras and it was written in 1635 – in the Deccan. At that time, Abdullah Qutb Shah ruled Golconda, Deccan. At his command Mulla Asadullah Wajhi (1580-1640), a poet of his court, wrote Sabras, which is an allegorical tale which apparently describes the struggle between husn (beauty) and ishq (love). But he also has some subtle ideas.

Since Sabras is an allegory, its characters and even its places are the symbolic representation of a deeper meaning. Certain abstract qualities, such as love, wisdom, courage, and honor, are personified to convey Sufi moral values ​​and thoughts. The basic theme of Sabras is the search for aab-i-hayaat, or elixir of life, which is eventually found with great difficulty and struggle, not to mention many plot twists.

According to Wajhi, aab-i-hayaat is nothing, as explained at the end, but an utterance or speech, say, a spoken word. But Wajhi was unable to explain this as explicitly as Fattahi Nishapuri did in his Persian work, the original tale on which Sabras is based, says Moulvi Abdul Haq. He was the first scholar to edit and publish this centuries-old work, adding some 50 years to the history of Urdu literature, which was further pushed back by Jameel Jalibi when he discovered and published Padam Rao Kadam Rao .

As discussed by Moulvi Abdul Haq in his introduction to Sabras, published by Anjuman Taraqqi-i-Urdu in 1932, Wajhi borrowed the idea from Husn-o-Dil, or beauty and heart, a mystical and allegorical prose tale written by a 15th century Persian poet Muhammad Ibn-e-Yahya Sibak Fattahi Nishapuri.

Fattahi had written this tale in verse form as Dastoor-i-Ushshaaq in 1436. As Jameel Jalibi says, it became so popular that Fattahi rewrote it in ornate prose and then presented it again in another of his works Shabistan-i-Khayal in 1439. He even inspired some Turkish poets to reproduce it. Some 400 years later, Shabistan-i-Khayal has also been translated into English and German.

So, no wonder it inspired Wajhi and he wrote the story in Urdu prose, closely following the original story. But nowhere did Wajhi mention Fattahi’s work and claim to be the origin of the story. But Wajhi must be credited with writing the first prose literary work of Urdu because before him all Urdu had in prose was religious works or treatises on Sufism and they lacked literary touch.

The language used in Sabras is now almost 400 years old. Its spelling is very different from what we are used to seeing today and one reason is that in the Deccan many Urdu words were pronounced slightly differently. Secondly, some words used in the tale are strange as they originate from languages ​​spoken in Deccan, particularly Telugu, and are not part of the standard Urdu vocabulary. Interestingly, words of Persian origin as well as local or Hindi words worked their way into this vocabulary side by side, giving significant clues to local culture and societal trends.

Sabras is in prose but the reader often comes across sentences ending in rhyming words as was in vogue at the time. Despite a language that seems a bit unfamiliar today, the tale is readable, and an occasional aphoristic expression illuminates the text with laconic truth. Considering the time in which Sabras was written – some 400 years ago – Wajhi deserves all the kudos for writing a language that was not only considered Standard Urdu at the time, but was valued for its literary merits and which is understandable even today except for the words of the local Deccani dialects.

Jameel Jalibi highly praised Wajhi not only for the historical significance of Sabras but also for Wajhi’s ability to transform Deccani Urdu into a literary Urdu that served as a model for generations of writers. Jalibi rightly pointed out that Sabras’ writing was a turning point in the history of Urdu prose.