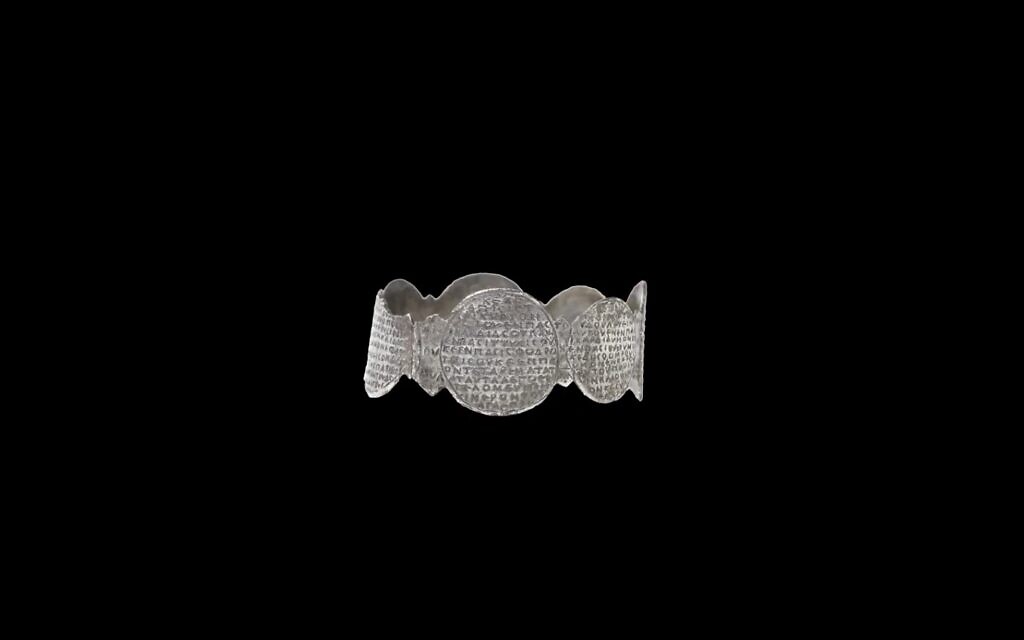 The words of the Shema prayer, arguably the most fundamental liturgical statement in Judaism, are generally not associated with the art of magic.

But the arrival of a 1,500-year-old silver armband bearing some of the words from the Jewish text led a member of the Israel Museum’s archaeological staff to some startling discoveries about the Shema and its protective qualities.

The finds and artifacts are on display in “Hear, O Israel: The Magic of the Shema,” on display in the museum’s archeology wing until April 2022.

The large, durable silver cuff covered with Greek writing was part of a bequest of artifacts that arrived at the Israel Museum several years ago.

Employee Nancy Benovitz, who studied Greek archeology and typography, jumped at the chance to translate Greek writing and ended up co-organizing the Shema exhibit with the chief curator of the wing of archeology, Dudi Mevorach.

Benovitz deciphered the Greek text in two years and discovered that it was the Shema, the Jewish statement of faith taken from the Bible, recited twice a day in prayer and handwritten on the scrolls inserted in the mezuzah cases. and speech bubbles.

A magic bowl exhibit, from “Hear, O Israel: The Magic of the Shema,” a new archaeological exhibit at the Israel Museum which closes in April 2022. (Courtesy Laura Lachman)

Before they became a prayer, the three separate paragraphs of the Shema were words conveyed by Moses to the people of Israel, found in the biblical books of Deuteronomy and Numbers. They were brought together during the Second Temple period to form the text of the Shema which is known today, which has become a central part of morning and evening services and which many have memorized and recited before sleeping and in times of fear and anxiety, including before death.

The exhibition opens with a presentation of the headline and its inscription, which Benovitz has carefully translated over two years. She first noticed the repetition in the letters and recognized several key words from the Shema, which helped her complete the study.

Part of the puzzle for Benovitz was why an amulet, which tended to represent white magic and protection and was generally used by Christians, carried the words of the Shema.

“It was totally unique,” ​​said Benovitz.

She ultimately concluded that the inscribed armband was a Jewish version of a Christian amulet, likely owned by a wealthy Jew living in a Greek community, possibly in Egypt, with access to a now lost translation of the Bible that his community was using. – and he put the words of the Shema on his amulet.

From there, the exhibition shows other amulets used and created by the early Jews. One is a small gold plaque with the Shema written on it in small Greek letters. It had been rolled up and folded into a tiny silver capsule, and was found in the grave of a baby who was discovered during a search.

Amulets were used as jewelry in the ancient world and are also used in the modern world, from Yemen, Iran and Israel. There are also amulets made by Christians, some with the Shema engraved on their underside: ancient magic bowls, from a Babylonian custom in which the bowls were inscribed with biblical quotes and demons, then buried near the front door, to ward off evil spirits. from home and family.

Could mezuzah cases and phylacteries be considered amulets? Excerpt from “Hear, O Israel: The Magic of the Shema”, a new archaeological exhibit at the Israel Museum which closes in April 2022. (Courtesy of Laura Lachman)

There is no magic per se in Judaism, said Benovitz, but there are elements that appear in these bowls, books and scrolls, in which the verses are alternated and repeated, or in which the words are manipulated. or written backwards.

“These are things that evoke Harry Potter,” Benovitz said.

The exhibit includes birth amulets illustrated with the figure of the mythological Lilith and other demons, as well as illustrated manuscripts for the birth bed, including the text of the Shema that the giving birth mother must recite.

The punchline comes at the end of the exhibit, said Benovitz, with display cases of speech bubbles and mezuzah cases, which traditionally contain a tightly rolled piece of parchment inscribed with the Shema, and which also echo the amulets.

“Intuitively, we kind of know,” Benovitz said. “They kind of overlap.”