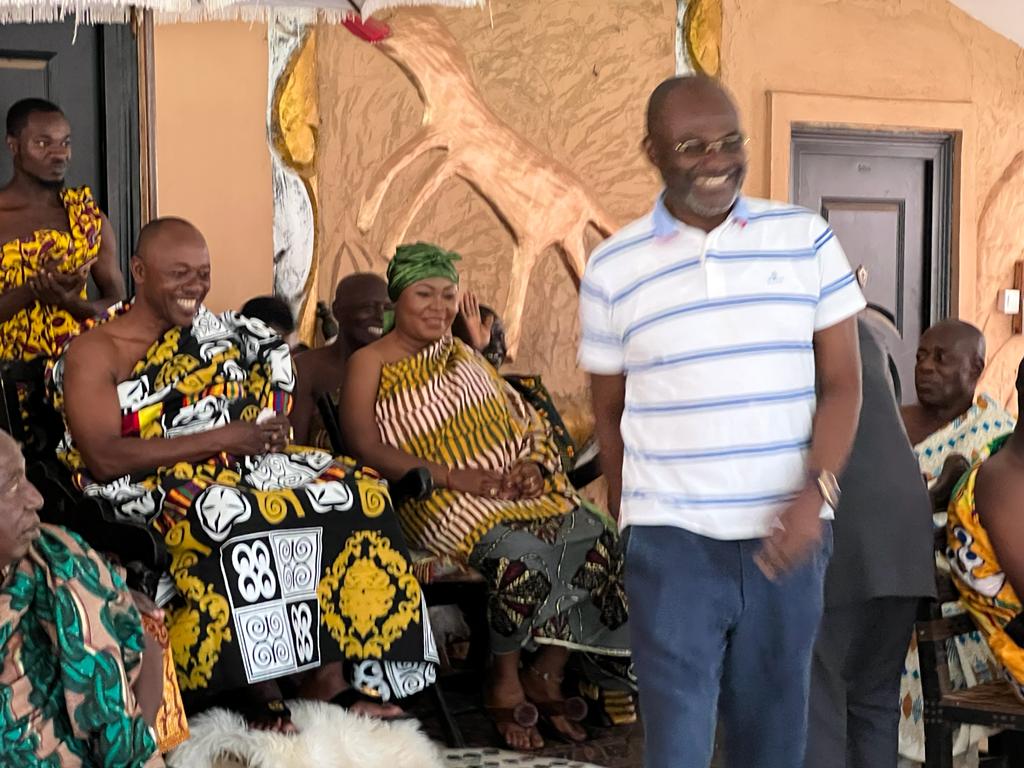 Assin Central MP Kennedy Agyapong has reaffirmed his decision to contest the post of flag bearer of the New Patriotic Party (NPP), with assurances of tackling head-on the challenge of unemployment in the country.

Agyapong said he would prioritize job creation to tackle the youth unemployment challenge facing the country.

He noted that as someone who currently employs 7,158 workers across the world, he was in a better position to create employment opportunities for young people.

*Courtesy call*
The MP for Assin Central gave the assurance when he paid a courtesy call on the Paramount Chief of Tepa, Nana Adusei Atwenewa Ampem I, at his palace in Ashanti region.

The MP was accompanied by a delegation from his campaign team.

He took the opportunity to inform the leader of his intentions to challenge the NPP’s standard-bearing position.

“I have plans to create globally competitive industries, to make commercial agriculture attractive like what is happening in Côte d’Ivoire and other industrial countries. Tourism will be done to attract more customers as part of measures to reduce poverty to the bare minimum in the country,” he said.

He added that he would not only transform the country through discipline and the fight against corruption, but also give hope to the hopeless and a voice to the voiceless.

*virtues*
The MP said his leadership would be based on the virtues of patriotism, honesty and discipline as well as the recognition of traditional leaders.

“These three virtues are the mark of success. We need patriotic citizens, honest citizens and disciplined citizens to develop Ghana. Ghana can be made like Dubai. Poor Assin Dompim, I now have a successful life,” he said.

He told the Chief that he would use his salary and allowances to establish a scholarship program to provide higher education to the less privileged people in society.

“I will not take a salary. It will be used as a scholarship to pay the expenses of the poor, and I believe it will bring the change that Ghana needs for accelerated development,” he said.

Mr. Agyapong thanked Nana Adusei Atwenewa Ampem I for the immense support the government has received over the years from the traditional rulers of Tepa.

He assured the leader and his subjects of the party’s continued collaboration with traditional leaders and religious authorities to promote national development.

*Answer*
Nana Adusei Atwenewa Ampem I, thanked the MP for his visit and assured him of a warm welcome at all times.

The leader urged him not to give up his boldness after the victory to get the party to iron out any differences that may arise in the primaries and unite with the party base to break the eight-year jinx of governance in the 4th Republican. political dispensation.

“You have my support. Work extremely hard improving the basic party structure. Work with traditional leaders and most importantly make sure the government is focused on eradicating poverty, creating jobs and building roads,” the chief told the delegation.

The leader observed that hard work, love, unity and grassroots involvement remained the only sure way to keep the NPP in power.

He also encouraged Mr. Agyapong to never neglect the truth and honesty that endeared him on his journey to the presidential standard bearer.

The Tepahene believes in his vision and his experienced entourages, and expressed the certainty of the delegates’ votes for Kennedy.