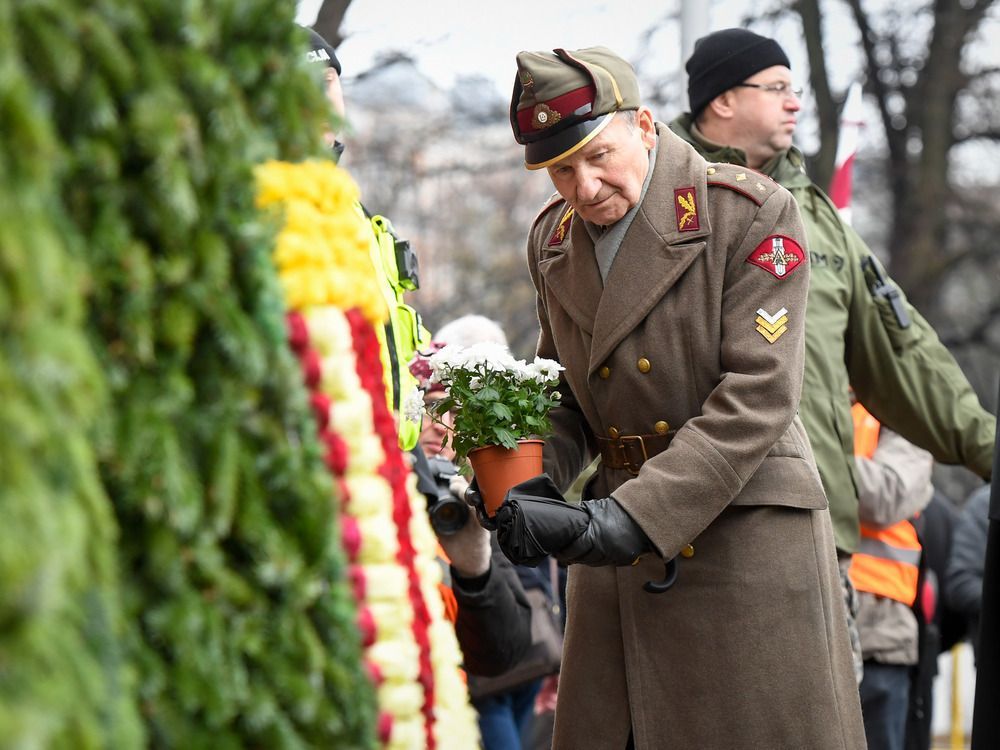 Jewish groups condemn a parade in Latvia to celebrate members of Adolf Hitler’s SS, warning that the continued glorification of the Nazis is not only wrong but could also be used for Russian propaganda.

The march in honor of the Latvian SS Legion has been a controversial annual event, but pandemic health restrictions have forced the celebration to be canceled for the past two years. Latvian TV reported it was back this year with several hundred people taking part in the parade in Riga on Wednesday.

For decades, Jewish groups have condemned the celebration and what they say is Latvia’s continued glorification of those who supported Hitler or took part in the Holocaust. There were also fears the parade could give Russian leader Vladimir Putin another example to drive home his propaganda message that NATO countries and Ukraine are harboring Nazis. Putin has already claimed that his army needed to invade Ukraine to “denazify” that country.

Marvin Rotrand, national director of B’nai Brith Canada, said Latvia continued to ignore calls for the parade to be closed. “They honor an SS unit whose members were involved in atrocities,” Rotrand said. “This year, in particular, there is an incredible lack of understanding of the damage that a march like this does to NATO unity and to nations that stand up for democracy.”

Over the years, Eastern European countries have erected monuments to nationalist leaders who fought against the Soviet Union in World War II, but many of those same leaders were Nazi collaborators and some actively participated. to the Holocaust. The Nazis also created SS units made up of men in Lithuania, Latvia, Ukraine and Estonia.

Holocaust scholars and Jewish groups note that the easiest way for Eastern European governments to counter Putin’s claims that they support Nazism would be to end such celebrations and remove monuments to collaborators.

But Latvian officials have redoubled their praise for the SS and say members of the legion are heroes who fought the Russians and have nothing to do with the Holocaust.

In 2019 Latvian Defense Minister Artis Pabriks called SS members “the pride of the Latvian people and the state”. Pabriks also called out those who condemned the parade, adding, “It is our duty to honor these Latvian patriots from the depths of our souls.”

In early 2019, however, Global Affairs Canada denounced the annual March 16 parade. Amy Mills, spokeswoman for the department, said Canada was “firmly opposed to the glorification of Nazism and all forms of racism, racial discrimination, xenophobia, intolerance and extremism”. This is why we condemn the parade commemorating the Latvian SS brigade held in Latvia on March 16.

This year, Global Affairs Canada has taken a less strident approach. He did not mention the Nazis, or specifically denounce the parade. “Canada has always supported the freedom and independence of Latvia and condemns those who would appropriate these sentiments to promote hatred, extremism and division,” ministry spokesman James Emmanuel Wanki said Thursday. , in an email. “To our knowledge, these events are neither sanctioned nor monitored by the Latvian government.”

The Canadian Forces have approximately 540 soldiers in Latvia as part of a NATO mission. Prime Minister Justin Trudeau recently concluded a visit to Latvia and announced a further extension of the mission. His office noted that “the relationship between Canada and Latvia is rooted in our shared values.”

The Latvian SS Legion was made up of diehard Nazi collaborators who had taken part in the Holocaust as well as conscripts. Among the Legion officers was Viktors Arajs, the anti-Semite who liked to call himself “Arajs, the Latvian Jew-killer”.

Arajs once regaled guests at a dinner party in Riga with his views on the best method of killing Jewish babies, according to the book The Holocaust in Latvia. Arajs told his dinner attendees that he would throw the children in the air and then shoot them. This way he avoided the ricochets that could occur if he killed the babies on the ground.

Latvian television reported that the government had stepped up police presence at this year’s parade and that there were no incidents. Government officials have rejected a request to allow a counter-protest by those who oppose Nazi glorification.

The Latvian government and its supporters say those speaking out against the parade have been duped by “Russian disinformation”. The right-wing Macdonald Laurier Institute in Ottawa, which received funding from the Latvian Ministry of Defence, also claimed that some press articles depicting Latvian participation in the Holocaust and support for Hitler “essentially reproduced tailor-made narratives from the Kremlin”.

But Jewish groups have raised concerns that such statements aim to whitewash the Holocaust.

Dovid Katz, editor of Defending History, a journal devoted to Holocaust studies and the fight against Nazi glorification, said it was “utterly sad” that the parade had resumed in Riga. “That they receive the historic center of the capital again this year is madness fraught with poor judgment and even poorer ethics in an act of de facto state facilitation of a pathetic cult of Hitlerism” , did he declare.

Sign up to receive daily news from Ottawa Citizen, a division of Postmedia Network Inc.

Thank you for your registration!

A welcome email is on its way. If you don’t see it, please check your spam folder.

The next issue of Ottawa Citizen Headline News will soon be in your inbox.

We encountered a problem during your registration. Try Again

Half a million mourners attend funeral of rabbi in Israel