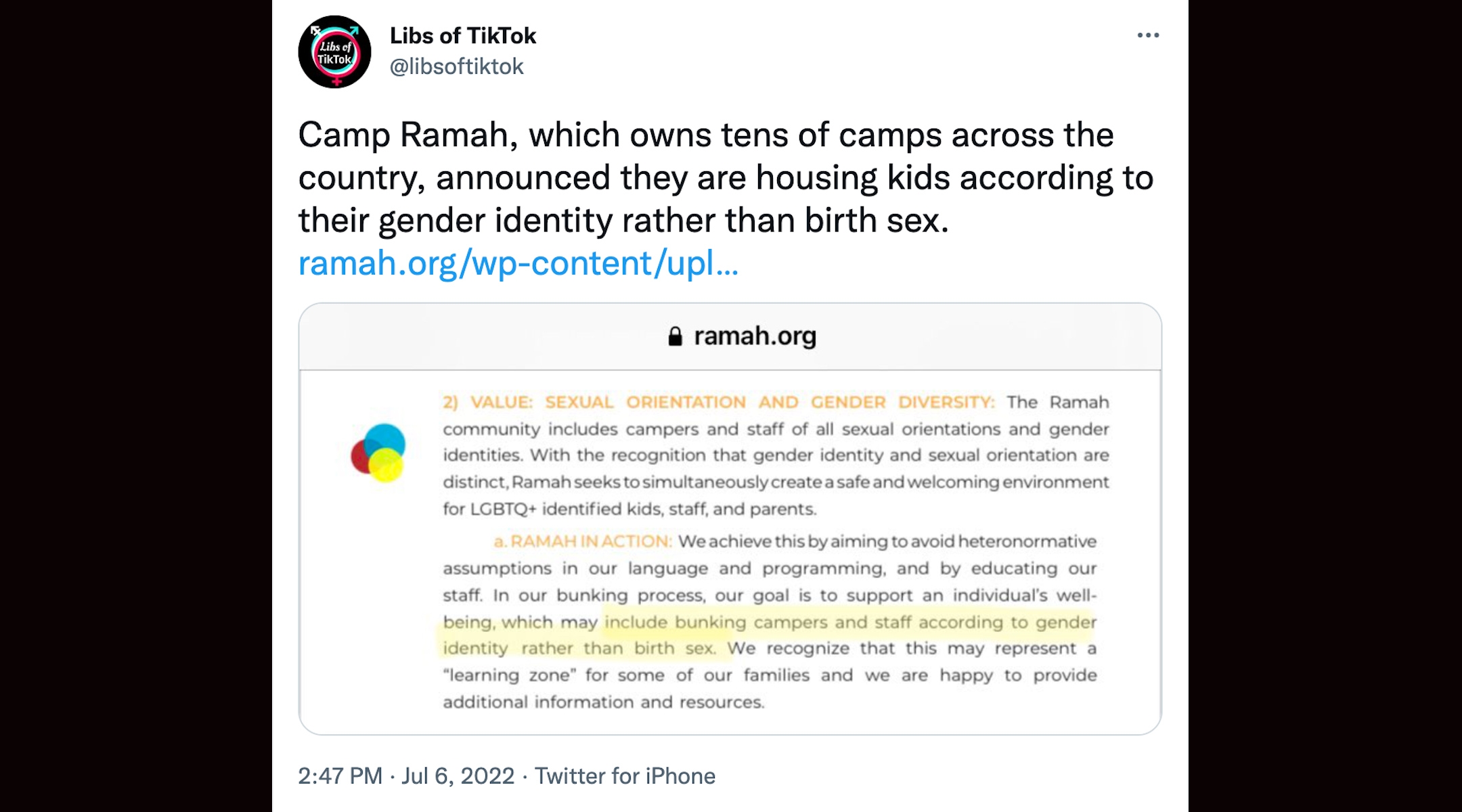 (JTA) — A Jewish summer camp in Southern California is reassuring families after a prominent anti-LGBT+ Twitter account, Libs of TikTok, drew attention to a years-old “diversity and inclusion” statement. a year on its website.

“Camp Ramah, which has dozens of camps across the country, has announced that it is housing children based on their gender identity rather than birth sex,” the account tweeted Wednesday afternoon. It related to a document released by Camp Ramah in California explaining how the camp would include staff and campers from different religious backgrounds, family structures, gender identities and more.

The tweet was standard fare for Libs of TikTok, which has amassed 1.3 million followers for its stream of mostly anti-LGBT+ content, much of which is aimed at sparking outrage over how public schools and individual educators teach about gender and sexuality. The growth of the account was accompanied by a broad push from conservative lawmakers in many states restricting medical care to trans children, penalizing their parents or limiting their participation in school activities, including sports.

The identity of the person behind ‘Libs of Tiktok’, Chaya Raichik, an Orthodox Jewish woman based in Los Angeles, was discovered by Washington Post reporter Taylor Lorenz in April. In an in-depth report, Lorenz detailed how Raichik’s account can set the agenda for conservative figures as well as online trolls, who have inundated some of the people the account has featured with harassment and even death threats.

It’s unclear exactly what that looked like for Camp Ramah in California. Directors Rabbi Joe Menashe and Ariella Moss Peterseil told parents via email Thursday that they were aware of a “social media offensive” against the camp and had taken steps to ensure Security.

“We have no reason to believe there is a specific threat; however, we are responding and communicating with you in accordance with our commitment to transparency,” they wrote to the families of the hundreds of campers summering at the camp, located in Ojai, California.

The entrance to Camp Ramah in California, located in Ojai, is seen in a 2006 photograph. The Hebrew words on the wooden sign mean “Welcome.” (Stephen Osman/Los Angeles Times via Getty Images)

“Please know that the camp continues to operate seamlessly for our chanichim (campers) and tzevet (staff), and we are in contact with our security partners out of an abundance of caution,” they added.

Joined at the camp on Thursday evening, Menashe told the Jewish Telegraphic Agency: “We are currently focused on providing a camp for our community and we have no comment.

Ramah is the Conservative movement of Judaism’s summer camp network, and the National Ramah Commission operates 10 overnight camps and five day camps in the United States and Canada.

Each Ramah camp defines its own approach to gender diversity and inclusion, according to the National Ramah Commission. Ramah New England, for example, noted in a diversity statement issued in April that some of his campers might identify as a different gender than they had in the past, and therefore might be assigned to a different bunk in the future.

The statement Raichik is referring to from Ramah, California is not new. It was uploaded to the camp website in April 2021, and the sexual orientation and gender diversity section is only a small part of it. It says the camp is committed to creating a “safe and welcoming environment for LGBTQ+ identified children, staff and parents” and also acknowledges that accommodating the needs of transgender campers can be difficult for some.

“We recognize that this may represent a ‘learning zone’ for some of our families,” the statement read.

Ramah is far from the only camp that has also sought to be more inclusive of transgender, non-binary, or otherwise gender-nonconforming children; some Jewish camps have been offering all-gender or transgender-friendly housing since at least 2016, and Jewish camp elders opened a new camp this year exclusively serving transgender children, of all religions.

Libs of TikTok also called out some of the others.

“Camp Akita in Ohio, an accredited camp with @ACAcamps, houses children based on their gender identity,” the account tweeted on July 4. “Parents will not be notified if their child changes cabins or if their child’s counselor or roommates, who sleep in their cabin, identify as transgender.

While many replies to Libs of TikTok’s post about Camp Ramah mocked the camp or criticized it for its approach to gender and sexuality, others responded with a different approach.

“Hi. Parent of three #Ramah the campers and I couldn’t be more proud of our efforts to support LGBTQ youth,” wrote an account run by a woman in Phoenix. “And you know what else? My kids don’t mind because the camp has fostered their sense of community and inclusion. You should think about that.