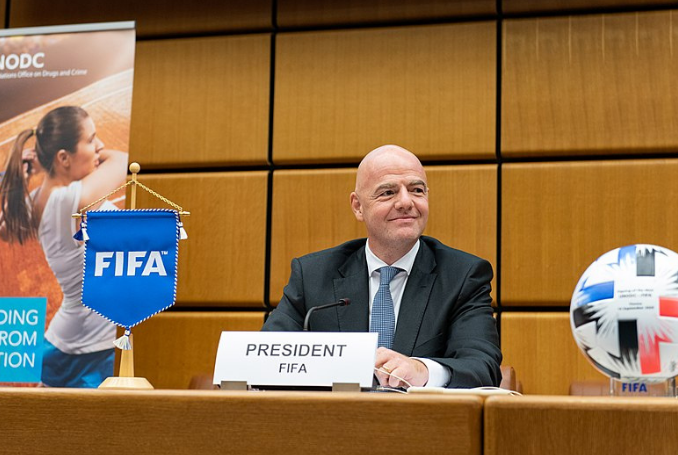 Hypocrisy and double standards: FIFA’s message to Palestine and the world

The Russian invasion of Ukraine and the international sympathy with Ukraine illustrates the hypocrisy and double standards that the West employs in handling this issue as opposed to the silence and superior handling of other issues in Palestine, in Iraq, Syria, Afghanistan, Yemen and Libya.

FIFA and UEFA have prevented athletes and the public who support Palestine from mixing sport and politics, while sympathy for Ukraine has become part of the match rituals and ethos of both organisations. The hypocrisy and double standards of Western countries and their institutions have deeply disappointed us, whereas we were previously aware of their positions. In response, many have begun to reconsider their relationship with these institutions, leading to a loss of respect for them.

Russian tennis player Artem Dzyuba said he was opposed to any war, but he asked: “Why did they separate politics from sport for so long and then, when it comes to Russia, they forgot this principle.” Morality is indivisible, that is, one cannot respect the feelings and rights of one group while ignoring or despising those of another group.

As a result, many people, including former Egyptian soccer star Mohamed Abu Treika, have called for sanctions against Israel, similar to those taken by FIFA and its European counterpart, UEFA, against Russia and its clubs. An announcer asked Egyptian champion Ali Farag to talk about Ukraine when he won the Optasia squash championship in Britain. He has answered:

“We all see what is happening in the world right now with Ukraine, and no one is happy with what is happening. No one should accept any murder in the world or any oppression. We were never allowed to talk about politics in sport, but suddenly it’s allowed. I hope people watch the oppression all over the world. The Palestinians have lived this for 74 years. »

The “FIFA’s “neutral” stance on settlement clubs participating in the Israeli league confirms the essence of its leadership which is biased in favor of Israel and the Israel lobby. To remain as FIFA President, Gianni Infantino must give up making principled decisions that could cause him headaches, upset his position or threaten FIFA.

FIFA must give in to influential powers, such as the United States and the Israel lobby, these concessions being its refusal to impose sanctions against the Israel Football Federation, and its declaration that the “Territories” are a concern for the authorities international organizations, and FIFA must remain impartial. As a result, it disregards its own constitution and laws.

It’s ironic to see FIFA focusing on the state of the sports facilities Qatar is building for the 2022 World Cup and criticizing the US travel ban on many Muslim-majority countries in 2017 Infantino slammed it, saying: “Regarding FIFA tournaments, any team that qualifies for the World Cup, including its supporters and officials, must obtain a visa for the host country, otherwise there will be no World Cup.

Infantino also campaigns against social ills and threats to the integrity of football in Europe, including racism, discrimination, violence, hooliganism and match-fixing. FIFA’s position reminds us of Western countries, in general, who call for justice and democracy but ignore it in their relations with Israel.

In the 1930s, when there was a conflict in the Palestinian sports arena between the Zionist-dominated PFA Football Association and the Palestinian (Arab) Sports Federation, founded in 1931 and re-established in 1944, FIFA n did not hide his bias towards the first and his superior relations with the second.

In 1937, Khader Kamal, president of the Arab Sports Club in Jerusalem, asked FIFA to allow Arab teams to compete with those from Egypt, Lebanon and Syria, at a time when Palestinian Arab teams were not were not members of the PFA. Subsequently, the FIFA secretary sent a letter to the PFA informing them of Kamal’s request, mentioning that he had not given any recommendation to these gentlemen regarding the Arabs and Kader Kamal.

From European and international organizations, it is not surprising to see such positions that sanctified colonialism and helped pave the way for the building of the Jewish national home. The racist language and superior treatment of the “backward” Orient by the “civilized” West has always been present, treating the Orient as an inferior species not worthy of respect, but of contempt, and uncivilized peoples devoid of any growth or growth potential. progress.

Throughout history, racism, hypocrisy and injustice have been intertwined. FIFA – along with other Western countries – is suddenly sympathetic to Ukraine, while ignoring Palestine, probably because Ukrainians are civilized, blue-eyed and live next door, as some Europeans have sadly pointed out .

– Issam Khalidi is an independent scholar, is the author of History of Sports in Palestine 1900-1948 (in Arabic), One Hundred Years of Football in Palestine (in Arabic and English), co-edited Football in the Middle East, as well as sports-themed articles and essays included at

Emmanuel Carrère writes his way through a breakdown