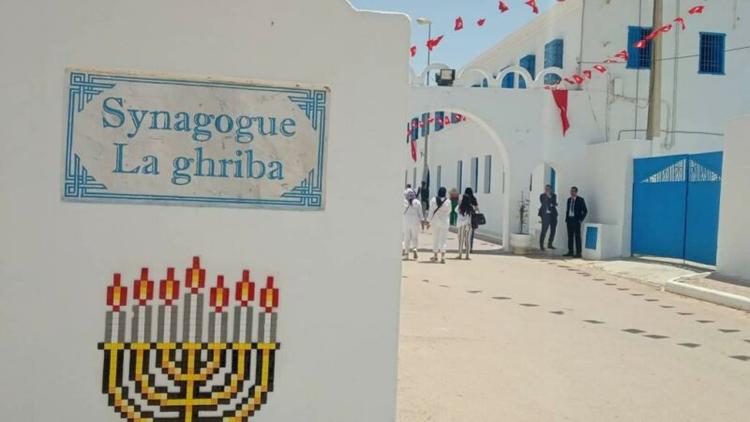 This article by Imen Boudali was first published by Raseef22 and is republished through a content-sharing partnership with Global Voices.

( Globalvoices.org ) – In May of each year, Tunisia hosts a unique and extraordinary event. The North African country, home to Africa’s oldest synagogue, celebrates and revives its Jewish roots through the La Ghriba pilgrimage, an event bringing together different religions on the peaceful island of Djerba.

Home to the oldest synagogue in Africa, Djerba celebrates its Jewish roots every year

As soon as the ferry approaches the coast, Djerba welcomes you with serenity. This island, the historical homeland of Tunisians of the three main monotheistic religions and the site of an annual Jewish pilgrimage, is often called “the island of dreams”. It gives visitors a sense of place and embraces them like no other place. Palm trees as far as the eye can see, all along the sometimes rudimentary roads, we quickly see the emblematic houses of Djerba or hootthe small colorful shops of the island, the men in gray jebbaswomen in beskris, malhfas (traditional outfits worn only by women of this island) and dhallalas (traditional straw hats) everywhere.

The Ghriba is an event bringing together different religions on the peaceful island of Djerba. Image by Imen Boudali, used with permission.

This landscape is completed by the smell of the beautiful blue sea, the fishermen and their boats scattered here and there, the sellers of bouquets of jasmine flowers, the groups of old men playing checkers and the women driving motorbikes. Essentially, when you’re here you absorb colors, hues and shapes, sometimes basic and minimalistic, but never dull or boring.

But it is not only the heavenly coasts or the incomparable sunsets that make this place unique and magnificent; it is the people, and, for this, Djerba is not only adored by Tunisians, but by countless visitors from all over the world.

The inhabitants of Djerba have managed throughout the history of the island to maintain a peaceful coexistence between its Muslim, Christian and Jewish communities which has become extremely rare, not only in the Arab region, but also in the world.

Before the creation of Israel in 1948, Tunisia was home to more than 100,000 Jews, but over the years, and with the Arab-Israeli war of 1967, many left. However, the country is home to one of the largest Jewish communities in the MENA region with 2,000 Jews, 1,200 of whom live in Djerba.

To this day, and despite their small number, Jewish Tunisians continue to occupy an important place in Djerbian society and are, like their non-Jewish neighbors, active in the island’s tourist industry.

Djerba is home to a Jewish school (yeshiva), which offers both secular and religious education to five- and six-year-olds as well as 14-year-olds. As we walk through the classrooms, we hear students discussing verses from the Torah, alternating between the Tunisian Arabic and the biblical Hebrew of the texts. In another school on the island, Souani Primary School, Muslim and Jewish students study together in the same classrooms, sharing the pursuit of secular studies and anchoring the future of their society in the principles of interreligious harmony.

The Jewish heritage of Djerba, as well as the heritage of Tunisia’s religious diversity, is on full display every year during the Ghriba pilgrimage. This annual appointment took place this year from May 14 to 22 with various events, including the visit to the synagogue, alms and alms, prayers and other local traditions.

Non-Jewish Tunisians frequently participate in some of the traditions of the synagogue. For example, many women and local visitors bring eggs marked with the names of young girls in their family and leave them in a particular place in the synagogue. Once the pilgrimage is over, the eggs are taken back to the maidens who then eat them in hopes of boosting their marriage prospects.

As you make your way to the synagogue, the presence of security is certainly noticeable. Hundreds of police, special forces and armored vehicles are stationed along the street and around the place of worship to ensure the smooth running of the festivities. Before entering the premises, visitors pass through a scanner, and their belongings are thoroughly searched.

As you pass through security, hundreds of Tunisian flags and the characteristic blue and white of the buildings greet you.

Music plays in the background. Everyone feels the party mood. Young and old, you can see that everyone dresses in their best clothes. Under the sun of an April afternoon, groups of visitors flock in festive clothes, hurrying to find a place in the Oukala (kind of very traditional and cheap hotel in the popular Tunisian districts) where a musical evening is organized.

“My mum bought some new clothes for me to wear today. Now I’m waiting for my friends to come over so we can play together. I’m very excited!” said Ishmail, 8, smiling from wholeheartedly alongside his parents and other family members.

Other participants, more focused on the religious aspect of the event, choose to go directly to the synagogue. Despite its relatively small size, the interior of the building is surprisingly beautiful. The blue earthenware tiles, embracing the four walls up to the ceiling, are striking. The room is teeming with people.

Under the arcades and the eternal lamps, some sit to read the Torah, others light candles and whisper, discreetly, their eyes closed, their long-held wishes.

“I came to lay this egg in the name of my single niece,” said Eliana, a Franco-Tunisian septuagenarian. “I know she doesn’t really believe these stories, but ever since I was little I used to come to that synagogue and see my mom and aunts do that. It’s part of our history and our identity, and I keep that legacy alive.

This annual pilgrimage is not only important for the local community, but for the whole country, from an economic point of view, through the revival of the tourist sector of the island, and political, since it contributes to forging the identity peaceful and multicultural Tunisia. The event is prepared months in advance, with the participation of various stakeholders, including the Ministry of the Interior, all to avoid any unpleasant surprises.

In recent memory, Tunisia has experienced two tragic attacks against the Jewish community of Djerba. The first was in 1985, when a soldier in charge of maintaining order opened fire inside the Ghriba synagogue, killing five people. Then in 2002a 25-year-old Franco-Tunisian linked to Al-Qaeda killed 21 people.

Faced with these incidents, the Tunisian authorities have sought to secure this annual event. Head of Government Najla Bouden, Minister of Tourism Mohamed Moez Belhassine, Governor of Medenine Said Ben Zayed, Chief Rabbi of Tunisia Haïm Bittan, as well as several ambassadors and diplomats from countries such as France, Belgium, Germany, Italy and the United States assisted the launch of this year’s pilgrimage.

“Djerba remains a melting pot of civilizations and a land of peace and tolerance for all, from which emanates a message of love and peace,” Bouden said.

For his part, Minister of Tourism Belhassine said that the La Ghriba pilgrimage is an important event that kicks off the tourist and summer season and sends multiple messages to the world about peaceful coexistence and tolerance for a better and more open community.

He added that this important event, which he said brought together around 3,000 visitors, 50 journalists and dignitaries from 14 nationalities, is an opportunity not only to discover the multicultural aspect of the island, but to immerse yourself in a rich destination offering endless benefits.

As for the organizers of the pilgrimage, led by Perez Trabelsi (president of the Jewish Committee of the Ghriba and leader of the Jewish community of Djerba), they considered that this year’s visit was exceptional and distinct on several levels. For them, after two years of the pandemic, sending a message of peace and coexistence from Tunisia to the rest of the world was crucial in these tumultuous times.

The Bridge features personal essays, commentary and creative non-fiction that shed light on the differences in perception between local and international coverage of current events, from the unique perspective of members of the Global Voices community. The opinions expressed do not necessarily represent the opinion of the community as a whole. All Posts

By Imen Boudali is a Tunisian journalist who has worked in Tunisia and throughout the MENA region, contributing to outlets such as Al-Ahram and Arab Weekly. This article first appeared in Raseef22.

The Stone of Magdala in Israel’s Galilee, an “oasis of encounter”…