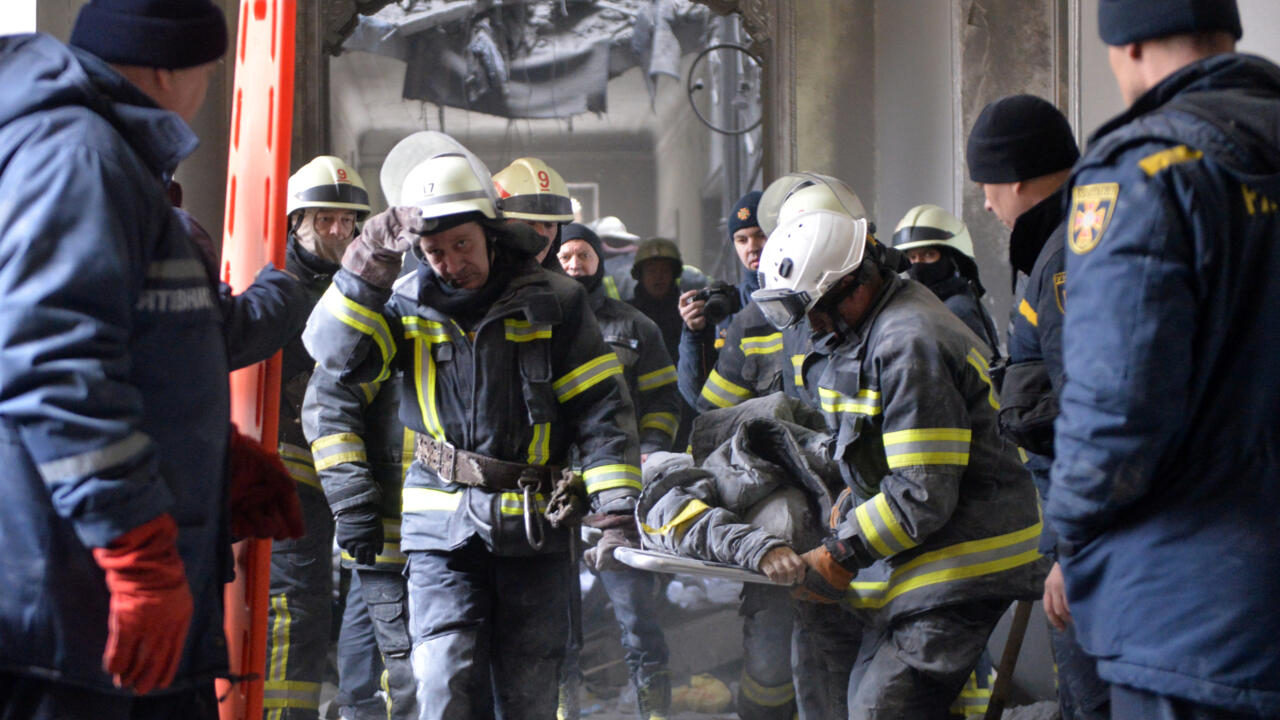 Kyiv (AFP) – Russian forces said they captured a Ukrainian port on Wednesday as Russian and Ukrainian troops battled for another urban center and President Volodymyr Zelensky said Moscow wanted to “wipe out” his country.

As the conflict escalated further on the seventh day of the invasion, the Russian military said it had taken control of the Black Sea port of Kherson in southern Ukraine.

After Washington called Russian President Vladimir Putin a “dictator”, the Ukrainian leader said a Tuesday strike at a television mast in the capital Kiev demonstrated Russia’s threat to Ukrainian identity.

“They don’t know anything about our capital. About our history. But they have orders to erase our history. Erase our country. Erase all of us,” Zelensky said in a video.

The 44-year-old, who is himself Jewish, urged Jews around the world to speak out.

“I speak now to all the Jews of the world. Don’t you see what is happening? That is why it is very important that millions of Jews around the world do not remain silent at this time,” he said. he declared.

Ukraine says more than 350 civilians, including 14 children, have been killed in the conflict and the International Criminal Court has opened a war crimes investigation against Russia.

In his first State of the Union address on Tuesday, US President Joe Biden warned that the sanctions campaign aimed at crippling Russia’s economy would intensify and its oligarchs were being targeted.

“A Russian dictator, invading a foreign country, has costs around the world,” Biden told lawmakers, promising “vigorous action to ensure that the pain of our sanctions is targeted on the Russian economy.”

On Wednesday, however, Russian Defense Ministry spokesman Igor Konashenkov said Russian forces had full control of Kherson, a city of 290,000.

Konashenkov said in televised remarks that public services and transportation were operating as usual.

“The city is not experiencing a shortage of food and essential goods,” he said.

He said talks were underway between the Russian military and local authorities on maintaining order, protecting the population and keeping public services running.

Seemingly contradicting the Russian military’s claims, he said he had to find a way to “collect the (bodies of) the dead” and “restore electricity, gas, water and heating to where they were.” are damaged”.

The Ukrainian military said Russian paratroopers also landed in Kharkiv, a city in northeastern Ukraine near the Russian border with a population of 1.4 million.

“There is an ongoing fight between the invaders and the Ukrainians,” the military said in a statement on the Telegram messaging app.

Ukrainian forces said Russian strikes hit a residential building and a government building in the city on Tuesday, killing 18 people, drawing comparisons to civilian massacres in Sarajevo in the 1990s and condemning what Zelensky called ” war crime”.

Western countries have imposed crippling sanctions on the Russian economy and there have been international bans and boycotts against Russia in everything from finance to technology, sports to the arts.

EU and NATO members also sent arms and ammunition to Ukraine, although they made it clear they would not send troops and the EU dampened hopes of Zelensky to join the bloc.

In his speech in Washington on Tuesday, Biden announced new measures against Russia and its wealthy elite with a new task force to prosecute the “crimes” of Russian oligarchs.

“And tonight, I am announcing that we will join our allies in closing American airspace to all Russian flights, further isolating Russia and further straining its economy.”

The US leader said Putin’s aggression was ‘premeditated and totally unprovoked’ – but hailed the Western alliance’s resolve to respond with heavy-handed sanctions.

“Russia will be a pariah”

In response to the invasion, Western companies have also withdrawn from projects in Russia, worsening Moscow’s economic record which has seen the ruble plummet this week.

Apple, ExxonMobil and Boeing on Tuesday announced in successive stages their withdrawal or freezing of business in Russia.

These decisions followed earlier announcements from Disney, Ford and Mastercard, among others.

“Going forward, Russia will be a pariah, and it’s hard to see how it can restore anything resembling normal interactions in the international system,” said Sarah Kreps, a professor at Cornell University.

The invasion sent global markets into a spiral, with crude surging above $110 a barrel on Wednesday and stocks crashing.

Initial talks between Russia and Ukraine on Monday failed to yield any breakthroughs.

Since then, Russian forces have shelled Ukraine.

Strikes were reported in Konstantinovka in eastern Ukraine, in Bordodyanka near Kiev and in Zhytomyr in central Ukraine.

In a significant strategic victory, Russian troops attacking from the Crimean peninsula said they had linked up along the Sea of ​​Azov coast with pro-Moscow separatists in eastern Ukraine.

The separatists said the city of Mariupol on the Sea of ​​Azov was surrounded.

As fears grew of an all-out assault on Kiev, residents spent another night crammed into makeshift bomb shelters.

“We have train tickets to western Ukraine for tomorrow,” she told AFP as the air raid sirens sounded directly overhead.

The continued relevance of modernism

Putin faces stronger than expected resistance inside and outside Ukraine