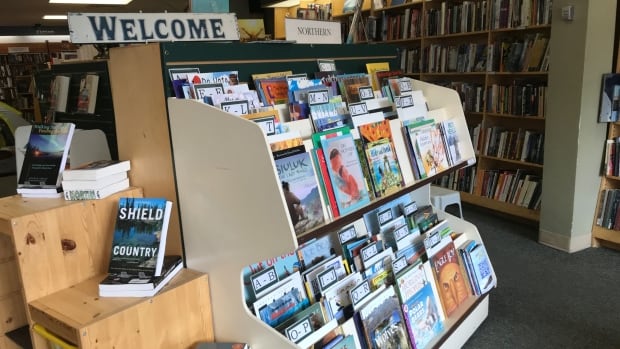 ‘Even though she gave the store away, it’s her legacy’: Book Cellar changes ownership

After more than 40 years, Canada’s northernmost independent bookstore has a new owner who says she will focus on preserving the legacy of community development through literature.

Jennifer Baerg Steyn bought the store from founder Judith Drinnan, who started the Book Cellar in the 1970s with a loan.

Drinnan has made it an institution that delivers books to the Northwest Territories and Nunavut and serves northern libraries and schools.

That’s what led her to walk through the door of the Book Cellar.

Baerg Steyn started at the store as an employee after moving from British Columbia to the Northwest Territories.

“[Bookstores] are incredible institutions that are simply essential to the community and I’ve really seen it here with the Book Cellar,” she said.

“We have a roots system that has spread from the store and hopefully brings other communities to life with literature. We tell stories about ourselves…our communities and these things are essential to understanding who we are and where we are,” said Baerg Steyn.

Books are a way to stretch the imagination and make people feel seen and not alone, she said.

One year she read 180 books and spent the 12 months writing reviews for them, which inspired her to imagine a future in books.

She is also interested in books on mental health, housing, incarceration and universal basic income.

Baerg Steyn has been a hospital chaplain, dispatcher and of course Book Cellar employee.

We wouldn’t have the bookstore without the years and hours of dedication she has put into it.– Jennifer Baerg Steyn, new owner of the Book Cellar

During COVID-19, Baerg Steyn was deciding where to take his career.

The change in ownership happened much like the creation of the Book Cellar.

Drinnan came to Yellowknife in the 1970s to work as a teacher.

While working part-time at a stationery store, she asked the owner if he was interested in selling.

“He said, ‘No, I’m not interested,'” Drinnan told CBC News in an interview on the outlet. 40th anniversary. “So I kind of left and I was still thinking about what I wanted to do. But one day he came up to me on the street and said, ‘You know, I thought about it, if you want buy the bookstore side of things.'”

Last year, Baerg Steyn said she had found the courage to ask Drinnan, who had been considering a transition for the business, if she would be willing to sell.

“It’s really her baby. Even though she gave the store away, it’s her legacy,” Baerg Steyn said.

“We wouldn’t have the bookstore without the years and hours of dedication she put into it.”

Some changes, but mostly the same

Baerg Steyn said many features of the book cellar will remain the same, but it will make a few additions, bringing in audiobooks from ethical suppliers, expanding the French section and introducing more non-book retail items. .

When COVID-19 subsides, she hopes to organize open-mic nights and regular storytimes for children.

“These are all fantasies that come in a world not far from COVID,” she said.

“We really want to root as deeply as possible with the community here.”