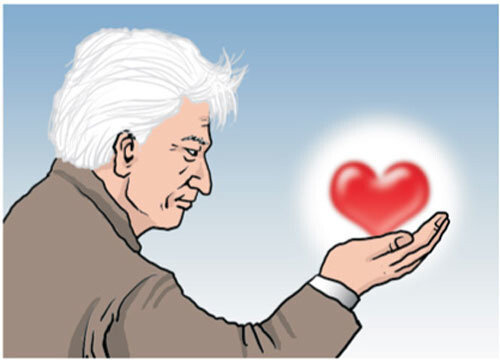 Some learn hate from hate, while others seek love from love. This is determined by the ability of the individual. Jacques Derrida, French philosopher of Algerian origin, deconstructed the love of hatred.

He excelled in studies in his childhood. At the primary school in Algeria, then colonized by France, the best-rated students took turns hoisting the flag. But when Derrida’s turn came, another student took his place because he was Jewish. The French government had also put in place quotas to limit the number of Jewish students, halving the quota and ousting Derrida, a “little black Jew who appeared Arab” in October 1942. He returned to school in April of the following year, but the incident was traumatic for the 14-year-old boy.

The trauma was traceable in all of his words and writings as a philosopher. In other words, the trauma became a starting point for his philosophical work. Psychological trauma did not encourage him to work against hate. Neither resentment nor feeling of inferiority was present, only hospitality towards others. He said that true hospitality is being hospitable to people who are difficult to hospital and that we should be hospitable to everyone, including animals. This is why he was enraged by Israel’s violence against Palestine, even though he was a Jew. He disliked the contradiction and hypocrisy of the Jews causing suffering while they have suffered by others for centuries.

He was a compassionate philosopher who saw psychological trauma as the foundation of ethics. He believed that all thought came from trauma. He believed that there was no need to treat or heal trauma. Ironically, his idea of ​​treatment came from refusing to be treated. Perhaps it was possible because he was a man of great ability.

Rising from the ashes, the store reopens early to light up Jewish people in the dark of winter

Philotimo, leventia and storytelling: the moral necessity of Greco-Australian narratives