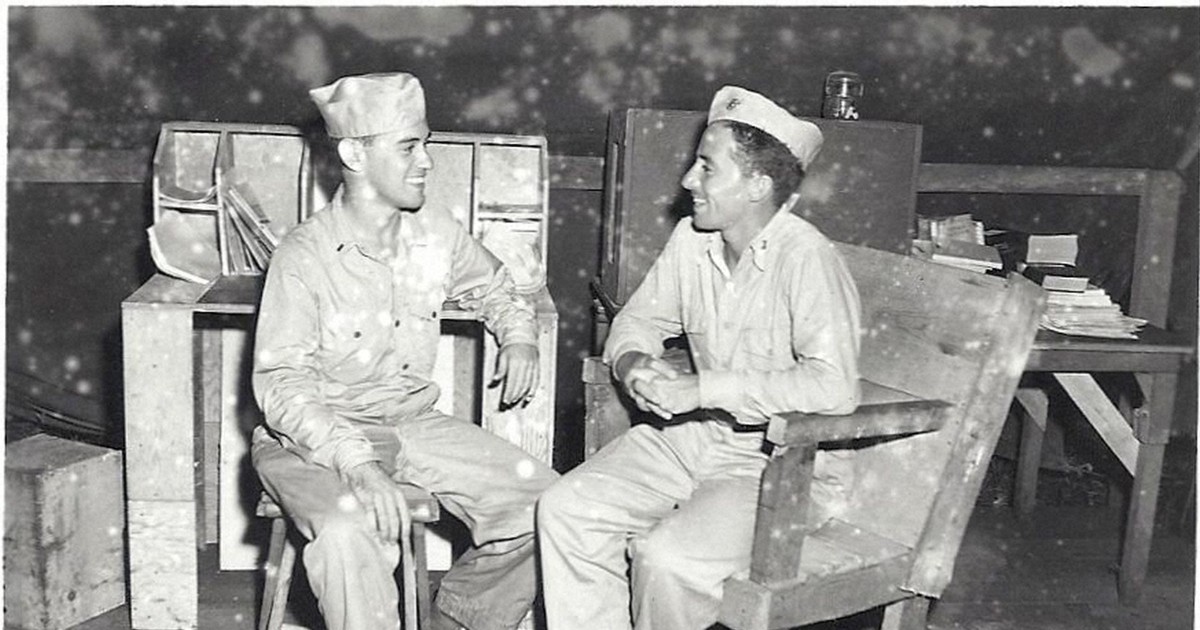 TOKYO – Donald Keene, who had stayed in Tsingtao in China for a period after World War II, finally set foot on the Japanese mainland in December 1945. Although there are no documents indicating the exact date, he There is a letter dated December 20 that was sent from Honolulu, Hawaii to Ted de Bary, a fellow US Navy language officer from Keene. As he mentioned in his diary that his stay lasted about a week, we can guess that Keene spent a week in Japan around December 10. After arriving at the Atsugi military base, he headed for central Tokyo by bus.

As the bus headed towards central Tokyo, I got the reverse of the usual feeling one gets when entering a city: the buildings became fewer, not more, and eventually we were going through areas without a single building standing. Elsewhere, there were only isolated warehouses, their earthen walls having withstood the fires better than the traditional Japanese wooden houses. Near what I considered to be the center of town there were brick or concrete buildings that appeared to be whole, but on closer inspection they sometimes turned out to be nothing more than burnt shells .

It had been four months since the end of the war. Keene’s description shows that the heart of Tokyo was still as devastated by American bombing as it had been just after the raids nine months earlier. Keene traveled to Yurakucho, the area where another language agent was staying, and found accommodation. Nearby was the Dai-ichi Seimei building, which houses the headquarters of the Supreme Allied Commander (GHQ). At that time, GHQ was advancing democratization policies in Japan. At the same time, a series of Class A war criminals, including former Prime Minister Hideki Tojo, were arrested.

However, Keene, who was only stopping on the way back to the United States, had no special tasks to perform. Later he laughed and said, “There was a misunderstanding that I was involved in the democratization of Japan after the war, but I was just a young officer. I didn’t have that. in me.” What Keene could do, for a time, was to inform families in Japan that their relatives in the POW camps or the Japanese he met and befriended on the battlefield had survived.

It was exciting to be in Japan, but what I wanted to do the most was not to visit museums, theaters or places of scenic beauty, even though all of that appealed to me. Rather, I wanted to tell the prisoners’ families and the Japanese people I had known in China that these men were safe. No doubt the families had been officially informed that my friends had died as heroes, but I was sure that they would be happy, not ashamed, to learn that their sons or husbands were still alive.

I found the family of my closest Japanese friend in China living in the basement of what must have been a splendid house in Yotsuya that had been destroyed during the bombing. I then went to the Shonan region in search of the family of a prisoner with whom I had spoken many times, not about war, but about literature and music. Unfortunately, his name was Sato, and even in a relatively small town there were a lot of people with that name. As I went from one house in Sato to another, I was followed by a train of small children, but in the end I never found my friend’s family.

(Chronicles of My Life: An American in the Heart of Japan)

There have also been successes. Below, Keene recalls a trip to Kamakura, south of Tokyo.

My most memorable search, however, was successful. I had been asked, again by my friend from Tsingtao, to inform the president of his company that he and his family were safe and sound. The president’s house was in Kamakura. I went there one evening with a friend, another translator who was stationed in Yokosuka. It was only about six o’clock, but it was already dark. I rang and a girl came to the door. She glanced at the two US Navy officers and let out a cry. The people inside the house, who could see us through the open door, didn’t shout, but they might have, at the thought that we had come to commandeer the house. Later, when I had explained my course, we were cordially received, and the girl who had shouted played the piano.

We left the house around eight o’clock. If I remember correctly, the streets were not illuminated, but the moon was bright, and at my friend’s suggestion, we walked along the train tracks towards the large Buddha statue, the Daibutsu. Suddenly the statue was before us, serene in the moonlight. For the first time, I felt that I was really in Japan.

These passages from his autobiographies were written from the 1990s to the early 2000s for Japanese newspapers. They are clearly designed for the Japanese reader, as they are easy to follow and avoid harsh expressions.

Meanwhile, Keene contributed his letters to a volume of missives exchanged shortly after the end of World War II between three young American military officers fluent in Japanese. An excerpt will be featured here to show how candid Keene was with his comrades at the time.

In the foreword to the Japanese publication, whose English equivalent is titled “Eyewitness to History: The First Americans in Postwar Asia,” Keene wrote the following in Japanese about the reason for collecting letters: “We We sought to exchange letters because we did not feel connected with articles on the Pacific war written by professional journalists. The war correspondents we met expressed their displeasure at having been assigned to cover the Pacific war. “class B” between the United States and Japan, instead of the “class A” war in Europe. certainly no correspondents familiar with Japanese history or language, and their articles were often superficial.” It seemed that behind the publication was a dissatisfaction with the reporting of the time.

After several days of wandering around Shanghai, I managed to return via Japan and spent some time there. There is little point in describing my reactions except to note that I was not disappointed, and that knowledge of the Japanese did not fully convince me of the more real virtues of the Chinese. I was for a long time one of those who made fun of Mussolini for “running the trains on time” and of people who worried foolishly about the uncleanliness in Chinese restaurants, but like the novels about bandits and prostitutes in heart of gold, the mythology of irregular individualism. Honesty, cleanliness, promptness, courtesy and the rest turn out, after all, to be virtues and not bourgeois fascist vices. They are not everything, but I no longer despise them, and I can no longer despise the Japanese whose newspapers I read.

My main achievement in Japan was meeting people, either by design or by chance. I visited Yamada’s mother at her request. She lives in a beautiful suburb of Tokyo that was not bombed. We talked a little together about his son and the war. “My boy has always been so interested in America. He studied English and neglected everything else. What a terrible thing that war broke out between two countries he loved.”

She asked me about my war experiences and I told her a bit about Okinawa. “Were you really in Okinawa? What an awful place that must have been. They said that everyone, even women and children, had been killed, but now I read in the newspapers that there were prisoners. I imagine the prisoners will be going home soon. It used to be considered very shameful, but now it doesn’t matter.

(Eyewitness to History: The First Americans in Postwar Asia)

Keene’s sudden visit must have surprised the family members. However, even greater must have been their gratitude to the young man who informed them that their loved ones were alive. Such occurrences during Keene’s first visit to Japan reveal his character, which remained constant throughout his life.

(This is part 10 of a series. The next “Donald Keene’s Japan” story will be published on August 2.)

The original text of Donald Keene’s autobiographies is used with permission from the Donald Keene Memorial Foundation. The foundation’s website is: https://www.donaldkeene.org/

Donald Keene was born on June 18, 1922 in Brooklyn, New York. He was a scholar of Japanese literature and professor emeritus at Columbia University. After earning postgraduate degrees at Columbia University and Cambridge University, he received a scholarship to study at Kyoto University in 1953. Keene developed friendships with prominent Japanese authors, including Junichiro Tanizaki, Yasunari Kawabata and Yukio Mishima. Over the course of half a century, Keene traveled back and forth between the United States and Japan and continued to study Japanese literature and culture, while imparting their charms to the world in English. His major works include a multi-volume history of Japanese literature, “The Travelers of a Century” and “The Emperor of Japan: Meiji and His World, 1852-1912”. In 2008, Keene received the Order of Culture from the Japanese government. The researcher was granted Japanese citizenship within a year of the 2011 Great East Japan earthquake and tsunami. He died on February 24, 2019, aged 96.

Bob Tamasy: Doing well in the age of demanding rights