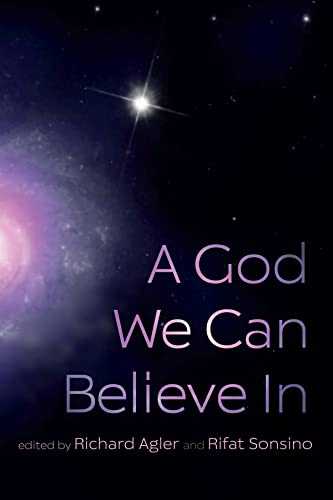 Step into a time machine with me and let’s go back to the early 1990s. Let’s go to a large bookstore. Come with me to the Judaica section.

We will see books with titles such as God Was In This Place & I, I Did Not Know, by Lawrence Kushner; or Who Needs God, by Harold Kushner; and even some of my own books – Putting God On The Guest List and Being God’s Partner. All with “God” in the title.

From this time, feminist versions of the search for God would include Judith Plaskow’s Standing Again at Sinai.

What did many of these books say? We wanted more than just being Jewish for sociology. Jews were drowning in secularism and rolling in the fumes of ethnic pride. If the late 1970s and 1980s were about building community (the havura movement), then the 1990s would be about searching for the transcendent – ​​what we have come to call “spirituality”.

Thirty years later, a new book seeks to revisit this ancient territory, but with a new map (or should I say GPS?)

The book is A God We Can Believe In, edited by Richard Agler and Rifat Sonsino. Check out Richard Address’s Jewish Sacred Aging podcast with Rabbis Agler and Sonsino.

Full disclosure: Both editors, and in particular Rich Agler, are dear friends and colleagues. Check out Rabbi Sonsino’s excellent resource on God. I warmly recommend Rabbi Agler’s book, The Tragedy Test, which he wrote in the wake of the death of his young daughter, and which spawned much of his theological struggle.

How does this book differ from its more “spiritual” predecessors?

The authors of these essays are the theological children and grandchildren of those luminaries of rational Judaism, of religious naturalism—thinkers like Mordecai Kaplan; his son-in-law, Ira Eisenstein (whom Dennis Sasso “resurrects” with love), Roland Gittelsohn, Milton Steinberg, Harold Schulweis, among others. (There must have been women doing Jewish theology in the 1940s to 1970s; a worthwhile project would be to find and recover their teachings).

Modern religious naturalism is a philosophical perspective that generally rejects the reality of the supernatural realm and finds religious significance in the natural world. For most religious naturalists, our physical world is the center of our most meaningful experiences and understanding as discovered by scientific research.

He is “a non-mythical living God”—who does not cause miracles; who does not answer prayer by granting our wishes; and who doesn’t do other things that we have traditionally listed on the divine resume.

What do I like the most in this book? He dares to address the most problematic aspect of Jewish life today: the way we pray, the words and ideas we use when we pray.

Rabbi Anson Laytner thinks we need a new kind of worship that begins with the notion of trauma — not just after post-Shoah PTSD, but after everything (especially, now, COVID).

The phenomenon of transgenerational trauma as a secondary form of PTSD has been well studied in various cultures… But I believe that the spiritual trauma of the Holocaust has been left largely unaddressed by many congregational rabbis and Jewish theologians because the conflict between the interventionism God of Sinai and the inactive God of Auschwitz is too big to be easily solved. Add to this individual encounters with tragedy, illness, and death…As doctors of the Jewish soul, the rabbi’s primary task is to trouble Jewish minds and hearts. This is how spiritual scar tissue is removed and true healing begins. It will anger some Jews and make other Jews uncomfortable, but it will cause many Jews to breathe a sigh of relief.

Rabbi Laytner says that the task of troubling Jewish minds and hearts “cannot take place during a service; it must take the place of the worship service. He would replace worship with group therapy. This is an ambitious project — one which, as will be expected, we could not achieve at the present time.

But, I agree that we need to spend more time in worship itself unpacking the words we pray – in a way that we do freely with Torah study, but have allowed the prayer words to s sit on the page, undisturbed by our requests.

Along the same lines, Edmund Weiss goes to the funeral liturgy – in particular, this traditional phrase Baruch dayan ha-emet, “Blessed be the true Judge [or, the judge of truth — I have seen it translated both ways].

This heavy little phrase contains a compressed version of the entire supernatural Yom Kippur liturgy. The moment of our death is not simply the conclusion of a natural process or a catastrophic event. Rather, it is a death sentence from a brilliant jurist who knows all of our actions and has determined that our flaws and ethical failings merit this ultimate resolution. The time and manner of death, moreover, may have been judged long ago.

But, my hesitation on “Blessed be the true judge” is not that it is unrational or supernatural.

It’s not that it’s theologically wrong. It is that it is pastorally defective. I don’t believe it actually comforts the bereaved, at least not in non-Orthodox circles.

Which brings me to the aspects of this volume that challenge me.

When some authors examine the concepts inherited from God. they use or quote words such as “childish”, “archaic”, “superstitious”, “irrational”, “fantasies” and “delusions”.

Do we really need to rationally believe everything we say in synagogue? Can we not approach our liturgy as we would approach, say, great literature and art — as that which moves the soul?

It turns out that much of our liturgical world relies on fantasy and imagination – what the late Jacob Neusner called “the enchantments of Judaism.” I welcome the Shabbat bride/queen on Shabbat night, along with her fellow Shabbat angels. The same goes for Elijah during the brit ceremony, the end of the havdalah and the Passover seder. “Prove” that they exist? I do not think so.

Rabbi Sonsino suggests archaisms in the liturgy keep young people away from worship. I wonder. The old reformed liturgy, the blue prayer doors, was so heavy because it contained services with no less than ten different theological options, including a naturalistic God.

Were the benches fuller then?

In fact, the most frequented Jewish offices are those whose language is the most mythical and the heaviest in metaphors, that is to say the Orthodox offices. Are they only there for the sense of community?

That being said, I have always believed that we needed a theologically richer prayer experience – one that would include many more voices (the new Reformed High Holy Days liturgy does a spectacular job of this); one that would even include the voices of heretics; the one who would capture the meaning of the prayer like the hitpalel, to judge and evaluate himself.

Yet most contemporary Jews who believe in God conceive of God in various ways that are barely articulated in traditional Siddur, if at all: the immanent God of Kabbalah, the existentialist God of twentieth-century Jewish theologians century Franz Rosenzweig and Martin Buber, the immanent God of Abraham Joshua Heschel, the limited God of Harold Kushner. Where are the prayers that express these visions of the Divine?

Read this book. There is much to ponder and much to cherish.

The question, however, remains: would new and improved divine discourses bring more Jews to the pews?

It would be a worthwhile project for a Jewish doctoral student in sociology.