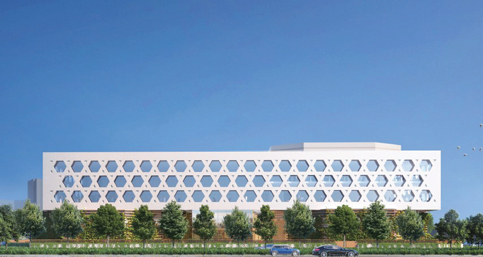 A redevelopment project for a K-5 synagogue, daycare and religious school on Southwest Third Avenue in Miami has received a positive recommendation from a city review committee.

The Beth David congregation plans to build the Center for Jewish Life at 2625 SW Third Ave. The Urban Development Review Board recommended approval with certain conditions.

Lawyers Carlos Diaz and Carlos Lago represented the owner-developer at the board meeting, joined by project architect Bernardo Fort-Brescia d’Arquitectonica.

Mr Diaz told the board of directors that the Beth David congregation needs to upgrade their current two-story facility, which occupies an entire block bounded by Southwest Third Avenue (Coral Way), Southwest 26th and 27th Roads and Southwest Second Avenue.

The project will have five floors, 70 feet high, an open space of 34,535 square feet, with 195 parking spaces and a room for the parking of 10 bicycles.

The project was not required by code to have the advice of the review board, but the city’s planning director asked the board to review the plan, in agreement with the applicant.

Board members and municipal staff noted that the property adjoins an area of â€‹â€‹single-family homes.

Mr. Diaz offered a little history of the property. Beth David, known as the Miami Pioneer Synagogue, is Miami’s oldest Jewish congregation. It was founded in 1912, shortly after Henry Flagler extended his railroad from Palm Beach to Miami, and has been at its current Coral Way location since 1949.

Mr Diaz said the property is about three acres and includes religious education for about 160 students from kindergarten to grade five.

The applicant proposes to increase the number of students to 180 early childhood students, 52 Tikvah1 students and 348 kindergarten to fifth grade students for a total of 580.

The pickup and return of students would all be internal, he said.

Mr. Fort-Brescia explained the indoor location for the autonomous vehicle queue. There will also be a shortcut for the buses to enter, drop off the children and leave, internalized within the site.

Mr Fort-Brescia said the building has multiple uses, from classrooms to a synagogue, a gymnasium, a swimming pool, a playground and sports fields.

He said the proposed facility would include a multi-purpose space, an atrium with a cafÃ©, a preparatory space, a pre-school education center on the ground floor and a security office that overlooks the arrivals on the property.

The project is designed with 46 classrooms, a cafeteria and fitness areas.

The site is framed by a series of two-way streets divided by a median, and there are multi-story towers on three sides.

In a letter about the project, Mr. Diaz said the property is zoned Civic Institution (CI) and has a land use designation of major institutional, public, transportation and utility facilities. This designation specifically authorizes religious and educational activities.

The original complex was built in 1947 and has been in continuous operation with various modifications over the years.

â€œThe applicant proposes to modernize the existing campus to meet the current needs of the congregation and ensure its continued success,â€ Mr. Diaz wrote.

“It’s kind of my old neighborhood,” said board chairman Willy Bermello. “I’m glad I’m not living there today – I would be (here) and I would oppose it.”

â€œTo have a five-story building along a single-family home zone, I would create a heckling going to the (city) commission,â€ Mr. Bermello said.

â€œThe building is a five-story wall. This is what it isâ€¦ it is a horrible gesture for the single family neighborhood along the 26th roadâ€¦ I have a big problem with the mass and the impact on the neighborhood, â€he said .

But Mr. Bermello described his appreciation of the interior vehicle drop-off area, calling it a good design. Other board members also expressed support for the design of the internal drop-off and pick-up area.

Mr Diaz said the facility had been in the area for decades and the congregation was doing â€œcommunity outreach,â€ and did so as the plan for the new five-story facility fell into place.

â€œThere are a lot of community contributions reflected in the project presented today,â€ he told the board.

He added: â€œThere was a choice here over mass. We’re putting a five-story building across from a single-family neighborhoodâ€¦ the planning director saw enough red flags here to say, â€œLet’s let the board look at it.

Board member Robert Behar said he liked the project but also had concerns about the mass.

Board member Dean Lewis suggested a design change to deal with the massing.

Mr. Fort-Brescia said: â€œI am open-minded. We can certainly study the mass.

The council recommended approval of the project on the condition that the classroom part be limited to two levels facing the 26th road, the rest of the classrooms being internalized in the parking lot or the amenity area.