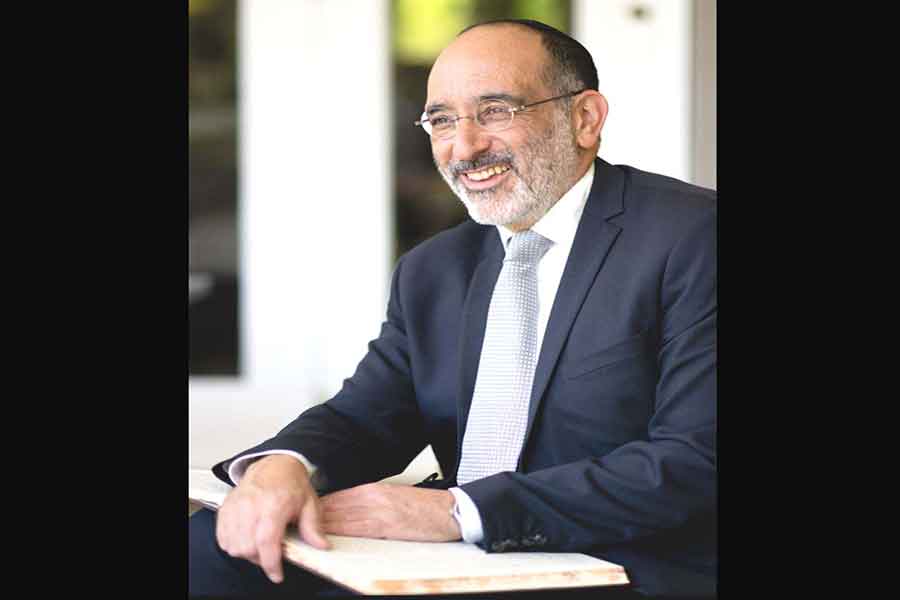 Like many other South African Jews, Rabbi Dr. Warren Goldstein’s great-grandparents emigrated from Lithuania. Born in 1971, Rabbi Goldstein grew up in Pretoria and became South Africa’s youngest appointed chief rabbi when he began serving in January 2005.

Rabbi Goldstein attended Jewish day school and then Yeshiva Gedolah in Johannesburg, where he was ordained a rabbi. His father is a retired High Court judge, and while the young Goldstein served as a synagogue rabbi, he followed in his father’s footsteps by earning a postgraduate law degree and a doctorate. in human rights and constitutional law from the University of the Witwatersrand in Johannesburg. He is also qualified day by the Eretz Hemda Institute in Jerusalem.

A well-published writer, Rabbi Goldstein is the author of several books, including Defend the human spirit and a Hebrew book on halakha competition law. He co-wrote Discussion on the African soul with Dumani Mandela, Nelson Mandela’s grandson, and The legacy with Rabbi Berel Wein, which consists of examining the philosophy of the great Lithuanian rabbis.

The Jewish press spoke to Chief Rabbi Goldstein about his remarkable achievements in outreach and interfaith communication, and his perspective on the state of the Jewish community in South Africa and around the world.

The Jewish press: Could you tell us about some of the human rights initiatives you have implemented?

Rabbi Goldstein: CAP (Community Active Protection) aims to protect people from the trauma of violent crime. It was created about 15 years ago [in South Africa] and has reduced violent crime in its areas of operation by between 80 and 90%. We are in the process of implementing a major expansion program to bring CAP to millions of people in Johannesburg. Another human rights initiative that I founded, drawing on Torah values, is the national “Charter of Responsibilities”. Adopted by South Africa’s Department of Education and taught in schools across the country, the Bill of Responsibilities functions as a corollary to our Constitution’s famous Bill of Rights and reflects the fundamental Jewish belief that every right is comes with responsibility. The initiative has shown a new generation of young South Africans the importance of compassion and respect for the dignity and well-being of others.

As a religious leader, how have you encouraged young people to discover the values ​​of Torah?

I initiated the Beit Midrash program that brought in-depth, text-based learning of Judaism to our Jewish day schools. Then there is Generation Sinai, a platform for parents and children to connect and learn the ideas of Torah with each other. There’s also Sinai Indaba, an annual Torah-learning convention that brings together leading international Jewish thinkers and speakers and thousands of South African Jews of all persuasions. And of course, the Shabbat Project, which brings together Jews of all backgrounds around the world and allows them to keep a full Shabbat together.

I know that the Shabbat project takes place once a year, after Sukkot. Could you tell us more about what made it successful? When did it start?

It was introduced in 2013 in South Africa. Initially, it was not planned to make it a global project. My wife and I created a YouTube video explaining the project, and suddenly emails were pouring in from all corners of the globe from people wanting to participate. Almost overnight, it seems, a movement sprung up from the ground. We all crave connection right now – within our families, with friends, with communities, with ourselves, with Gd. It’s so amazing that Shabbat, which was created at the beginning of time, turns out to be the perfect formula for everything we need in modern life. It was designed by Gd, who created us, and therefore knows what we need to thrive. He has given us this incredible Shabbat gift, and The Shabbat Project’s vision is to share this gift with as many Jews as possible. It is now widespread in more than 1,500 cities and 100 countries around the world. We have 5,000 volunteers around the world helping to deliver the project on the ground.

Given that Project Shabbat could only be practiced at home in 2020 due to Covid lockdowns, did you see a surge of interest in it last year when restrictions started to ease?

Absoutely. In 2021, we saw record participation levels. There was a renewed thirst for human reconnection, which, along with the magic of Shabbat itself, really fueled the Shabbat project.

Have you had any new realizations about this project after seeing how many people around the world have embraced it?

What I have learned from the Shabbat Project over the years is that I do not accept any definition of a Jew as secular. There’s this deep connection to who we are and where we come from, and Shabbat goes right to the heart of that identity. This year there was a whole bunch of Instagram influencers in Israel who you would call secular by any definition, but when you hear them talking about Shabbat and what it means to them, you should completely revise that definition.

The project has touched so many lives – from Jews in the former Soviet Union cut off from Judaism for decades, to fashion moguls in Paris, to award-winning actors and musicians, to Jews in remote places where there is no no Jewish communities. This is the power of Shabbat.

What is the religious climate in South Africa?

The National Council of Religious Leaders (NRLC) is a very important body in the country because it is the space for the development of inter-religious relations. I sit on the central committee, which oversees its work. My colleagues from other faith communities represent the Muslim, Christian and Hindu communities. South Africa is a very religious country. For example, at any presidential inauguration or opening of parliament, prayers are said by a cross section of religious leaders. The country is predominantly Christian. Many large churches here are pro-Israel.

Could you talk about the state of anti-Semitism in South Africa in general and on university campuses?

There is a strong anti-Israeli BDS movement in South Africa. It is causing the same kind of harm in South Africa as it is on campuses in the United States and around the world. But the rate of actual anti-Semitic incidents is among the lowest in the world. The South African Jewish community is very Zionist and we are on the front lines of defending Israel against these attacks. The ANC (African National Congress), the country’s ruling party, has a reputation for being very anti-Israeli. But the South African population, in my experience, is not. My impression is that the vast majority of South Africans, in fact, do not support BDS. On the contrary, many, many are fiercely pro-Israel.

Coming from South Africa, where apartheid was such an important part of your country’s history, what do you think of Israel’s accusation of being an apartheid state?

Having grown up in apartheid South Africa, I know what apartheid is. Because of this, I have written and campaigned extensively around this issue, arguing forcefully that Israel is not an apartheid state. To me, this accusation is deeply offensive, both as a South African and as a Jew. As a South African it is an insult to the victims of true apartheid, and as a Jew it is a defamation of the Jewish state. It’s a complete lie. I wrote an open letter to President Ramaphosa, challenging him, laying out the facts, telling him that he was completely wrong in implying that Israel was an apartheid state.

What is the current state of relations between the South African government and the Israeli government?

There are diplomatic relations, and a new Israeli ambassador has just arrived in South Africa, but it’s definitely a strained relationship. The South African government is really out of step with its own people, the majority of whom, as I said, see Israel in an extremely positive light. I gave a speech to President Ramaphosa at the Gardens Synagogue in Cape Town three years ago, in which I challenged him on his government’s Israeli policies.

Would you say the manufacturing rates of South African Jews aliyah are they high or low right now?

They are high – probably among the highest in the world. In 2021, there were more than 500 new olim. We are a very Zionist community, I can say that with pride.

Could you share some thoughts on the former Chief Rabbi of the United Kingdom Jonathan Sacks, who died in 2020 at the age of 72, and the impact he had on you?

I considered Rabbi Lord Sacks a dear friend and colleague. He was always very kind with his time, wisdom and advice. When I was appointed chief rabbi, he was one of the very first people to contact me to congratulate me, but also to support me. He was one of the few people in the world I could talk to who understood what it was like to be a great rabbi. Apart from [that] obviously, Rabbi Sacks was such an eloquent and profound spokesman for Torah thought in the world.