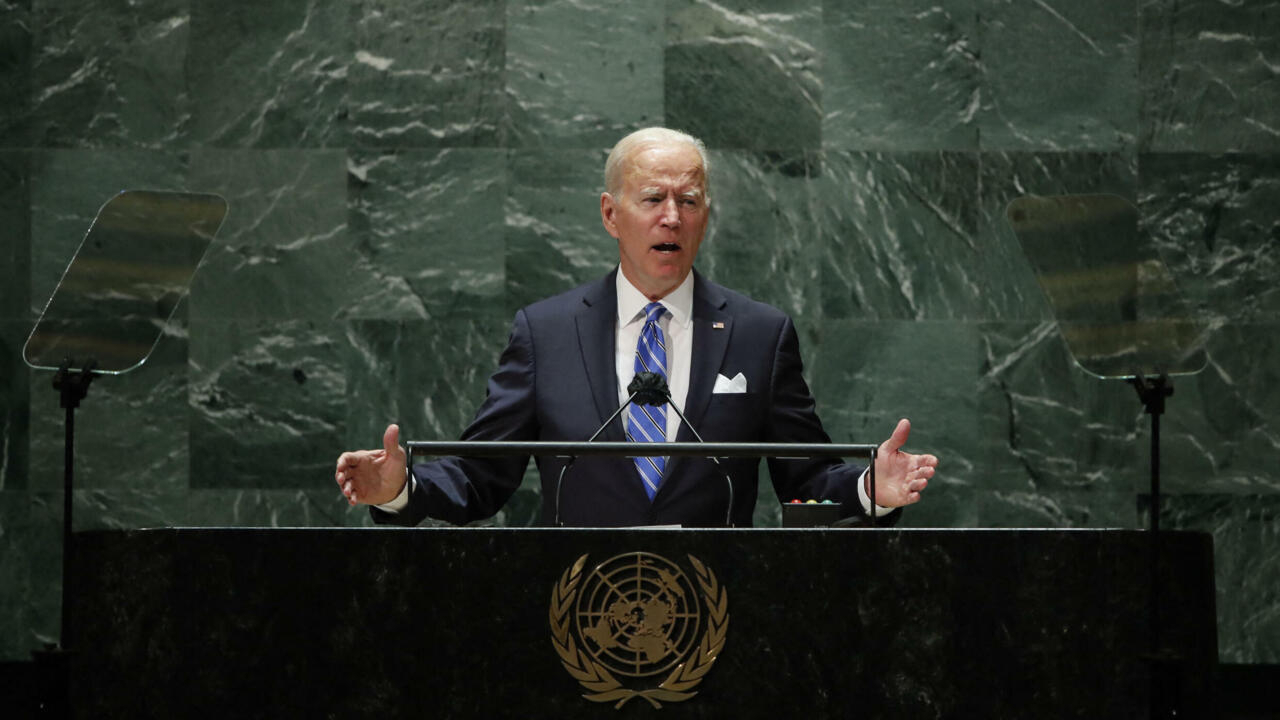 In his first address to the United Nations General Assembly since entering the White House, US President Joe Biden underscored the importance of alliances to tackle global challenges posed by ongoing conflict, climate change and Covid -19. But his remarks follow the controversial US withdrawal from Afghanistan and a US-UK submarine deal with Australia that has angered France.

Biden pledged to work with U.S. allies and partners to work towards a “collective future” of peace and prosperity in his address to world leaders at the 76th United Nations General Assembly in New York.

“We are at a turning point in history,” Biden said, before calling for a new era of global unity to fight the Covid-19 pandemic, climate change and emerging threats.

The US president noted that his decision to end America’s longest war in Afghanistan last month paved the way for his administration to shift its attention to intensive diplomacy.

“We have ended 20 years of conflict in Afghanistan,” Biden said. “And as we close this period of relentless warfare, we usher in a new era of relentless diplomacy by using the power of our development assistance to invest in new ways of uplifting people around the world.”

He said he was motivated by the belief that “to be of service to our own people, we must also engage deeply with the rest of the world”.

Amid mounting tensions with China, Biden also said the United States “is not looking for a new cold war.”

Without directly mentioning China, Biden acknowledged the growing concerns about rising tensions between the two nations. “We are not looking for a new cold war or a world divided into rigid blocs,” he said.

Biden’s speech aimed to present the United States as a reliable ally to its partners around the world after years of “America First” policies carried out by his Republican predecessor Donald Trump.

Biden pledged to defend US national interests, but said any military mission must be transparent and “achievable.”

“The mission must be clear and achievable, undertaken with the informed consent of the American people and, to the extent possible, in partnership with our allies,” Biden said.

The US military “should not be used as the answer to all the problems we see in the world,” he said, adding that military force “should be our tool of last resort – not our first” .

Biden also told the General Assembly that the United States will return “completely” to the Iran nuclear deal – if Tehran does the same: “We are ready to return to full compliance if Iran does the same. “.

He said the United States was working with China, France, Russia, Britain and Germany to “diplomatically engage Iran and seek to return” to the joint comprehensive plan of action, which the America left in 2018.

Regarding the Middle East, he said that a sovereign and democratic Palestinian state is the best way to secure Israel’s future.

“We must seek a future of greater peace and security for all the peoples of the Middle East,” Biden said.

“The United States’ commitment to the security of Israel is unquestionable and our support for an independent Jewish state is unequivocal,” he said, adding, “But I still believe that a two-way solution. States is the best way to secure Israel’s future. as a democratic Jewish state, living in peace alongside a viable, sovereign and democratic Palestinian state.

Guterres said the images of parts of the world of expired and unused vaccines in the garbage told “the story of our time” – with the majority of the richest countries immune while more than 90 percent of Africa does has not even received a single dose.

“It’s a moral accusation against the state of our world. It’s obscenity. We passed the scientific test. But we get an ‘F’ in ethics,” Guterres said.

Biden called for a virtual summit on fighting the pandemic on Wednesday and said he would announce “additional commitments.”

“We seek to advance the fight against Covid-19 and hold ourselves accountable for specific goals on three key challenges: saving lives now, immunizing the world and building back better,” Biden said.

He also said Washington would double funding on climate change – a key to reaching an ambitious new deal in November at a United Nations conference in Glasgow as temperatures and severe weather rise dangerously.

The United Nations says $ 20 billion is missing from the $ 100 billion fund that developed countries have pledged to raise each year from 2020 to 2025 to help poorer countries adapt to climate change.

No leader came to the UN last year because the coronavirus was sweeping the world, so all addresses were pre-registered. This year, the General Assembly gave leaders the choice to come to New York or stay online. More than 100 decided to appear in person in the General Assembly Hall.

Traditionally, the first country to speak is Brazil, whose president, Jair Bolsonaro, is not vaccinated. He reiterated last Thursday that he was not planning to be vaccinated anytime soon, justifying his refusal by saying that he already had Covid-19 and therefore had a high level of antibodies.

The General Assembly opened as diplomatic tensions were already high between some permanent members of the UN Security Council. France was outraged when Biden, Australian Prime Minister Scott Morrison and British Prime Minister Boris Johnson announced a plan last week for Australia to acquire nuclear-powered submarines using American technology. The deal effectively scuttled a previous $ 66 billion diesel submarine contract Australia had with France. France has recalled its ambassadors to the United States and Australia in protest.

French Foreign Minister Jean-Yves Le Drian said on Monday that there was a “crisis of confidence” with the United States following the episode. Biden, for his part, played down tensions with France. Asked by a reporter as he arrived at the UN on Tuesday how he planned to restore relations with the French, Biden simply replied: “They are great.”

Prior to Biden’s arrival, EU Council President Charles Michel sharply criticized the Biden administration for leaving Europe “out of the game in the Indo-Pacific region”.

Durban’s anti-Semitism should not be commemorated – opinion