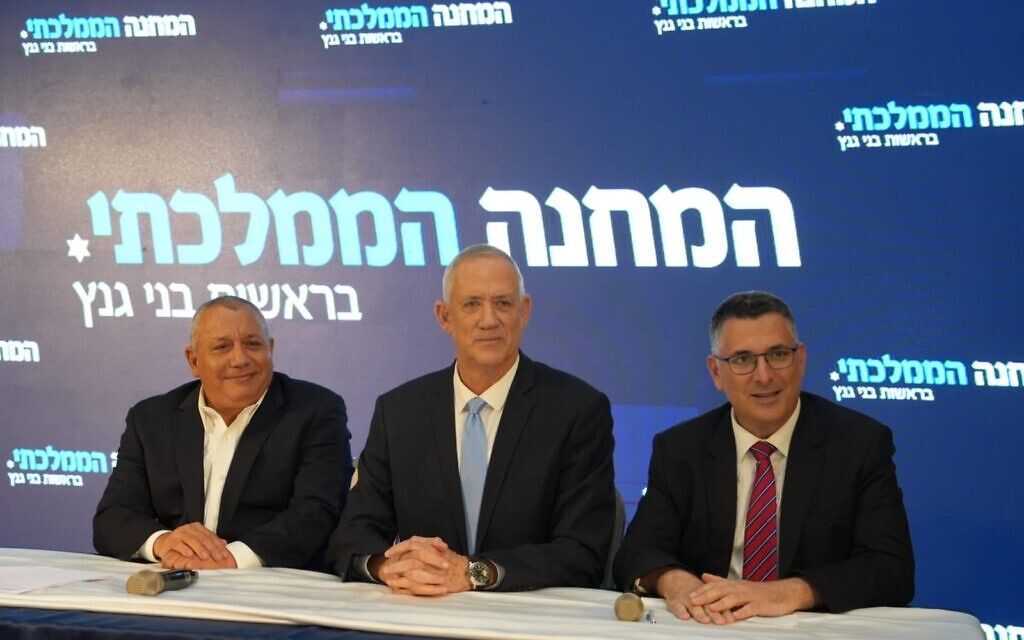 At party launch, Eisenkot talks about separation from Palestinians and minority rights

Former IDF Chief of Staff Gadi Eisenkot underlined his commitment to minority rights and the need to separate from the Palestinians, during a press conference launching the National Unity Party on Sunday evening.

The new party, a merger of Defense Minister Benny Gantz’s Blue and White and Justice Minister Gideon Saar’s New Hope, along with Eizenkot and his allies, has presented itself as a moderate center-right formation capable of forming a broad and stable government despite the deep political divide in the country.

But Eisenkot was not shy about addressing his concerns about the continued failure to resolve the conflict with the Palestinians, which has received little attention from centrist parties during more than three years of political stalemate.

“I believe that the nation-state of the Jewish people must provide equal rights to all its citizens regardless of religion, race or gender,” Eisenkot said in an implied rebuke to far-right opposition parties who are hostile to Israel’s policy. Arab population.

Such an eventuality would be “a danger to the Zionist project”, he said.

“We must preserve Israel as Jewish, democratic and equal, and we must do so by taking the initiative,” he added.

The former general has all but ruled out serving in government with opposition leader Benjamin Netanyahu, due to his ongoing corruption trial, saying a public figure ‘cannot run for public office’ when she is indicted.

“It’s not part of the standards we want for ourselves as a democratic country that upholds the rule of law,” he said.

Gantz, who introduced Eisenkot and showered him with praise, took the opportunity to point out what he called extremists in the right-wing bloc and to insist that any new government must exclude them power.

“I think we can very well hold the elections and thus block an extremist government that will endanger democracy in the State of Israel,” the defense minister said.

He also argued that if Netanyahu cannot form a government after the November vote, ultra-Orthodox parties, which have so far remained loyal to the former prime minister and his Likud party, would be willing to join. a centrist coalition.

“I don’t exclude anyone, I have great respect for the ultra-Orthodox who have preserved Jewish tradition for many years and who are a crucial and inseparable part of Israeli society.”

Saar was questioned at the press conference about the incompatibility of his policy of opposing a Palestinian state with that of Eisenkot, whose emphasis on separation from the Palestinians indicates he supports such a state.

Sa’ar countered that the establishment of a Palestinian state is not realistically within reach, and therefore there would be no friction between him and Eisenkot.

Sa’ar said that any national unity government he participates in would instead focus on “reducing the conflict” with the Palestinians and increasing their autonomy.

Along the same lines, he argued that the new party could be the political home for an ideologically diverse set of voters.

“This movement can and will be a home for all who are faithful to the original values ​​of the Zionist movement in its various forms: revisionist Zionism, the labor movement and religious Zionism. And it will also be a home for all citizens of Israel, regardless of religion or ethnicity. It will be a democratic home and we will strive for unity among the people.

Supporting The Times of Israel is not a transaction for an online service, like subscribing to Netflix. The ToI Community is for people like you who care about a common good: to ensure that balanced and responsible coverage of Israel continues to be freely available to millions of people around the world.

Of course, we’ll remove all ads from your page and you’ll unlock access to great community-only content. But your support gives you something deeper than that: the pride of joining something that really matters.

Join the Times of Israel community