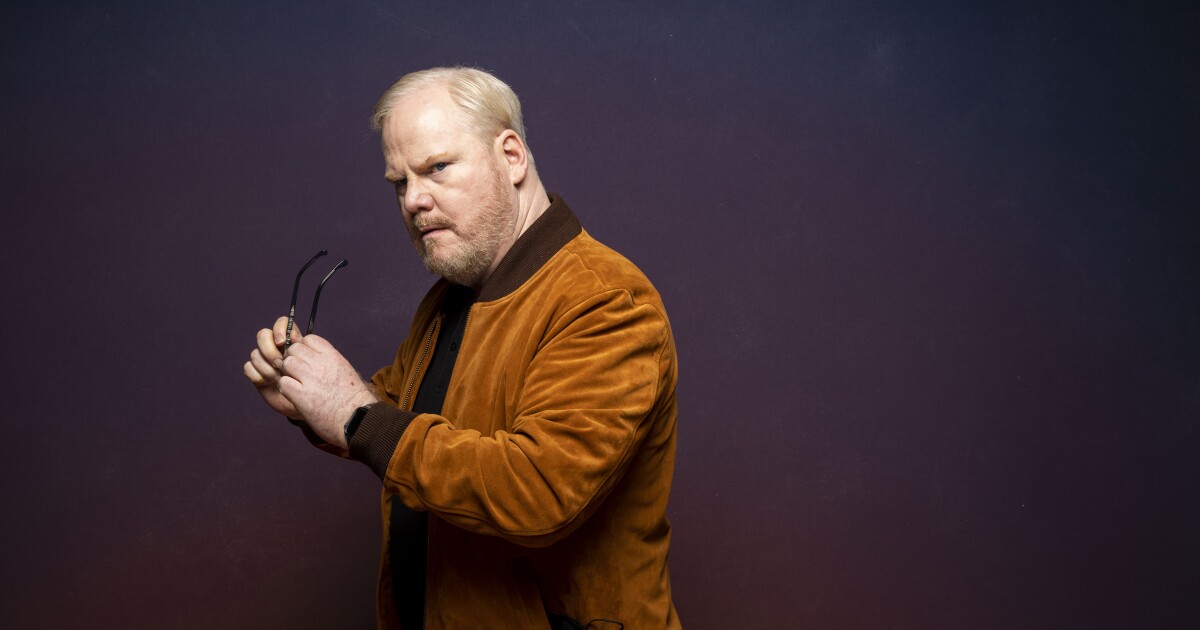 Hello and welcome to the UT Arts & Culture newsletter.

I am David L. Coddon, and here’s your guide to all the essentials in San Diego arts and culture this week.

You must be confident enough in your act to call your road show “The Fun Tour”. If a stand-up comedian can deliver on that promise, it’s Jim Gaffigan.

The guy who made Hot Pockets a punchline and who joked that his two favorite things to do were “eating and standing still” is bringing this tour to town Sunday night for a performance at the Cal Coast Credit Union Open Air Theater in San Diego State University.

Gaffigan, whose act is hilarious but still harmless, jokes a lot about food and his affection for it, but his observational humor runs the gamut from beauty culture self-deception to the chilling reality of hotel swimming pools. In his latest Netflix special, “Comedy Monster,” Gaffigan takes a topic as dark as wearing a pandemic mask and turns it into comedy gold.

Although Gaffigan starred in his own sitcom for two seasons on the TV Land network, even some of his fans don’t know that he has an extensive background as an actor with over 100 screen appearances, big and small. small, since 1998. He is best remembered in the 2009 cinematic comedy “Away We Go,” in which he and Allison Janney played a rude married couple. How’s that for a comedy duo?

But Gaffigan is getting serious in the thriller “Collide,” which opened in select theaters last week and goes to video on demand starting tomorrow. His role as a husband burned by infidelity is not his first dramatic role, but it is perhaps the darkest.

He will probably have fun with him on Sunday.

Bakersfield tends to be the butt of a lot of jokes, but give it a break. Bakersfield gave us Crackerthe smartest band to emerge in the early 90s and an outfit still going strong.

Fusing punk, roots music and undertones of country, the band fronted by David Lowery and Johnny Hickman delivered unlikely alt-radio staples with songs like “Eurotrash Girl,” “Kerosene Hat,” and the legendary “Teen Angst (What the The world needs now).

Cracker returns Sunday to a place he’s played multiple times before, the Belly Up Tavern in Solana Beach.

Due to being filmed in part at the Hotel del Coronado, the 1959 comedy classic “Some Like It Hot” will forever be linked to the resort town across the bay from San Diego. You can enjoy both when the hotel’s summer “Movies on the Beach” series continues on Saturday nights with a screening of “Some Like It Hot.”

The Billy Wilder-led adventure has it all: The Hotel Del (replacing a resort in Miami). Jack Lemmon and Tony Curtis in drag. Marilyn Monroe. Saturday’s screening will take place under the stars on the hotel’s Del Beach. Tickets are $25. Reservations required.

Half of the most famous investigative journalism team of the 20th century, Bob Woodwardwill be at the Balboa Theater downtown on Sunday for a conversation with Matthew Hall of the Union-Tribune titled “Bob Woodward: An Evening with a Legend. How We Got Here – Lessons from Ten Presidents.”

As you know, it was Washington Post journalist Woodward, along with his partner Carl Bernstein, who blew the lid off the Watergate scandal of the 1970s. Since then, Woodward, who is still deputy editor of The Post , has written about the presidency in numerous best-selling books, including two — “Fear: Trump in the White House” and “Rage” — about Donald’s tenure. His most recent book, co-authored with former Post reporter Robert Costa, is “Peril,” chronicling the turbulent transition from Trump to Biden.

I finally went to the renovated and expanded San Diego Museum of Contemporary Art in La Jolla — granted, three months after its grand reopening. I should have left earlier. It’s awesome.

The ‘new’ museum complex is bigger, brighter and makes even better use of its seaside location. The extra space also means more artwork inside, the often daring kind that has always done of MCASD the museum in San Diego that I appreciate the most.

During my visit, I attended the liquidation of the extensive exhibition of paintings and sculptures by Niki de Saint Phalle. I look forward to the museum’s next major exhibit, “Alexis Smith: The American Way,” which opens September 15.

By the way, this Sunday is MCASD’s free “Second Sunday” for the month of August, with no admission charge. If you haven’t been to the renovated museum yourself yet, this is a great opportunity to do so. Sunday at 10 a.m. is also child-friendly “Prebys Play Day”.

READ MORE: Then there was the light: the breath-inducing MCASD campus in La Jolla is ready for the grand reopening

The LOT at Liberty Station is hosting screenings of a San Diego Ballet film titled “The Moving Image” tonight. The 30-minute work captures SDB video projects created during the pandemic, directed by Javier Velasco and filmed in well-known locations around San Diego.

Screenings of “The Moving Image,” which features the music of local jazzman Gilbert Castellanos, will take place at 6 p.m. and 6:45 p.m. Tickets are $40 and include an after-show reception.

Trombone shorts has yet to find a way to bring its concert audience to New Orleans, at least not literally. So he’s doing what’s best in bringing New Orleans to audiences nationwide. His 2022 Voodoo Threauxdown Tour, which includes a show tonight, Wednesday, at the nearly 18,000-seat Hollywood Bowl in Los Angeles and a performance Sunday in San Diego at the 4,718-seat Rady Shell at Jacobs Park. The tour includes several dozen musicians in five groups, as well as three guest solo artists. Each is a vibrant mainstay of the Big Easy’s famously rich and varied music scene.

“Be Natural: The Untold Story of Alice Guy-Blache”: Director/co-writer Pamela B. Green and producer/co-writer Joan Simon discuss their documentary “Be Natural: The Untold of Alice Guy-Blaché.” Green and Simon explain the 10-year research process to make the documentary, as well as their respective inspirations for learning more about Alice Guy-Blaché’s pioneering cinema. Green also discusses his unique approach to directing which was to relay film history as a “detective narrative” by involving the audience in his archival work. Simon talks in detail about the feminist scholars and film festivals that introduced Guy-Blaché’s films to academia, and how many of Guy-Blaché’s contributions to early cinema are often overlooked.

“Generational Change and the American Language”: What is the nature of American English in its most recent forms? How does generational distance affect language shifts? What is the relationship between digital culture and everyday and professional forms of expression? How can studying the history of English over the past centuries help us understand the changes we see today? Seth Lerer, Professor Emeritus of Literature and Dean Emeritus of Arts and Humanities at UC San Diego, addresses these questions and provokes a discussion of the most recent features of the American vernacular.

“Teaching data science: access, ethics and inclusion”: Simply put, data science is the scientific process of extracting value from data. But who has access to this data and what can be done with it? Shannon Ellis, Ph.D., shares how she trains undergraduates to become effective, inclusive, and ethical data scientists. She explains how data can be used, the limitations of data science, and the barriers and biases that can shape data sets and potential conclusions.

And finally: the best events of the weekend

Here are the best events of the weekend.

Coddon is a freelance writer.