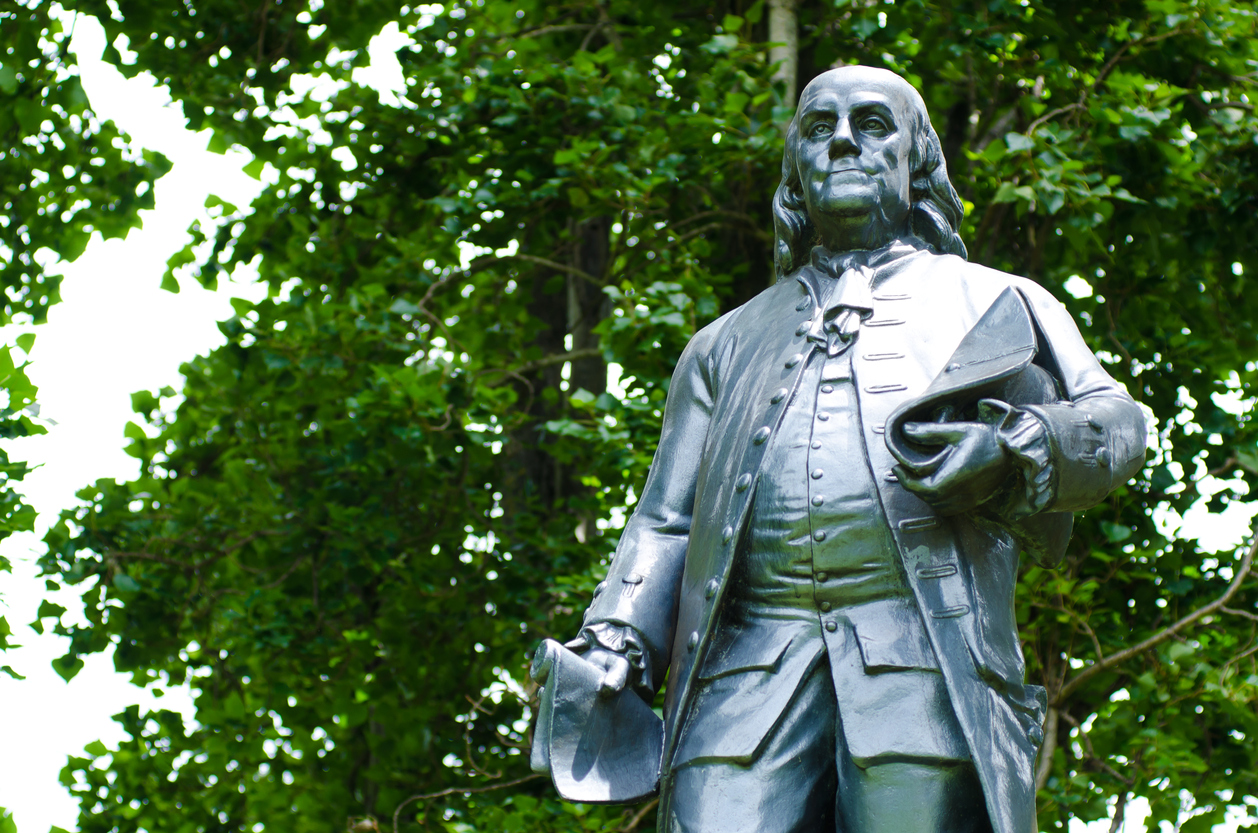 An oversight by Benjamin Franklin

Although the musar (Jewish moral discipline and ethical refinement) classic Sefer Heshbon Hanefesh (Spiritual Accounting Book) has been reprinted numerous times and in many places since its first anonymous publication in 1808, as far as I know only the 2015 edition published by the Mossad Harav Kook of Jerusalem has contained any acknowledgment that this Hebrew text is taken from the writings of the American founding father Benjamin Franklin (January 17, 1706 to April 17, 1790). Readers choosing other available editions (including the 1995 Hebrew-English edition of Feldheim Publishers) needed outside information to make the connection between Franklin and Judaism.

Never miss the best stories and events! To have Boston Jew this week.

Franklin’s influence on Judaism occurred posthumously, primarily through his famous autobiography. In the second part of the autobiography, the nearly 80-year-old revolutionary recounts how, when he was younger in his twenties, he devised a program to break his bad habits and replace them with better ones. His one-year, quarterly-repeated self-reform program focused on 13 virtues, each of which received a week of special attention. Progress and failures in their acquisition were tracked using daily markings in grid graphs showing the seven days of the week horizontally and the desired 13 lines vertically. After 13 weeks, the cycle started again, so that in one year each trait had been carefully worked for four weeks.

Franklin chose to focus on the following virtues:

Very early on, Franklin realized that his method could be of great benefit to others. He had intended to develop it and publish it in book form, recalling in his autobiography: “I should have called my BOOK ART. of virtue. “Still passionate about fraternities and secret societies, Franklin even plans to form a new international secret society of fraternity and mutual aid,” the Society of Free and easy”, Whose initiates would profess a belief in a generic religious creed – so that men of all faiths could adhere to it – and follow“ the Thirteen Weeks of Virtues Examination and Practice ”. But Franklin, who was a busy man, died without completing a book on virtue or forming a worldwide fellowship.

With the release of Heshbon Hanefesh, Rabbi Menahem Mendel Lefin of Satanów (1749-1826), an elder from Eastern Europe maskil (promoter of the Jewish Enlightenment), presented Franklin’s Art of Virtue to a Jewish audience reading Hebrew. Rabbis and Jewish scholars have since often been oblivious, confused, or uncomfortable to recognize Franklin’s influence on Judaism, while Franklin scholars have largely ignored him.

In recent years, some Orthodox Jews have also become uncomfortable with the idea that Lefin could have been a maskil, as well as uncomfortable with the idea that musar book based on the writings of a non-Jew could have received broad rabbinical approval and formed part of the Jewish canon. A seemingly calming Orthodox Jewish response was to largely eliminate Franklin or Lefin from the history of musar.

Rabbis and Jewish scholars have since often been oblivious, confused, or uncomfortable to recognize Franklin’s influence on Judaism, while Franklin scholars have largely ignored him.

Although Lefin categorically stated in Heshbon Hanefesh (which, as mentioned, was first published anonymously) that his innovative method was not his own invention, he did not name Franklin or quote the autobiography there. (However, he did so in some of his unpublished writings). part. Deliberate or not, this omission contributed to the widespread oblivion by Jews that Franklin was a native Heshbon Hanefeshcentral method.

Always, Heshbon HanefeshFranklin’s connection to Franklin has long been written by some (myself included) interested in Lefin’s work and in musar. A few years after its publication, Lefin’s companion maskil Jacob Samuel Bick congratulated Heshbon Hanefeshin a Hebrew letter from 1815, as follows: “A wonderful technique invented by sage Benjamin Franklin of the city of Philadelphia in North America. This scholar is renowned in all corners of the earth.

Bick also endorsed Lefin’s decision to incorporate the beneficial ethical technique invented by a non-Jewish scholar into his Hebrew work, making it accessible to the Jewish nation: “The Light of a Lamp Lit by a Gentile [for himself on the Sabbath] can also be used by a Jew. ‘ And so R[abbi] Mendel prepared a delicacy for his nation … and taught a simple and clear solution for the broken but still precious soul to quickly return from evil to good. In their approval, the rabbis of the generation said that this thing is beneficial and new. And the nation answered in its turn: Sanctified! Sanctified!

The connection between Franklin and Lefin was also the subject of subsequent academic reflection. Hillel Levine of Boston University, for example, wrote his doctoral dissertation on “Menahem Mendel Lefin: A Case Study of Judaism and Modernization” (1974) at Harvard University. Two decades later, Nancy Sinkoff of Rutgers University wrote her doctoral thesis on “Tradition and Transition: Satanów’s Mendel Lefin and the Beginnings of the Jewish Enlightenment in Eastern Europe, 1749-1826” (1996) at Columbia University. (Sinkoff’s 2004 book “Out of the Shtetl: Making Jews Modern in the Polish Borderlands”, which builds on his thesis, was recently updated with a new preface and republished, and is available for free download via Brown Judaic Studies and JSTOR.)

Contrary to these academic works, the Hebrew-English edition of Heshbon Hanefesh published by Feldheim Publishers in 1995 is silent on Franklin’s influence. In addition, its back cover gives a misleading image of Heshbon Hanefeshthe method of constructing the character of, suggesting – unlike Lefin’s own words of how the method preceded it – that it is unique to Heshbon Hanefesh, was formulated by Lefin, and was designed for religious Jews: “CHESHBON HANEFESH, first published in Lemberg in 1812 [sic], presents a unique system of self-improvement and development of positive character traits. Using sophisticated psychological techniques and charts to monitor his progress, this method was designed specifically for bnei Torah [i.e., those intensively engaged in the study of Torah] and is as applicable today as it was when it was first formulated almost 200 years ago.

The Hebrew-English edition of Heshbon Hanefesh published by Feldheim Publishers in 1995 is silent on Franklin’s influence.

Not only is any mention of Franklin’s Art of Virtue missing from the Feldheim edition, but all biographical information on Lefin’s affiliation with the Haskalah movement (the Jewish Enlightenment) has also been omitted. (The editor of the 2015 Mossad Harav Kook, who notes in his preface that Lefin’s text is based on Franklin’s handwriting, was also unwilling to identify Lefin as a maskil.)

A more striking illustration of such oversight is evident in a popular poster published by Torah Umesorah (the National Society of Hebrew Day Schools), in which neither Franklin nor Lefin are recognized alongside the “13 Middos” (or midot, i.e. character traits). Instead, in what has become common among some contemporary Orthodox Jews, the character traits of these posters (as well as in decorative artwork features sometimes found in Orthodox Jewish homes) are attributed to Rabbi Israel ( Yisroel) Salanter (1809-1883), the father of the Musar movement. This is also how they are introduced to students at Providence Hebrew Day School, the Orthodox Jewish school in Rhode Island, where I live. Just as Franklin was excluded from Heshbon Hanefesh, he and Lefin are excluded from the “13 Middos” listed in alphabetical order.

Meanwhile, although Rabbi Meir Soloveichik et al. “Proclaiming Freedom Across the Country – The Hebrew Bible in the United States: A Reference Book” in 2019 contains a lengthy excerpt from Franklin’s autobiography regarding his attempts to achieve virtue and his self-improvement method— thus implying that they were primarily inspired by Jewish scriptures — the book completely ignores Franklin’s influence on Jewish religious texts.

There is a long tradition of using and abusing Franklin’s legacy to support a variety of causes. I have written about how anti-Semites have exploited Franklin’s reputation since 1934. One of the most deliberately ironic passages in Ray Bradbury’s dystopian 1953 book “Fahrenheit 451” describes the revisionist story of the firefighters of America, whose job in the novel — now that the houses have been fireproofed — is to set the country’s literature on fire: “Established, 1790, to burn English-influenced books in the colonies.” First firefighter: Benjamin Franklin. (Franklin, who as a younger man helped found both Philadelphia’s first library and the first firefighting organization, was 84 in 1790, by which time the colonies had of course already become independent of the England.) Franklin could do without much of the “credit.” ‘it has been given since his death.

But he is to be appreciated for posthumously inspiring Rabbi Menahem Mendel Lefin and for bequeathing to Judaism a new method of beneficial self-improvement.

An earlier version of this article appeared in UK magazine Jewthink on April 16, 2021. “Benjamin Franklin’s Influence on Mussar’s Thought and Practice: A Chronicle of Misunderstanding” by Shai Afsai was published in Review of Rabbinic Judaism 22: 2 (September 2019), pp. 228-276. See here for more on Benjamin Franklin and Judaism.

Never miss the best stories and events! To have Boston Jew this week.

This message was provided by a third party. Opinions, facts and any media content are presented solely by the author, and JewishBoston assumes no responsibility for them. Want to add your voice to the conversation? Publish your own post here.

Rabbi Elizabeth Hersh: Embrace the Music and Dance of Faith