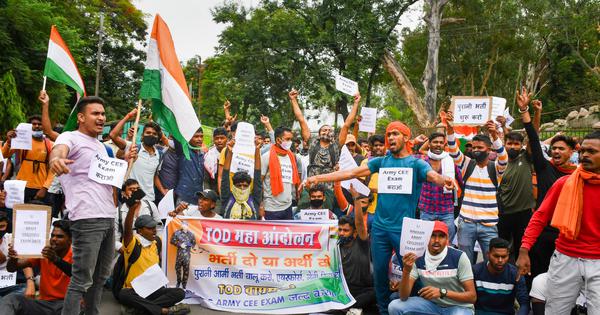 Days before stepping down as army chief of staff in April, General MM Naravane issued a nuanced appeal to the nation: that the expenses of the armed forces not be seen as a burden on the Indian economy.

It was more than a sentimental plea from an outgoing leader. Instead, it appeared to be a mild protest against the many moves — overt and covert — aimed at tightening the purse strings of one of the world’s greatest military establishments.

While Naravane was integral to the senior defense leadership that had conceptualized policies to facilitate a “lean and medium army”, the caution he expressed might have betrayed the unease in military circles over the sweeping transformations which could diminish the power of India’s armed forces.

On Tuesday, the government finally announced the Agnipath program – an ultra-short service plan to attract “young, patriotic and motivated people to serve in the armed forces for four years” – and said that this policy will “from now on govern the enlistment for all three services.” With this, the Armed Forces are being forced into transformative reforms that will significantly alter their workforce profile and combat capabilities.

Long seen as the “tour of duty” program, Agnipath is latest on the list of fiscal prudence strategies meant to deal with what is described as rising defense pension costs, periodic salary and employee reviews. other emoluments for defense personnel.

By supplanting the established cycle of permanent commission for the lower ranks of the forces as lifetime or pensionable service, Agnipath seeks to realign the cadre structure. It will create a pool of semi-skilled and partially trained militarized youth who could either fill the regular force inventory in limited numbers through a distilled selection corridor, or return to civilian life in large numbers as “disciplined youth.” and patriotic” that should find their own way, notwithstanding the many avenues that have been promised.

The policy states that personnel under the program, Agniveers will be a separate and different segment from other ranks – although it is clear that Agnipath will eventually be the central pool from which other regular non-commissioned officer ranks will be drawn. recruited. At the end of the four-year term, 25% of each cohort will be able to apply for regular positions.

The announcement that more than 46,000 Agniveers will be recruited in the program’s first year, as opposed to current estimates of more than 65,000 annual force vacancies, is a significant indicator of how the program will be the only junior gateway to the armed forces. .

Although the policy statement says little about the proportion that short-lived Agniveers will eventually occupy in the overall force structure, a later clarification from the Deputy Army Chief of Staff that these recruits will constitute 50% forces not only confirms the centrality of this realignment of cadres but also the certainty of an improvised fighting cadre in the making.

Indeed, even when touted as a sweeping measure with promising payoffs, the program risks turning the world’s second-largest military in terms of active-duty members into a ragtag force of trainee soldiers who will be called upon to fight as professional soldiers without undergoing long-lasting routines of rigorous training and development.

Adding to the program’s ambiguity are vaguely stated goals like ensuring the “availability of qualified personnel to enhance national security in times of external threats, internal threats, and national disasters.” While this may imply that demobilized Agniveers will need to be available on call for all forms of national duty, the policy statement omits any explanation as to whether a dedicated reserve force is planned or whether discharged Agniveers are to be housed. in the paramilitary. disaster management services, police forces or agencies.

The range of later statements – of preferential treatment for Agniveers in Central Paramilitary Service recruiting, later clarified as 10% of the recruiting share – only indicates the off-the-cuff manner in which this important policy was crafted. . What the government, however, fails to understand is that these are not the avenues sought by the legion of aspirants to whom such proposals look like chaff as they crave bread.

The consequences of such an ill-conceived policy are bound to be disastrous. Many military veterans have sounded the alarm over the serious implications for regimental cohesion, combat prowess as well as training practices. The risk of structural atrophy of force inventories and unit manning, with far-reaching consequences for operational readiness and combat capabilities in an unrelenting two-pronged threat matrix, cannot be overstated.

The values ​​of racy training, the brotherhood of regimental cultures and the commitment to sacrifice in the service of the nation are elements that risk being compromised.

The key impetus behind the Agnipath would be the colossal defense pension expenditures which had increased dramatically following the implementation of the One Rank One Pension scheme to provide the “same pension, for the same rank, for the same length of service, regardless of retirement date. Ironically, it was Prime Minister Narendra Modi who vehemently espoused the cause of OROP in the run-up to the 2014 general election. employment to eliminate the social security obligations that the government has traditionally fulfilled.

The Agnipath plan is part of the government’s neo-capitalist economic program which promotes absolute laissez-faire through extensive privatization, including strategic sectors, and diminishes the role of government as a job provider. . The market economy may dictate that the government withdraws from the management of companies; however, extending this logic to crucial affairs of state in order to reduce spending does not bode well. As a stealth-launched cost-cutting measure, the Agnipath program was seen as the government’s efforts to seek thrift at the expense of national security.

Although successive governments have seen privatization as a panacea to solve the acute problems of research, development and production of defense technologies, the budgetary strategy of restructuring the fundamental structures of emoluments and proposing models of recruitment unsound amounts to touching the very foundations of the functioning of the armed forces whose main force happens to be its workforce.

The Modi government is already being criticized for its aversion to pro-worker policies and its stoic reluctance to create public sector jobs. Systems like Agnipath reinforce the perception that government approaches all aspects of governance solely through the prism of financial sustainability and profit.

Having projected himself as the guardian of the interests of the armed forces, Prime Minister Modi however erred in fiddling with supposedly sacrosanct traditions. After all, the armed forces of nations are meant to operate on the basis of a social contract in which the nation undertakes to protect the well-being of the soldier and his family, whether they survive or reach martyrdom in the service of the nation. Any attempt to reverse this construct has sociopolitical repercussions, as evidenced by the spontaneous protests that have gripped the nation, especially from voters who perceive the government as the essential provider of jobs and social security.

While conscription is about compulsory military service in the youthful years, Agnipath envisions an Indian version of drafting that seeks to identify and attract only “patriotic,” “motivated,” and “technologically savvy” young people into the armed forces, thus implicitly implying certain currents of exclusion. . Departing from the conventional wisdom that the armed forces are an avenue for secure job and career opportunities, Agnipath seems purely driven by the goals of cutting public spending through temporary employment.

Promises to train them and reintegrate them into society as a disciplined and motivated workforce are mere hyperbole, as life in the armed forces will be more about combat skills than a flat -form of professional learning – despite claims that the armed forces will equip themselves to train recruits with skills that will be useful in an unforgiving corporate environment.

Even the proclaimed virtues of self-discipline and diligence seem magnified because they are not values ​​ingrained solely by the armed forces, nor have generations of ex-servicemen brought about sweeping transformations in civil society in terms of such values. Thus, the supposed dividends of short military service have been vastly exaggerated in order to justify the specious thinking behind the Agnipath plan.

What seems disconcerting, however, is the invocation of highly politicized slogans like “josh” (zeal) and “jazba” (passion), which could be an indicator of the inherent desire to promote militarism in society with the Agniveers in civilian attire expected. to feed the already pervasive hyper-nationalist fervor in the country. Such possibilities cannot be ruled out given the emphasis on ‘patriotism’ throughout the program.

Nevertheless, if the government assumes that there are sections of young people who are inspired to serve in the armed forces for a short time and return to civilian life, Agnipath should only be a complementary route – not the route essential.

Regardless of the outcome of this initiative, the manner in which the policy was enacted without informed public discourse or parliamentary debate is an ominous sign of how critical national security decisions have been left to the whims of political dispensation. .

A Vinod Kumar is a defense analyst based in Delhi.

When death becomes life. The will of the Holy Land… | by Daniel Mark Harrison | June 2022