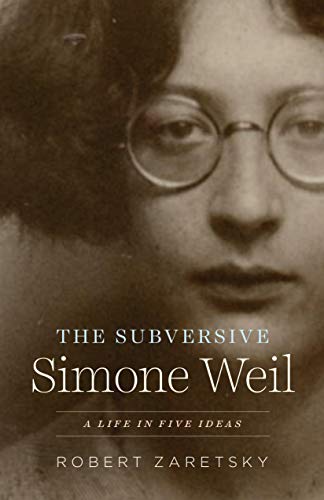 A review of The Subversive Simone Weil

A life in five ideas

It is commonplace to note the contradictions in the life of Simone Weil. She was an anarchist and conservative, pacifist and fighter, French patriot and critic of France, a Jew buried in the Catholic section of an English cemetery. Robert Zaretsky believes that these contradictions reflect “inevitable tensions” that arose as Weil inhabited his philosophical beliefs. For her, philosophy could not be a mere academic discipline; it had to be a “way of life”. You had to accept the consequences of the truth that you were saying, you had to live with them, and that was complicated.

Zaretsky begins his brief study of Weil by describing the arc of his short life. Born in Paris, she grew up with non-practicing Jewish parents who had fled the Russian pogroms and who were both cultured and well-off. They also raised a child whose passions—virtually from day one—much like those of a Hebrew prophet. Zaretsky fully acknowledges but oddly downplays the religious coloring of her life and thus describes Weil’s schoolgirl identification with “striking workers” and her lifelong commitment to justice without noting this comparison. Yet in compelling and graceful prose, he offers a vivid picture of someone who uncompromisingly embraced human pain and sought both to identify with it and to act for its relief.

Detailed biographies of Weil already exist, and with this in mind, Zaretsky is quick to approach his main work of exploring “a small number of central themes in his thought”. He devotes a chapter to each, beginning with Weil’s analysis of affliction.

After graduating from the elite École Normale Supérieure in Paris, Weil briefly taught in three provincial towns, traveling on evenings from one to teach literature at a nearby factory worker cooperative. Fluency in the language, she believed, would enrich and empower the workers she was determined to understand. Soon she applied for a factory job. The bewildered owner – who understood the elite education, having received one himself – assigned her to a “dab press”. Weil’s diary soon suggested that satisfying work involves initiative and thought – and that factories suppress just those abilities. Machines serve implacable economic and production goals by exerting dehumanizing pressure on workers, even bosses and owners. People have little or no time to think; their work, in any case, does not require reflection. Turned into mere things, they feel both anxious and ashamed.

The result is a form of suffering called Weil affliction, an overwhelming sense of brokenness and degradation. If, as Zaretsky will agree, his account of the factory experience seems a little short of nuance, it still captures the horror of oppression unadulterated. In their attempt to achieve unanimity through coercion, totalitarian states, for example, turn humans into things – or sometimes into ashes. When human strength evokes “extreme affliction”, it can deprive people of the “power to say ‘I'”.

The book then addresses Weil’s insistence on the ethical dimension of knowledge. Being informed is an obligation – otherwise one can, she says, be complicit in evil – and the key to knowing this is what she calls Warning. More than a muscular effort of concentration, true attention is a gaze free from selfish reflex. To fully see what we may have learned not to see—and not want to see—requires, Weil said, “the rarest and purest form of generosity.” We need to let go of ourselves, or what Weil admirer Iris Murdoch, an atheist philosopher and novelist, called the “big, unrelenting ego,” and turn to the world, to the other. Deep knowledge therefore requires spiritual discipline, a prolonged and difficult awareness that there is more than me.

The third of the central themes that Zaretsky considers is resistance. Weil believed that the risk of anarchy requires a commitment to obedience in civil society, but not mere surrender. The “collective”—the groupings and related cultural forces that induce intellectual sleep and strip thought—must be met with suspicion and possible defiance from citizens. Disciplined, thought-based resistance is a protection against tyranny. He must resist the temptation of inertia and the wishful thinking that things will work out until we do something. When it comes to upholding justice and truth, and when there is no other recourse, the resistance must be prepared to break the law. Faced with a choice between moral duty and civil law, Antigone, from the eponymous Greek tragedy, declares: “I will not be moderate”.

Antigone’s example inspired what Zaretsky calls Weil’s “immoderate attachment” to his own ideals. And because such an attachment involves thought and faces complications, it brought her into conflict with herself. Even in the face of the rise of Nazism, Weil initially despised the warmongers: armaments only produced massacres. Later, fearing complicity with evil, she changed her mind and at one point found herself carrying a gun against Franco during the Spanish Civil War.

Even then, however, the conscience left her in conflict with herself. She told a friend: “Fortunately, I’m so nearsighted that there’s no risk of me killing others, even when I’m aiming at them. And she complained about the atrocities on her side as well as the other. “Never once,” she said in a letter, did someone in her hearing express “revulsion or disgust or even disapproval of unnecessary bloodshed.” If resistance is necessary, it is also, as his thought and his life attest, morally troubling.

What Weil called “the need for grounding” is the next theme of the book. Here, Weil comes across as conservative – her problem is the extent and nature of true patriotism – but she does so in a way nationalists would find deeply difficult. Civic health, she argues, cannot emerge from moral abstractions or purely economic motivations. Civic health requires a local or geographically delineated cultural center – some sense, in other words, of home and place. This center, or in Weil’s basic metaphor, the root system, fulfills both material need and the need for identity and purpose. For her, the uprooting – which France and other parts of Europe faced as a result of Nazi aggression – leaves behind only “ruins and despair”, as Zaretsky puts it, that “atomization and anomie”.

But while Weil affirms a patriotic love of home and place, she repudiates “the lies and contradictions that corrode the idea of ​​patriotism.” She was disgusted by French imperialism and colonization. Nor could she accept the thought of the nation as an “absolute value.” True patriotism recognizes the faults and crimes of home and place. True patriotism, indeed, sustains compassion for all. Compassion, writes Weil, can “cross borders, extend to all countries in distress, to all countries without exception”. All people, after all, “are subject to the misery of our human condition.” The need to repel the German occupiers coexists with the duty to consider Germans as human beings. The “obligation” – for Weil, a crucial word – to meet human needs always prevails, whatever the circumstances.

Zaretsky then resumes Weil’s slow, though equally incomplete, turn to Catholicism. Religion had fascinated her since she was a student. Later, key mystical experiences, one while visiting a chapel in Assisi and two while attending deeply evocative liturgical services, awakened in her a sense of the divine. This led, in the five years before his death at 34, to what Zaretsky calls “a brilliant and often murderous dialogue with Christianity”. From the letters to his two main interlocutors came the surprising notes and aphorisms collected in his posthumous publication Waiting for God and gravity and grace. And if in these and other works Weil’s perspective is sometimes disturbing, as Zaretsky is quick to say, one of the reasons is what transpires from the beginning to the end of his book: the relentless moral severity of Weill. We humans offer a world in which we can love God, and to love God is to wage an unceasing war against oneself, against the “me” in pursuit of its own ends.

Zaretsky skips over the basic metaphysical question – does God really help us? — and instead spends much of this chapter interpreting Weil through the lens of his great admirer Iris Murdoch. Murdoch believed that “God” was just an idea invented “to make the difficult task of virtue easier and more attractive”. What remains, however, is the idea of ​​’Good’, or the morally perfect. If we make that idea the object of contemplation, Murdoch argues, it can help us “pierce the veil of selfish awareness.” But she is quick to add that empirical evidence about human nature shows that our efforts here “cannot be entirely successful.”

To this, Zaretsky responds with the story of the Christians in Chambon-sur-Lignon, France, who saved some 3,000 Jews from Nazi death. Their the vision was clear; they or they read the world correctly. Here, however, Zaretsky fails to mention two points. One is Weil’s double conviction, expressed in The need for roots, his vision of a post-war France – that God ensures a universe in which “good prevails over evil” and that, by a “particular will”, God inspires the soul to holiness. The other is that Le Chambon pastor André Trocmé carefully trained his congregation in the story of Jesus, emphasizing the themes of non-violence and universal love. It turns out that the congregation’s vision was based on narrative, nurtured by tradition.

Neither narrative nor tradition plays a significant role in Zaretsky’s exploration of the “subversive Weil.” The concepts can, I think, be implied in her pleas for ‘home’ and ‘place’, but a more explicit consideration of these would generate a more fruitful engagement of this woman’s amazing life and thought. .

The association between midlife lifestyle and psychiatrist-diagnosed depression later in life: Who in your family reduces the risk of depression?