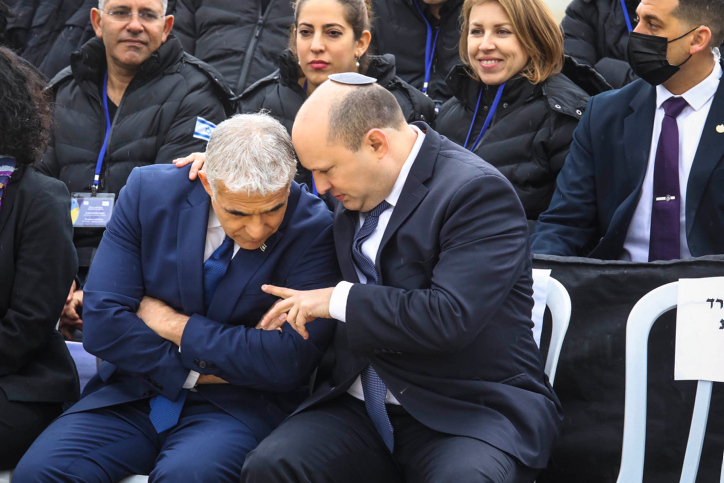 420 rabbis call for the overthrow of the Lapid-Bennett government which “endangers the very existence of the Jewish people” | The Jewish Press – JewishPress.com | David Israel | 21 Iyar 5782 – 22 May 2022

The Rabbinical Peace Congress, founded in 1993 “to alert the public to the clear position of the Torah regarding territories under Israeli rule”, issued a proclamation on Sunday signed by 420 “eminent Torah scholars, religious judges and local and municipal rabbis across Israel,” announcing that “the very existence of a government that relies on the votes of Arab parties, which themselves support terrorism, only further emboldens terrorists to commit bombings and murdering innocent citizens. This fact is not only clear in the Torah, but it is obvious to anyone who cares to see the truth that our enemies are raising their heads and brazenly attacking the Jews in every corner of the world. ‘Israel, without fear of reprisals.

Citing their group’s motto, “Pikuach Nefesh,” the halachic principle that the preservation of human life takes precedence over any other Torah commandment, the rabbis recently gathered for an emergency meeting “in light of the ‘horrible rise in terrorist attacks throughout the country, to cry out on behalf of the Jewish people‘.

They decided to send government officials and Knesset MKs their official halakhic ruling that, “every day the current administration continues to operate in the current way, it endangers the very existence of the Jewish people.” , and stating that “it is a halachic mandate for everyone to do everything in their power to bring down the current government.

“The very existence of a government that relies on the votes of Arab parties, which themselves support terrorism, only further encourages terrorists to carry out attacks and murder innocent citizens,” they said. the 420 rabbis, asserting that “this fact is not only clear from the Torah, but is obvious to anyone who cares to see the truth; that our enemies lift up their heads and brazenly attack the Jews in every corner of Israel, without fear of reprisals.

The group claimed that “even without the Joint List ‘partnership’, the mere existence of a government whose coalition members support the return of Jewish land to our enemies creates a powerful incitement to Arab terrorism.”

This one is a bit inaccurate: for one thing, there is no partnership between the Joint Arab List and the Lapid-Bennett government. And as for the parties that support handing over Jewish land to the Palestinian Authority – they make up a huge majority in the Knesset, including Likud Speaker Benjamin Netanyahu, who on June 14, 2009, at Bar Ilan University, expressed its willingness to accept a Palestinian government. alongside Israel under certain conditions.

Rabbi Avraham S. Lewin, general secretary of the “Pikuach Nefesh” Rabbinical Congress, pointed out that dozens of new rabbis recently put their signatures to the Congress’ famous halachic decision, which forbids any negotiation regarding the abandonment of Jewish lands.

“It is something unique in the history of Judaism that so many rabbis, from so many different groups and factions, have unanimously signed the same halachic decision. When it comes to saving lives Jews, there is no disagreement between us. Anyone who cares about the safety of Jewish lives in Israel should do their utmost to bring about the downfall of the current government and the establishment of a government that will act according to Torah principles,” Rabbi Lewin said.

“It’s not about whether the government is left-wing or right-wing. Rabbis should not be aligned with political parties. On the contrary, the role of a rabbi is to proclaim the word of God, through halakha. So when they see a government in power making decisions that endanger Jewish lives, they are forced to protest. We protested no less categorically for the decisions taken under the Netanyahu government. The lives of our people come first, because we uphold the Torah of Life, which protects the life of the Jewish nation,” Rabbi Lewin said.

From his mouth to the ear of God. This journalist, too, would like to see more Israeli political parties adhere to halakhic rulings. Although, if I understand the process correctly, they should probably ask first.

The chairman of the board of directors answers: “I believe” in the mission of the federation | My opinion