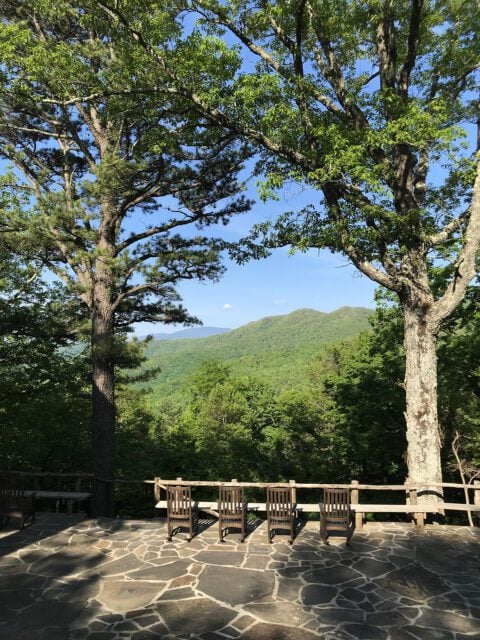 (RNS) – Summers have long been a time of camp meetings and religious revivals, a week of preaching, singing and rescuing souls in the open air.

This tradition has faded over the years, but a form of it still exists on a western North Carolina mountain off Blue Ridge Parkway. wild landsa scenic retreat at an elevation of 3,300 feet, has always combined a bit of rustic Appalachia with a progressive religious bent.

This year, he breaks new ground again as his Interfaith Institute, a 40-year-old summer tradition, convenes a three-day meeting beginning Monday, August 1, led entirely by female scholars — one Christian, one Jew and one Muslim.

The Interfaith Institute, which has long been hosted by the Association of Rabbis of Greater Carolina, was originally intended as a summer retreat where rabbis, ministers and priests could learn about other traditions in a relaxed setting.

Increasingly, it is attracting laypersons, and this year abandons the traditional lecture format for a more relaxed conversational workshop in which academics interact with attendees.

RELATED: Interfaith Trolley offers inspiration and a whirlwind tour of religion in America

This year’s theme is breath, and the three scholars will explore it beginning with the creation story of Genesis where “God formed a man from the dust of the ground and breathed into his nostrils the breath of life”. (The Quran has two related passages.)

“When we got together on Zoom to plan it, one attendee said, ‘I just want some time to catch my breath,'” said Amy Laura Hall, associate professor of Christian ethics at Duke Divinity School and director of the this year’s program for the Interfaith Institute. “We continued to gravitate around that as a theme.”

The Interfaith Institute has not met in person for two years due to the COVID pandemic. Recognizing that many people are reverting to older ways of connecting, the breath theme seemed fitting.

“The idea was to reset after the stressors of the pandemic and think about it in a bodily way,” said Anathea Portier-Young, professor of Old Testament at Duke Divinity School and one of three guest speakers. . “What does it mean to reconnect with oneself, with the community, with God? The breath is a kind of metaphorical, metonymical focal point.

Women, in particular, may have felt like they were holding their breath this summer after the Supreme Court overturned Roe v. Wade and that states have begun to cancel abortion without exemptions for rape, incest and women’s health, Hall said.

And then there are those who have also worked feverishly on racial justice in the wake of the 2020 “I can’t breathe” murder of George Floyd, she said.

“A key definition of life is the breath,” said Laura Suzanne Lieber, professor of religious studies at Duke. “But it’s never just physical; it has a soul connotation. The breath is a connective tissue.

Wildacres, with its panoramic views of the Appalachians, is literally breathtaking. The 76-year-old station, with its rustic stone pavilions (without televisions or telephones), also bears witness to the changing social and religious landscape of the South.

Its 1,200 acres were originally purchased by Thomas Dixon Jr. (1864-1946), a white supremacist Baptist minister, lawyer, writer, and filmmaker. His book, “The Clansman: A Historical Romance of the Ku Klux Klan”, was adapted by director DW Griffith into a film, “Birth of a Nation”, considered one of the most racist Hollywood films for its portrayal blacks. In the 1920s Dixon bought Wildacres, but after the stock market crash of 1929 went bankrupt.

A Texas bank eventually sold Wildacres to ID Blumenthal, a successful businessman from Charlotte, North Carolina, who was also Jewish. Blumenthal began inviting groups of artists, musicians, and writers to spend a week each at Wildacres throughout the summer. In 1972, the station became an independent non-profit organization dedicated to “improving human relationships”.

While several Christian groups also met there each summer, Jewish groups from across the Southeast adopted Wildacres as their favorite getaway. B’nai Brith, the Jewish service organization, holds an annual retreat there, as do several synagogues in the area.

The Interfaith Institute retreat was originally intended for rabbis who planned to attend their own retreat a few days later. When there were openings, lay people were also allowed to register. These days it is open to everyone.

The first Muslim speaker was invited to speak about 10 years ago.

“Some of the older Jewish rabbis were very concerned about this,” said Rabbi Edward Friedman, president of the Interfaith Institute. “Some of them said, ‘If you’re going to have Muslims there, I won’t be there.’ But that was the minority. Most people were open to learning about Islam.

This year’s Muslim speaker, his first wife, is Mona Hassan, an associate professor of Islamic studies and history at Duke University.

The Interfaith Institute would also like to attract more Muslims among the participants. The 40+ people in attendance this year (a low COVID) does not include other Muslims.

“We are not looking for religious Esperanto,” said Hall, the program director, referring to the language of international communication. “We are not afraid of the real differences between the three world religions. There are certainly politically oriented conversations. But overtly political conversations are happening alongside text conversations.

In keeping with the changing religious landscape, the institute also attracts a fair number of Unitarian Universalists as well as non-faith people curious to learn more about the different traditions.

“It’s a chance to catch your breath,” Hall said, “and leave some of the burden behind.”